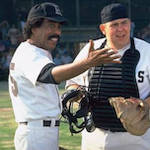 Pryor plays Monty Brewster, pitcher for the minor league baseball team the Hackensack Bulls. He and his best friend/catcher Spike Nolan (John Candy, THE SILENT PARTNER) try to be big fish in a small pond, hitting on baseball groupies at a bar after the game, but even there they’re medium-sized, overshadowed by a manlier player from the away team (Grand L. Bush, DIE HARD, LICENCE TO KILL, STREET FIGHTER). Which leads to a bar brawl, the most Walter Hill part of the movie. END_OF_DOCUMENT_TOKEN_TO_BE_REPLACED