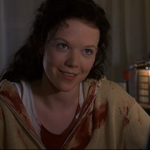 Rachel can stand up for herself but does have some vulnerabilities. Her other best friend is her basset hound Walter, and she’s embarrassed when it comes up that she’s a virgin. Although she gives lip service to the band Garbage, we hear her listening to Billie Holliday more than once. END_OF_DOCUMENT_TOKEN_TO_BE_REPLACED “I’ll be no man’s slave and no man’s whore. And if I can’t kill them all then by the gods they’ll know I tried.”

I’m not saying BARBARIAN QUEEN would be great under other circumstances either, but especially watching it right after HUNDRA it seems like kind of a waste. Obviously Roger Corman and/or his people saw that movie and thought “oh shit, we can do a CONAN rip-off but with boobs!” So it’s another sword-wielding woman who overcomes medieval evil, but you’re never really sure how pro-woman it is. As often as they have tough warrior women defeating men in sword fights they seem to have them getting pinned down and having their tops torn off. It happens so much I’m thinking maybe they think the audience is supposed to enjoy it more than root against it.

She even gets hung topless on a rack for a long period and it’s not really treated like a traumatic event. And the wort part is it seems like they could’ve done fine in the titillation department without all that shit. The costume department obviously worked really hard on all the cleavage display all throughout the movie, and then they just get shown up by these boobs ‘n torture scenes. END_OF_DOCUMENT_TOKEN_TO_BE_REPLACED