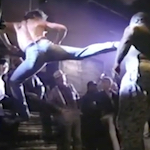 But it happens to be one of the early movies of Michael Jai White, back when he was still Michael White. After THE TOXIC AVENGER PARTs II and III he had tiny parts in TEENAGE MUTANT NINJA TURTLES II: THE SECRET OF THE OOZE (uncredited), TRUE IDENTITY, UNIVERSAL SOLDIER, and then this. So I chose this to be another tangent in my TOXIC AVENGER review series. END_OF_DOCUMENT_TOKEN_TO_BE_REPLACED 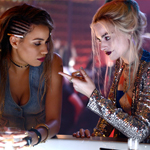 Formerly the abused girlfriend/sidekick of The Joker, this is the story of Harley’s life after breaking up with him. No longer enjoying the immunity provided by association with a famous psychopath boyfriend, Harley gets herself into trouble with various factions including but not limited to the gang run by Roman “Black Mask” Sionis (Ewan McGregor, MILES AHEAD, JANE GOT A GUN), police detective Renee Montoya (Rosie Perez, DANCE WITH THE DEVIL, Widows), somebody she punched in a roller derby bout (stuntwoman Keisha Tucker), and somebody who blames her for his face being tattooed like a clown and can’t fucking believe it when she doesn’t remember what he’s mad about (Matthew Willig, FULL CONTACT [1993], 3 FROM HELL). END_OF_DOCUMENT_TOKEN_TO_BE_REPLACED