If you don’t know Qissi you at least know his friend: he grew up with and trained with Jean-Claude Van Damme. Onscreen he most memorably played Tong Po, the villain in KICKBOXER, although he was uncredited (it said Tong Po played himself). But here is his first try at directing (he did one other, 2001’s EXTREME FORCE). 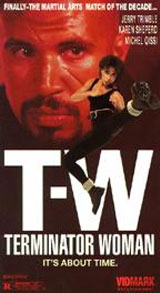 The two cops are played by Jerry Trimble (blond, square-jawed quarterback looking kickboxer-turned-actor) and Karen Sheperd (Jeff Wincott’s little asskicker of a partner in MISSION OF JUSTICE). Sheperd gets kidnapped by Qissi’s men early in the movie, but quickly escapes and spends most of the running time travelling back to where the plot is located. Trimble spends his time trying to get her released while Qissi keeps threatening to kill her. I was never sure if either of them knew she escaped a long time ago.

So the plot doesn’t make much sense, and by halfway through the movie I couldn’t remember why they even came to Africa in the first place. And the whole feel is cheesy and low rent. But it has tons of martial arts and lots of goofy touches that made me laugh:

Sheperd is in the Blackbelt Hall of Fame and was the first woman to win the title of Grand Champion at the U.S. Open Karate Championship, so she kicks ass (and balls) throughout the movie. She’s got short arms and legs, not alot of reach, but gets a guy close enough to do damage by asking for a leg massage. I’m not saying she’s ugly, but she’s not exactly the standard Hollywood beauty, so it’s kind of funny and charming how confident she is in her sexuality. And more than one guy in the movie lusts after her (Trimble being one of them).

Is she the Terminator Woman? Or is it her dress-alike? Or is it the aristocratic attempted-seductress villainess who steals the gold? I don’t know. I guess it must be Sheperd. She probaly terminates more people than the other two. But I don’t know.

Jerry Trimble Karen Sheperd Michel Qissi
This entry was posted on Wednesday, June 10th, 2009 at 3:29 pm and is filed under Action, Martial Arts, Reviews. You can follow any responses to this entry through the RSS 2.0 feed. You can skip to the end and leave a response. Pinging is currently not allowed.