The Toxic Avenger Part III: The Last Temptation of Toxie 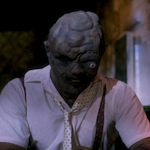 I did not like this one as much, so I didn’t watch it as many times, and all I remembered was thinking it was funny that he gets to fight and kill the Devil. Many of our great franchises such as ROCKY and THE FAST AND THE FURIOUS have not yet been able to face off with Satan. Toxie already got to do it in part III. Good for him. 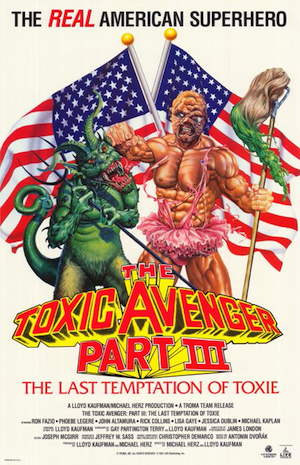 I don’t think I knew any behind-the-scenes information on the movie back then, and I didn’t read up on it before the rewatch, but it’s immediately apparent that it was shot at the same time as Part II. So I spent much of it trying to discern whether the two movies were shot back-to-back in the tradition of BACK TO THE FUTURE 2 and 3 and setting the stage for THE MATRIX RELOADED and THE MATRIX REVOLUTIONS, or if they shot so much footage for part II that they decided to make two movies out of it. The answer turns out to be the latter – that’s why so much of the story is explained in voiceover for both movies. But before I realized that I thought it was a brilliant low budget filmmaking approach and an explanation for the impressive leap in production value between I and II. They could justify bringing together dozens of costumed characters in the Apocalypse Inc. board meeting, or making elaborate sets of Toxie’s house (both exterior and interior), or filling up a church with a bunch of extras, because in all cases they were shooting scenes for two different movies. It would’ve been a smart strategy if they did it on purpose.

In Part II we learned that the citizens of Tromaville love “watching excellent movies,” and in this one we learn that they rent some of them at Tromaville Video, a small-but-not-tiny indie joint run by orthodox Jews and featuring many Troma posters and even a standee for the movie THE TOXIC AVENGER. (Meta!) This is a pretty good location for a good old fashioned Tromaville hostage event in the tradition of part I’s Mexican restaurant siege because Kaufman is able to get in some heavy-handed pro-indie, anti-corporate preaching: the thugs work for Apocalypse Inc. who I guess distribute mainstream movies now and they’re here to make some changes.

“There’s too much variety in this store. Now that this is a company town you’re all gonna rent company tapes!”

“That’s right! From now on only the top 20 video tapes will be available in this store.”

“Well, there’s plenty of variety here,” explains one of the goons. “MGM, Columbia, and Paramount!” 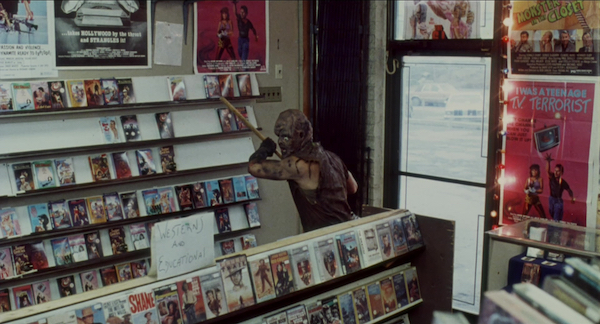 Luckily the real Toxic Avenger shows up and plays the very realistic trick of hiding by standing still in front of his standee. Though part II had some pretty over-the-top violence, this one gets off to an enthusiastic start with Toxie ripping out a guy’s intestines, using them as a jump rope, then strangling the guy with them. Not a good way to go. He also wraps a guy in the tape from a TOXIC AVENGER video cassette and destroys a guy’s arm by feeding it into a VCR. Improbable, but I appreciate the dedication to the video store theme so I’m not gonna be all Neil Degrasse Tyson about it.

It turns out Toxie’s appearance in the video store is him returning to super hero-dom after an absence. But not after a between-movies retirement as in THE DARK KNIGHT RISES – he now tells us the story of how he sold out to Apocalypse Inc. and was corrupted. It turns out after stopping the Dark Rider and creating peace in Tromaville again he just got bored from not having crime to fight and became depressed. Also, a groundbreaking new surgery could allow Claire to see again – it’s been tested on cave bats, they say, and 50% of them lived! – so he accepts a job with Apocalypse Inc. in order to pay for it.

Luckily when Claire sees his hideously deformed visage of super human size and strength she thinks he’s more handsome than ever. I like in the scene where she’s seeing all the things in their house for the first time when she picks up a box of Tide and says, “It’s so beautiful!”

“Thats Tide,” explains Toxie warmly. “It’s a detergent.” I know this wasn’t the intent but it actually did make me step back and think, “Yeah, that actually is a pretty great logo design.” 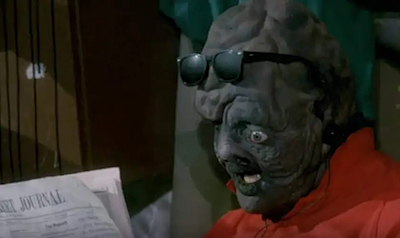 As Toxie explains in narration, though, “The plot was thickening, and I was to be the cornstarch.” Working that corporate job inevitably transforms him into a yuppie asshole, which we know because he wears an alligator polo, reads the Wall Street Journal and has copies of Bright Lights, Big City and Art of the Deal on his desk. (Young people may not know that Donald Trump was already a universal symbol for repulsive douchebaggery decades before he was president.)

Now that I think about it, Part II had its parallel to Kaufman’s pal John Avildsen’s THE KARATE KID PART II in that it brought its hero to Japan, and this one is kind of like ROCKY III (sequelizing Avildsen, though directed by Sylvester Stallone) because its formerly hardscrabble hero gets too successful and full of himself and loses touch with his working class roots.

Toxie finally comes to his senses after seeing some little kids vandalizing a poster of him and realizing it’s because he’s a total sellout piece of garbage. But when he tries to quit his job the Apocalypse Inc. chairman reveals himself as the Devil, and explains that when Toxie signed his employment contract (in his own blood – whoops!) he actually sold his soul. In order to get it back he has to defeat the devil in a game, which the Devil chooses to be in the form of a popular arcade game (established in an earlier scene) called 5 Levels of Doom. Toxie’s good at it so he thinks he might have a chance. 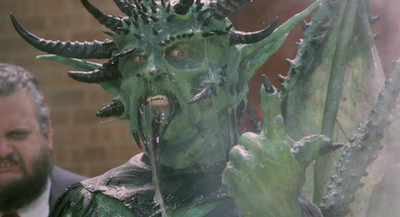 The depiction of this video game and its manifestation in the real world are clunky, but what is pretty well executed is this Troma version of the Devil. First of all, I like that he’s green. We have always seen Satan as a red guy, that’s kinda the main trademark, so I admire the audacity to change that. It’s like giving Santa Claus a blue hat. Second, I like that the Chairman’s human form has to undergo a ridiculously long, slimy and disgusting transformation into his demon form. Several years later it would’ve just been a quick, shitty morph. They did it at the right time.

During the battle, the Chairman’s right hand woman Mona Malfaire offers people money to kill Toxie – money that she explains comes out of the budget of the film. This type of meta-ness reminds me of the Muppet movies, though in most other ways these movies do not remind me of the Muppet movies. For example nobody ever buries Kermit up to his neck and tries to mow his head.

I suppose the subtitle THE LAST TEMPTATION OF TOXIE kind of suggests that Toxie is a Jesus figure. That’s not very accurate. But I suppose you could argue that it’s an illustration of profound forgiveness when the Devil is on fire so Toxie pisses on him.

I like that Toxie calls upon what he learned from the Sumos in part II for this fight. But the best tie-in to his adventure overseas adventure is when he decapitates the Devil and throws his head so far that it lands in Tokyo, interrupting another interview by that reporter who interviewed Go Nagai and had the naked lady fall into his lap and stuff.

Before his untimely death and cameo on Japanese television, one of the Devil’s big tricks is to transform Toxie back into skinny dork Melvin Junko, now played by Michael J. Kaplan (no other credits). In Kaufman’s book he says that original actor Mark Torgl was willing to appear in the sequel for a little bit more money, and he admits it was stupid not to give it to him. But also it would be kind of out of character for this series to not recast him. The only reason cast members from part II are still in III is because it’s left over footage.

Though we see so many of the same locations and characters (for example, the old couple from the taxi in part II are frequent background characters in III), the lack of Tokyo scenes (other than that one joke I mentioned) does make this feel like a very separate movie. But also a not as good one. Up to this point, THE LAST TEMPTATION OF TOXIE is easily my least favorite of the TOXIC AVENGER series. It feels overlong and random and though it’s hard to imagine much of this plot being crammed into Part II it makes a whole lot of sense that this was pieced together from its scraps. Still, there are some laughs and amusing moments (Toxie wearing a tie and suspenders is funny – he kinda looks like John C. McGinley), lots of gross gore and creature effects, a fire stunt in Toxie makeup, a school bus going over a cliff, plenty more weirdo henchmen, and for those of us who appreciate seeing Michael Jai White standing around as a background extra with a bunch of other big guys in suits, female bodybuilders and animal-human-hybrids and stuff, there’s tons of that. He doesn’t get to do much but he is in it a whole bunch. 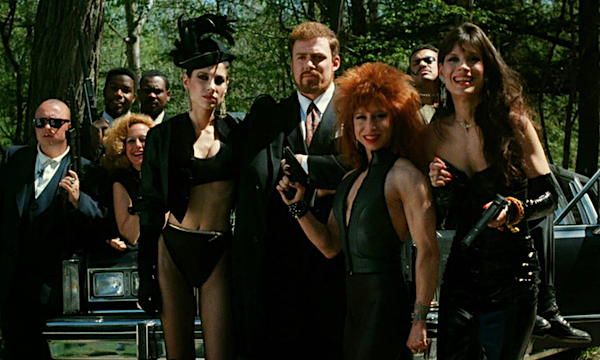 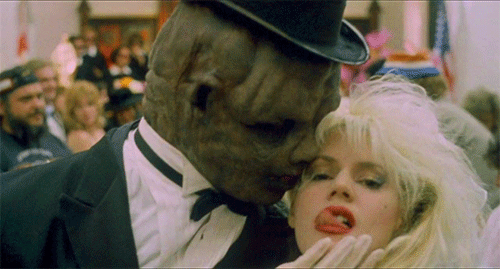 It’s too bad, this came out before the huge success of romance movies like PRETTY WOMAN, GHOST and THE BODYGUARD in the early ’90s. I think it was just a little bit before its time, otherwise Toxie would’ve become a major leading man just like Gere, Swayze and Costner did by shamelessly riding his coattails and ripping off everything he ever did like a bunch of punks. Note for example that immediately after seeing THE TOXIC AVENGER PART II Gere went to Japan and made RHAPSODY IN AUGUST (1991). Fortunately, Toxie was able to take that time to pursue other opportunities…

Lloyd Kaufman Michael Jai White Phoebe Legere Ron Fazio Troma video stores
This entry was posted on Wednesday, March 2nd, 2022 at 3:16 pm and is filed under Comedy/Laffs, Comic strips/Super heroes, Monster, Reviews. You can follow any responses to this entry through the RSS 2.0 feed. You can skip to the end and leave a response. Pinging is currently not allowed.

3 Responses to “The Toxic Avenger Part III: The Last Temptation of Toxie”