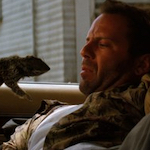 This Joel Silver production is a collaboration/clash between director Tony Scott (coming off of DAYS OF THUNDER) and screenwriter Shane Black (after being replaced on LETHAL WEAPON 2). Those guys making a Bruce Willis movie is about as all-star action as it got in 1991, and had Bruce and Silver known how the release of HUDSON HAWK was gonna go earlier in that year they would’ve been even more eager to sow they could still blow people through the back walls of theaters. END_OF_DOCUMENT_TOKEN_TO_BE_REPLACED 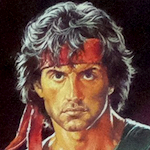 END_OF_DOCUMENT_TOKEN_TO_BE_REPLACED

ARMAGEDDON is Michael Bay’s third movie, but in some sense it’s the one where he revealed his true face to the world. There were plenty of examples of his style and character in BAD BOYS and THE ROCK, but it was ARMAGEDDON that first presented the full breadth of his trademarks: awesome awesome macho bros, pretty pretty sunsets, government employees portrayed as insufferable weiners even though they’re in the right, spinning cameras, haphazard editing all over the fucking place, chaotic mish-mashes of explosions and sparks and machinery and debris and smoke and crap, beautiful shots of people in various locations around the world, weirdly hateful characters presented as cutesy comic relief, an army of highly qualified writers seemingly locked in a cage and forced to duct tape a bunch of dumb ideas into the most unwieldy structure they can come up with that has a running time at least 30 minutes longer than the story has earned, and of course an ensemble of talented actors improvising jokes with no regard for any sort of desired rhythm or tone of storytelling. END_OF_DOCUMENT_TOKEN_TO_BE_REPLACED 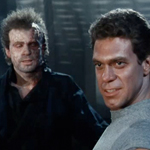 Treat Williams (THE SUBSTITUTE 2-4) and Joe Piscopo (Saturday Night Live cast, 1980-1984) play two 1980s Movie Cops. Treat is supposed to be the straight laced one, so he wears a suit. Piscopo is the wildman who wears a leather jacket and hits on every woman who appears on camera, because that’s always funny (see also: Jay Leno in COLLISION COURSE). This was after SNL when he got really into bodybuilding, so he also shows off his muscles alot. He’s kind of a cross between a wisecracking Bruce Willis type of character and a crazy Mel Gibson one.
END_OF_DOCUMENT_TOKEN_TO_BE_REPLACED

Well today I saw Dolph’s version and I’m here to report that it’s okay. I liked Thomas’s version the best but this one definitely has its moments. Like the 2004 one, this is definitely more in the action movie/vigilante style than some kind of Batman or Superman deal. The main comic book element is that Punisher lives in the sewers and has tunnels to bring him everywhere. Also he has a wacky sidekick who is some kind of homeless guy who always claims to be a theater actor, and who always rhymes. END_OF_DOCUMENT_TOKEN_TO_BE_REPLACED