For the cons it’s a good deal too. They get to go outside. If it’s true they like killing, here’s their chance for more. They get to postpone their executions, or kill some time before their executions. And if they do a good job and survive they might get pardoned, maybe, if fuckin Ernest Borgnine sees it in his heart. If they die in the line of duty, well, maybe they’d rather die that way than on a rope. 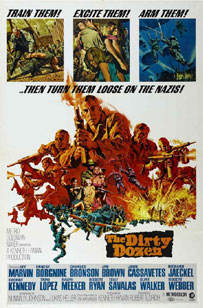 Their major is the hated-by-the-brass Reisman (Lee G.D. Marvin). He has to train a crew of fuckups including Jim Brown (not fond of whites), John Cassavetes (adverse to authority), Telly Savalas (rapist who thinks he works for God), Donald Sutherland (young), Trini Lopez (on guitar) and Charles motherfuckin Bronson. If some of them gotta be murderers in order to bring a team like that together then, well, break a few eggs I guess. That’s a good lineup.

There are alot of sections to this movie: first he goes in and talks to them in their cells, convinces them to join. Then he starts training them, and has to get them to form bonds and work together as a unit, which isn’t easy. Then they form a rivalry with another squad and have to humiliate them in war games or their mission will be cancelled and they’ll go back to death row. Then they finally have the mission.

Of course, most of the dozen are sympathetic. Kind of a cheat. Almost all of them had honorable reasons for killing. Only Savalas is really despicable and dangerous. They put him on lookout duty when they have a party with prostitutes, because he can’t be trusted around women. He seems to think of any woman as a whore, who knows what he’s gonna think about an actual whore.

But they’re these scrappy outcasts who disdain authority, discipline and military order. So this is kind of like THE BAD NEWS BEARS as a WWII movie. You laugh as they fuck everything up, then the gruff major/coach who plays by his own rules (PBHOR) slowly whips them into shape. They bond, they have an underdog competition against another team who are so arrogant you want to see them lose bad and run home crying like babies. And the Dozen do beat them, they get to rub it in their faces. And even though the characterization isn’t all that deep you almost feel like you’re on their team too, becoming friends with them.

It’s also kind of like another movie by the same director, Robert Aldrich: THE LONGEST YARD. If you haven’t seen the original pre-Sandler one it’s a real broad comedy where inmates get to play (American) football against the screws. All these movies have an idea that we Americans like to think is very American, but that probaly transcends all cultures: the team of individuals. They’re all rebels who stand alone and PBTOR, but then after they hang around each other long enough they accidentally bond and next thing you know the loners are a team, united in one goal.

They’re also rebels that are part of the system, that’s another way they have their cake and yet also eat their cake. They reject the military and yet are military heroes. The Dirty Dozen are soldiers like Dirty Harry’s a cop.

THE DIRTY DOZEN is a fun movie, it’s not a gloomy war movie, but it also has some parts that were very graphic for the time. I mean, they really massacre those Nazis at the end. It was obviously an influence on Mr. Tarantino’s INGLOURIOUS BASTERDS and a reason why some people might think the Basterds are wimps. They’re all Donald Sutherlands with no Charles Bronsons or Jim Browns. That’s alot to live up to.

I love these types of premises, so I was surprised to learn from the extras that this was inspired by a real thing. It’s based on a book and the author of that book claims it came out of research and stories he heard about an actual group of condemned soldiers sent on a secret mission in WWII. The DVD also talks about some group called “The Filthy 13” who were so dedicated to the art of war that they didn’t have time for grooming, so that’s where he got that idea.

Wouldn’t it be cool if when they were fighting the Nazis the Nazis kept looking like they were gonna puke and saying, “Holy God what is that smell!?” That’s one thing people tend to forget about the Dirty Dozen. They smell like ass.

Anyway I wouldn’t say this is a masterpiece, but I do consider it a classic, and I think if for some reason you haven’t seen it you should add that to your to-do list.

Charles Bronson Ernest Borgnine Jim Brown John Cassavetes Lee Marvin men-on-a-mission Robert Aldrich Telly Savalas WWII
This entry was posted on Thursday, September 10th, 2009 at 1:02 pm and is filed under Action, Reviews, War. You can follow any responses to this entry through the RSS 2.0 feed. You can skip to the end and leave a response. Pinging is currently not allowed.

22 Responses to “The Dirty Dozen”