Like one other serious grown up horror movie that I know of, WOLF opens with Jack Nicholson driving down snowy roads. But it’s night and he’s by himself and he has to stop because he hits a wolf. He experiences that common horror movie experience of “Do I have to put it out of its misery?” before a very effective “oh shit Jack don’t do that!” as he grabs the thing by the paws and tries to drag it out of the street. So anyway, yeah, he gets bit. END_OF_DOCUMENT_TOKEN_TO_BE_REPLACED 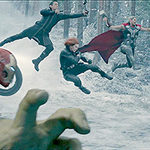 After writer/director Joss Whedon (SPEED)’s masterful job of combining all the different Marvel characters into one supergroup in part 1, he has an even bigger miracle to pull off, and ends up with more mixed results. Because after you’ve managed the trick of combining all these worlds and characters into one coherent movie (which honestly I didn’t believe could be done), the challenge is how do you do it again and make it seem new again and bigger this time but not worse? And the answer is “it’s hard to say.” END_OF_DOCUMENT_TOKEN_TO_BE_REPLACED

SEX, LIES, AND VIDEOTAPE is a very divisive movie among copy editors who argue bitterly about its use of the Oxford comma in the title. The rest of us agree it’s a solid debut for writer-director Steve Soderbergh.

It’s a story with basically four characters. We’ve got Ann (GROUNDHOG DAY‘s Andie MacDowell), a somewhat troubled stay-at-home wife who opens the movie talking to her therapist (okay, I didn’t count him in the four) about her worries, about her husband not touching her, and about her belief that sex is overrated, not that big a deal.

Then we’ve got her husband John (STEP UP REVOLUTION‘s Peter Gallagher), a pure ’80s character because he’s a lawyer who wears suspenders and “just made junior partner” and he’s real proud of himself and a total douche.

And we’ve got Ann’s younger sister Cynthia (Laura San Giacomo), who is much wilder than Ann and sort of rebels against her and also is fucking John.

Lastly we have Graham (CRASH‘s James Spader), an old friend of John’s who he hasn’t seen in nine years but he’s back in town and John is letting him stay at the house briefly while he tries to find an apartment. Graham is the individualistic non-conformist cowboy drifter loner artistic beatnik rebel who sweeps through their square lives and changes everything forever. And he does it merely by being a pervert who can’t get a hard-on and owns a Hi-8 camera. END_OF_DOCUMENT_TOKEN_TO_BE_REPLACED

After the election on Tuesday, which brought us 4 historic gay rights ballot victories, the first openly gay Senator and the most women in the Senate ever, it was a no-brainer to spend Friday night watching Spielberg’s movie about Abraham Lincoln and his people’s fight to eke together a coalition to pass the 13th amendment to the Constitution, ending 400 years of slavery. Also, SKYFALL was sold out.
END_OF_DOCUMENT_TOKEN_TO_BE_REPLACED 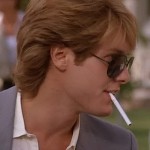 This is the courageous story of a movie producer (James Spader) and his wife (Debora Kara Unger from STANDER and PAYBACK and THE GAME) and all the people they like to fuck from behind (various). The movie opens with Ms. Unger in an a hangar rubbing her nipple against an airplane while some dude licks her ass. And you can imagine where it would go from there (perverted car crashes, etc.). Very predictable, standard stuff. END_OF_DOCUMENT_TOKEN_TO_BE_REPLACED