I don’t know what my problem was, but I didn’t dig on GLADIATOR like everybody else did, and for some reason I was bitter about it and skipped most of the Ridley Scott movies after that. But like the typical SCARFACE-loving American male I couldn’t resist AMERICAN GANGSTER, and that’s when I realized the error of my ways. So predictably my post BAD LIEUTENANT fascination with Nic Cage sent me back to catch up on Mr. Scott’s con men movie.

Cage plays Roy and Sam Rockwell plays Frank, two grifters we first meet in the midst of scamming an old lady by calling up and telling her she won a contest. I must be getting soft in my old age because seeing it open that way made me wonder if this movie was gonna be too unpleasant to watch. We all love a good con job in a movie, but telemarketing scams on the elderly? Usually not as fun. Fortunately it gets more complicated when they show up at her house pretending to be FBI agents after the people who scammed her and take advantage of her hotheaded husband. The more complicated it gets the less moralistic we become as an audience. We would cheer on Ocean’s 11 even if they were stealing from orphans, as long as they had to use a tunnel and dress up in uniforms. Or that’s one theory, anyway. END_OF_DOCUMENT_TOKEN_TO_BE_REPLACED 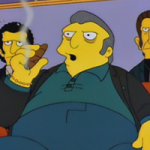 In the opening scenes the acting is kind of stiff and everything is kind of dull and I was thinking of watching something else. But as soon as the story kicks in you see that that is to illustrate that this lady psychologist who is the main character, her life has grown banal and she is in need of adventure. Her everyday job scenes are almost draining they are so dull while the rest of the movie is full of suspense. One of her patients tells her what does she know, she hasn’t experienced anything. And through his gambling problem she goes and decides to thrust herself into some real experiences. She goes to a small bar called “house of games” (get it, that is also the title of the movie, house of games) where she meets a gambler named Joe Montegna. I mean that is the actor’s name anyway. END_OF_DOCUMENT_TOKEN_TO_BE_REPLACED