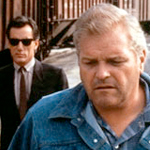 LAPD detective/best-selling true crime author Dennis Meechum (Brian Dennehy, FIRST BLOOD) doesn’t have as hard of a time deciding, because his subject keeps showing up in person and hassling him until he gets started. Back in ’72 he survived the infamous robbery of a police evidence depository (with the thieves wearing Nixon masks four years before POINT BREAK) and turned his experiences into the hit book Inside Job: Anatomy of a Robbery. This guy is a hard worker: he’s still a cop, and also keeps writing books, and also has raised his beloved daughter Holly (Allison Balson, Little House on the Prairie) alone since his wife died of cancer. But he’s burnt out and having trouble writing another one and some guy named Cleve (James Woods, VAMPIRES) has decided to come tell him what to write about. 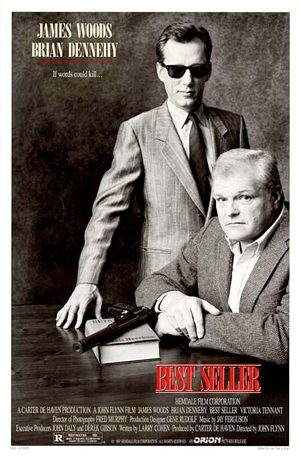 In my opinion this is not a very professional way to pitch a book: he shows up while Meechum is tailing a suspect and starts talking to him. Kinda gets in the way but then shoots the guy for him. Later he claims that he worked as a hitman for the businessman David Madlock (Paul Shenar, SCARFACE, RAW DEAL) of the corporation Kappa International. He digs Meechum’s books and wants him to write one that exposes Madlock while also making Cleve seem sympathetic. It could stop some evil in the world, or save Cleve’s ass, or at least entertain people when they buy the hardcover at the airport bookstore.

This whole thing is weird. The way Cleve appears and disappears, and knows everything about Meechum down to the page number he’s stuck writing on made me assume at first that he was imaginary, that this is one of those stories where an artist’s creation comes to life and interacts with him, like COOL WORLD or MONKEYBONE or THE DARK HALF I suppose you could say. But Cleve is real, and he takes skeptical Meechum around to different people and places to try to corroborate his story. For example he gets an old lady to let them into her house at night by telling her he used to live there. He shows Meechum that he’s familiar with the inside, and shows him where he says he murdered the guy that the old lady confirmed owned it last. Meechum points out that this knowledge doesn’t prove anything, which is technically correct, but I mean… come on.

Meechum uses sick time to be able to take a trip and look into some of this. Good idea, I should do that. But I got a laugh out of the writing montage where he sits briefly at a typewriter and after two dissolves he has a manuscript (minus a “couple of chapters to go” since any hack can see the story is leading toward an exciting ending). 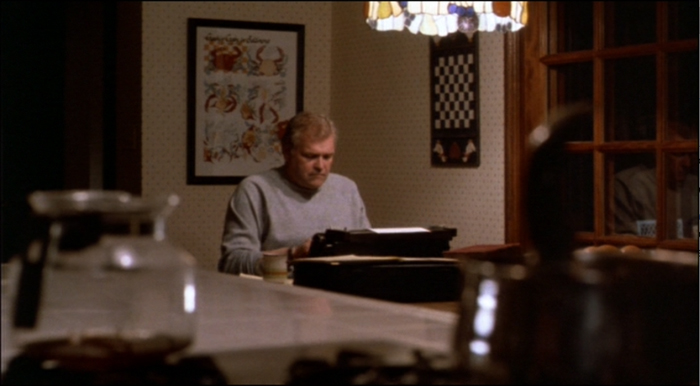 Note: There is never a rewriting montage.

There’s a bit of a battle going on between author and subject. One way Meechum exerts his authorial powers is insisting that they visit Cleve’s childhood home and meet his family. Cleve resists for a while before he gives in but then when they’re there we find out that he told them a week ago that he’d be coming on that specific day. He was in control the whole time.

But Cleve becomes more crazed as he starts to worry about the content of the book. He hasn’t seen it and obviously he’s a control freak so he loses his shit. There’s a disturbing scene where he attacks Meechum’s agent Roberta (Victoria Tennant, THE HANDMAID’S TALE), who got to read the manuscript, demanding to know “Is it an important book!?” He doesn’t want to be part of no fluff, I guess. It seems like he’s gonna rape her and then he slices up dresses from her closet while trying to shame her about whether or not she deserves her success. This hitman is a sicko, you guys. I don’t like him.

This is a very serious movie, but there’s one kinda funny part when a fleeing criminal pulls a gun on a cab driver, who refuses to drive him. 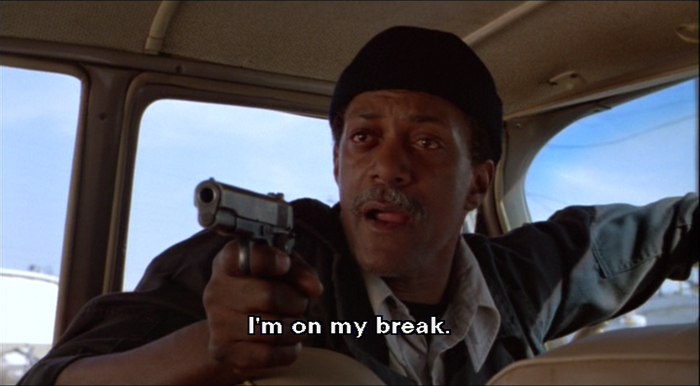 And I suppose there’s a tiny bit of the ol’ ’80s corporate satire built into the backstory, as Cleve basically argues that he was just trying to be a go-getter and impress his boss to move his way up the ladder, and got pushed into being a killer.

There’s also a weird scene where Meechum is confronted by Madlock’s lawyers at police headquarters. Actually one of them is not a lawyer, he’s an enforcer who Meechum catches with a gun and puts in a painful wristlock. Even before that he zeroes in on him for humiliation. He notices the guy has hairplugs and makes several gratuitous comments about it. Perhaps this is showing his writerly powers of observation, combined with a dark side brought out by Cleve. Or perhaps it’s a preview of the type of heroic bullying that will be heavily featured in director John Flynn’s later film OUT FOR JUSTICE.

About an hour in, the film confirms what most of us suspected early on, that (SPOILER) Cleve was one of the masked men that killed cops in that fateful depository robbery. Meechum still wants to finish the book before dealing with him – he admits that he both likes him and plans to arrest him. Which is a conflict of interest in my opinion. But also it’s a good dramatic conflict. You root for Meechum but also it’s fun to see them working together like buds.

At the end of course Meechum has his titleistical publication and it seems he must be a hell of a writer because somehow he made this a gigantic smash hit (28 weeks on the chart as of the end of the movie) despite having the boring ass title Retribution: The Fall of David Madlock and Kappa International and an artless cover that looks like a bottle of generic aspirin. I thought the whole hook of the book was supposed to be that it’s the confessions of a corporate murderer, and they chose not to mention that in the title or cover art. But it didn’t matter! 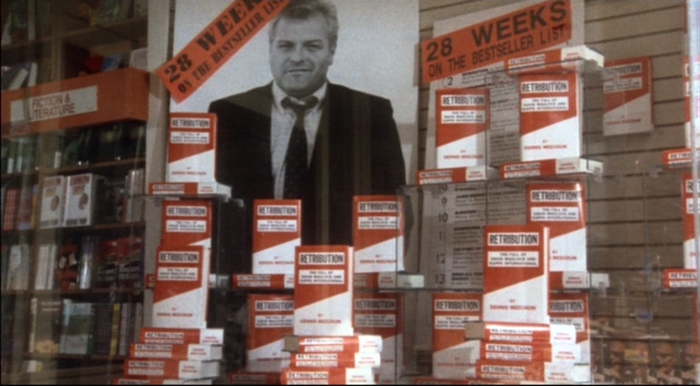 The BEST SELLER script was apparently written some years earlier as HARD COVER by Larry Cohen. It’s definitely recognizable as one of his tight, high concept thrillers, but I’ve read that it was heavily rewritten by director Flynn (THE OUTFIT, ROLLING THUNDER). This is not good enough to top his list, but it’s a decent little warm up for his next two films, LOCK UP and OUT FOR JUSTICE.

Brian Dennehy James Woods John Flynn Larry Cohen Paul Shenar Victoria Tennant
This entry was posted on Monday, May 8th, 2017 at 10:24 am and is filed under Reviews, Thriller. You can follow any responses to this entry through the RSS 2.0 feed. You can skip to the end and leave a response. Pinging is currently not allowed.