I liked AMERICAN YAKUZA so much I figured I better investigate the other two directorial works of Mr. Frank A. Cappello. #2 of 3 is an unpredictable 1995 action movie starring Russell Crowe as an FBI agent. That’s the mystery of Cappello – the guy only directs three movies but manages to nab both Viggo Mortensen and Russell Crowe in leading roles before they became huge. I really like Crowe in this one, playing an obsessed agent and single dad. It’s actually pretty similar to his role in AMERICAN GANGSTER except he accidentally slips into the Australian accent more. 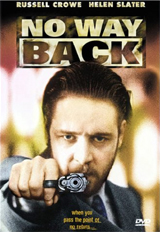 In the NORMAL LIFE comments a while back we discussed the plight of the former 90210 stars trying to have serious careers. Well here’s Ian Ziering as a tatooed, nipple-pierced racist skinhead rich kid roughing up an Asian hooker named Seiko (Kelly Hu of X-MEN 2 and THE TOURNAMENT) while talking to his dad on the phone. What he doesn’t realize is

1. you shouldn’t do that

2. Seiko is undercover for Crowe. What Crowe doesn’t realize is that she has an agenda of her own (blowing Ziering’s dick off, massacring other skinheads, dropping herself out a window).

Now Crowe’s in deep shit with the higher ups, and the dead skinhead’s bigshot dad is out for revenge. Both of them determine that Seiko was working for a local Yakuza (no, not Viggo) and go after him.

One thing I liked about this movie was that the story went off in directions I didn’t expect. So use your judgment about whether or not to read this review. An element that threw me off was when he’s transporting the Yakuza, Yuji (Etsushi Toyokawa), by plane and all the sudden it starts showing the flight attendant (who I didn’t realize was SUPERGIRL Helen Slater) in a scene without Crowe. Wait a minute, this flight attendant is gonna be an important character? Then Yugi manages to get loose and hijack the plane. I didn’t know it was gonna be that kind of party.

It ends up being about the skinhead’s dad kidnapping Crowe’s son, and Crowe having to bring him Yuji for trade. But the other feds are after him and so are the dad’s men, who don’t care too much about the deal so they might just shoot somebody.

There’s a whole fathers and sons motif going on here. Seiko and Yugi kill Ziering because he killed their dad. His dad goes after them for killing his son, and he takes Crowe’s son as a bargaining chip. Meanwhile, there are questions about whether Crowe is a good father or not. The dad and Crowe’s son actually have fun fishing toegether. This guy seems disgusted when he finds out the kid normally has to do puzzles by himself instead of with his dad. In one scene he puts the last piece in and says hey, I finished that puzzle for you. He thinks he’s doing a good thing for the kid, but isn’t he really depriving the kid of the satisfaction of completing the puzzle himself? It’s good that he spends time with his kid (even talking to him on the phone right before rough hooker sex) but also you gotta figure he’s not getting the #1 Dad mug either, his son grew into a murdering skinhead. With nipple rings, if that’s not enough.

AMERICAN YAKUZA seemed like it had a little John Woo/Hong Kong cinema influence, and not just in the obvious double-fisted shootout type of way. This one has more of that – bonding between enemies, moral grey areas, flawed heroes, villains with good sides. I mean, for sure it’s got the feel of a ’90s b-movie. But a good one. I liked AMERICAN YAKUZA a little better, but both are worth checking out.

(technical note: I’m not sure if this was DTV or not. IMDb doesn’t list it as a video premiere, but also doesn’t have any box office info.)

former 90210 stars trying to have serious careers Frank A. Cappello Helen Slater Kelly Hu Russell Crowe
This entry was posted on Friday, January 22nd, 2010 at 2:37 pm and is filed under Action, Reviews. You can follow any responses to this entry through the RSS 2.0 feed. You can leave a response, or trackback from your own site.

9 Responses to “No Way Back”