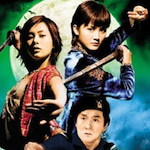 Choi stars as Helen, a heartbroken young woman who, while grieving a breakup, hits it off with a vampire prince named Kazaf (Edison Chen, GEN-X COPS 2: METAL MAYHEM) who’s enjoying a glass of blood in a fancy restaurant. She doesn’t realize what he is, even though she has some knowledge of such matters because her brother Reeve (Ekin Cheng, YOUNG & DANGEROUS) is a vampire hunter. END_OF_DOCUMENT_TOKEN_TO_BE_REPLACED 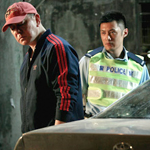 It’s a serious movie, but it’s got a nice tinge of absurdity to it. Its law enforcement protagonists are not cool homicide detectives or badass SWAT dudes, they’re part of an elite squad of, uh, traffic cops. I guess they’re there for their high level driving skills, but their regular job is camping out with the speed gun, pulling people over, wearing dorky windbreakers and reflective vests, the kind of thing most action movie cops only have to do in a funny montage after they get in trouble. Cheung (Shawn Yue, LEGEND OF THE FIST, THE GUILLOTINES) takes the job seriously and is annoyed that his older partner Lo (Anthony Wong, HARD BOILED, GEN-X COPS 2, EXILED, THE MUMMY: TOMB OF THE DRAGON EMPEROR, IP MAN: FINAL FIGHT) seems to not give a fuck. (Having him browse literature about an upcoming retirement seminar is a good spin on the ol’ two-weeks-from-retirement cliche). END_OF_DOCUMENT_TOKEN_TO_BE_REPLACED 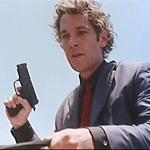 I haven’t seen part 1 (from 1999), but it must be about these two somewhat comical undercover cops Match (Stephen Fung, THE AVENGING FIST, TAI CHI HERO) and Alien (Sam Lee, MAN OF TAI CHI), who are introduced driving a Ferrari that Match bought with money from founding a successful websight. They are supposed to be very modern and computer savvy, so Alien keeps talking about ICQ. END_OF_DOCUMENT_TOKEN_TO_BE_REPLACED 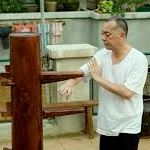 This is from Herman Yau, the director of the least known but still good Ip Man picture, LEGEND IS BORN: IP MAN, and once again with an appearance by Ip Man’s actual son Ip Chun (a consultant on all of the Ip Man movies except THE GRANDMASTER). But this time the attraction is seeing Anthony Wong (HARD BOILED, HEROIC TRIO, INFERNAL AFFAIRS, EXILED, VENGEANCE, everything else) take over the Ip Man role and play him as an old man. In THE GRANDMASTER it ends up when the good old days are over and everybody’s opening kung fu schools left and right. That’s when this is, over a period of years but focusing on the early 60s, around the time Ip Man was giving Wing Chun lessons on the roof of a building. END_OF_DOCUMENT_TOKEN_TO_BE_REPLACED

LEGEND OF THE FIST: THE RETURN OF CHEN ZHEN is the latest in Hong Kong’s prestigious line of FIST movies. If you’re not familiar with the saga it’s very simple: Chen Zhen is a vengeful kung fu master who was played by Bruce Lee in FIST OF FURY (1976), Jet Li in FIST OF LEGEND (1994), Donnie Yen in the FIST OF LEGEND tv series (1995), and Donnie Yen again in this movie based on his tv series adapted from Bruce Lee’s movie because of the popularity of Jet Li’s movie. The fictional Chen Zhen is supposed to be a student of the historical Huo Yuanjia, who was played by Jet Li in FEARLESS (2006). So keep in mind while watching that movie that Jet Li is playing teacher to himself and Bruce Lee and Donnie Yen, who of course played teacher to Bruce Lee in IP MAN 1-2. The Bruce Lee movie FISTS OF FURY is not related to these movies, that’s just another name for THE BIG BOSS. The Chen Zhen movies are only singular FIST and not plural FISTS. Also Chen Zhen is not related to the historical figure from the Han Dynasty, he is instead portrayed as living in the Republican era  before the Second Sino-Japanese War although Huo Yuanjia lived during the late Qing Dynasty. So you see there is nothing to be confused about here. END_OF_DOCUMENT_TOKEN_TO_BE_REPLACED

After VENGEANCE heroically bloodshedded me in the face it was obviously time to check out some of these Johnnie To movies that I’ve been ignoring even though everybody and their blood brother has been recommending them to me over the years. It’s nice to see that while Hong Kong action cinema has lost the worldwide attention it had in the ’90s there’s still been some people keeping it alive. Mr. To definitely has a modern take on the types of emotions and style we love from that era. So here’s another one of his more recent ones, 2006’s EXILED.
END_OF_DOCUMENT_TOKEN_TO_BE_REPLACED

In the opening scene a family is gunned down by three hitmen. Only the mother survives, and just barely. Her father, just known as Costello (Johnny Hallyday), comes to the hospital, vows to avenge her and gets minor details about the attackers by having her point at words in a newspaper. END_OF_DOCUMENT_TOKEN_TO_BE_REPLACED

The Mummy: Tomb of the Dragon Emperor

PROLOGUE: Long ago, a brave warrior (Jet Li) and a graceful dancer turned actress (Michelle Yeoh) did the movie TAI CHI MASTER together. Then both went to Hollywood and did Lethal Weapon and James Bond and shit. But they had not forgotten each other. They were gonna star in CROUCHING TIGER, HIDDEN DRAGON together. But Jet backed out for the incredibly classy reason that he had promised his wife to take the year off from movies and be with her while she was pregnant. Years later, they had another chance to do a movie together in Ronny Yu’s FEARLESS – but Michelle’s scenes got cut out of the theatrical version. So it was this last summer, 15 years later, that the two were finally reunited on the big screen. BUT IT WAS IN THE FUCKING MUMMY 3! How’s that for a Tales From the Crypt type twist ending?

Okay, I should get a couple disclaimers out of the way. First of all, mummies are not one of my favorite monsters. Off the top of my head the only mummy movie I can think of that I like is BUBBA HO-TEP, but that didn’t really need to be a mummy to be good. It just needed to be a slow moving monster so an elderly Elvis could be a fair match for it. If it was about a giant space slug or mutant sloth it could also be good if it had the same characterization of a sad, lonely Elvis Presley. The Universal MUMMY with Boris Karloff is a great monster at the beginning, then he disappears and it’s just Karloff in a fez for the rest of the movie. It’s no DRACULA, I’ll tell you that. And as you can see above I didn’t think the Hammer version was that great either. END_OF_DOCUMENT_TOKEN_TO_BE_REPLACED 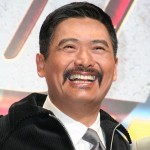 I mean don’t get me wrong I like the van dammes and what not but this is on a whole other plane flying way up in the sky. It will forever change what you expect from an action picture in my opinion although I only saw it this afternoon so what the hell do I know. But it is to shootout movies what Godfather is to mob movies or Jaws is to shark movies. Don’t take this the wrong way but it is such a leap ahead it is like die hard times ten. It is WAY, and I mean WAY more violent than anything you will see in the US of A but at the same time the characters and story plot are far more developed. END_OF_DOCUMENT_TOKEN_TO_BE_REPLACED