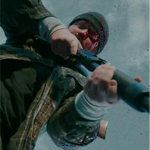 The majority of the movie takes place 2 years later according to the text on screen, “almost 2 years” later according to Seth. He’s a mess now, his boss at the hardware store thinking he’s on coke, Mark’s girlfriend Jen (Vanessa Leigh, veteran of around 20 obscure indie movies just in the few years before this came out) not wanting to talk to him when he shows up at her work warning that he thinks something is happening again. END_OF_DOCUMENT_TOKEN_TO_BE_REPLACED