Now that I think about it there’s not as much gore or especially sex as you would normally get in a ‘90s horror sequel, but like SOMETIMES THEY COME BACK earlier in the summer it has enough severed limbs to throw you off the TV movie scent. More importantly it has a real Larry Cohen sort of indie horror feel to the type of actors and characters that show up, giving it a personality that’s at least in the spirit of the original.

I definitely wouldn’t say it’s on par with the first one, but surprisingly it’s made by people who got one of the main things that was cool about it: an interesting character actor playing an off beat leading man. This time it’s Joseph Bologna (COPS AND ROBBERS, BLAME IT ON RIO) as homicide detective David Hodges. Bologna in this kinda reminded me of Leo Rossi in RELENTLESS: a lead who’s fun to watch because he seems like he’d usually be a supporting character. And there are lots of little goofy touches that made me smile. When he wakes up in the morning the language of cinema tells us he’s a cop: he has a badge on his bedside table. And handcuffs. And a gun. And a coffee mug with a cartoon cop on it. Everything but a book called So, You Are a Police Officer. 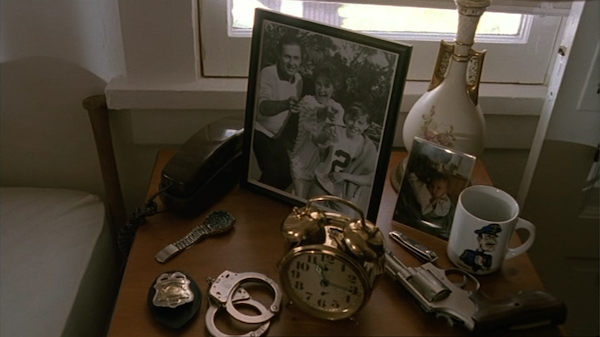 I guess we also get to see that he’s a family man and that he keeps his nails trimmed.

It’s his birthday, but he works opposite schedules from his wife Christine (Dee Wallace in her followup to ROCK-A-DOODLE) and son J.J. (Trevor Eyster, PRAYER OF THE ROLLERBOYS, young Alex P. Keaton on an episode of Family Ties), so they leave him a birthday message on a VHS tape. In a dumb/cute bit of meaningless irony, the phrase “Later alligator” is used.

The neighborhood is predominantly Latinx, Hodges is on a first name basis with many of the residents, and they’ve even given him the Spanish 101 nickname “Solo Lobo,” which will be chanted by a crowd by the end. Although I did wonder, I noticed no evidence they were trying to portray him as Latino himself. But he speaks Spanish and is the only cop willing to intervene and try to help some Spanish speakers being ignored and insulted for trying to report their missing relatives. We know they were eaten while night fishing in a cove where local rich asshole Vincent Brown (Steve Railsback, THE STUNT MAN, TURKEY SHOOT, LIFEFORCE, and THE ASSASSIN directed by Hess) personally oversaw the dumping of toxic chemicals that caused another gator (the baby from the end of the first movie?) to grow huge and hungry.

Brown is a double whammy of a rich guy villain because he’s both polluting the community through Future Chemicals and trying to force them to sell him their property through Vincent Brown Realty. He wants to build a resort. This guy is so untouchable he’s able to kill the police chief (Brock Peters, CARMEN JONES, SLAUGHTER’S BIG RIP-OFF). He holds a charity wrestling match featuring Professor Toru Tanaka (THE RUNNING MAN) as “Tokyo Joe” and Alexi Smirnoff (BODY SLAM) as “The Mad Russian,” and he roots for a wrestler named Ramon (Chavo Guerrero Sr., later in STREETS OF RAGE), so it’s kind of like he’s rooting for the alligator. I don’t endorse this at all, but I’m pretty sure his delight for staged violence is supposed to reflect poorly on his morals and/or class. “Who said theater is dead?” he asks. 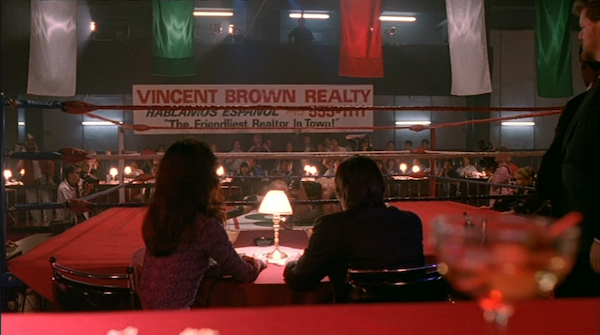 During the match, Brown aggressively hits on the mayor’s adult daughter Sheri (Holly Gagnier, GIRLS JUST WANT TO HAVE FUN, Baywatch). She attended against the wishes of her dad (Bill Daily, I Dream of Jeannie) specifically to tell Vincent Brown to stick it.

Sheri sort of becomes the co-lead, but don’t worry, her sexual tension is with a rookie cop (Woody Brown, KILLER PARTY), and Hodges ends up letting his wife come along on the mission. Did I mention she’s a scientist and he calls her throughout his shift to say hi and check on those test results that prove the severed leg they found was bit by an alligator?

A homeless man played by Carmen Filpi (ESCAPE FROM NEW YORK, 10 TO MIDNIGHT, RUNAWAY TRAIN, HALLOWEEN 4) manages to survive a gator attack. In my opinion he’s playing his “Jimmy Crack Corn” singing character from PEE-WEE’S BIG ADVENTURE even though he’s called “Wino Henry” now instead of “Hobo Jack.” I like the little conversation he has with Hodges before he’s taken away on a stretcher.

“Otis was my friend, David. He didn’t deserve to be a toothpick.”

“Otis was a good guy,” Hodges says. “You know where good guys go?”

Henry doesn’t say anything, just points up. This is a cop who cares about poor people and immigrants, and a movie that respects them enough to treat their deaths seriously, despite the silly circumstances.

Like in the original there’s a cocky alligator hunter flown in. This time he’s a Cajun guy called Hawkins (Richard Lynch, who also had TRANCERS II, PUPPET MASTER III and THE LAST HERO that year). He brings along a whole team, including his brother Billy Boy (Kane Hodder, who was in the first one wearing the alligator costume, according to IMDb). It’s funny to watch them laugh off Hodges’ warnings (“Look, I understand that you’re professionals, but this is not a professional alligator!”) and then turn and run in abject terror the very second they see the thing. The production reportedly built a 29 foot long animatronic gator, and there’s a giant head shown a bunch, but alot of times it’s just a huge tail slapping people around and knocking them against walls.

A difference from the first one is that the hunter survives the encounter (but loses his entire team). He’s humbled by it and works with our heroes to finish the job.

The subtitle had me thinking it would be some weird monster gator, but it turns out to be the same mutation as last time. He’s just big. No PIRANHA TWO/GREMLINS 2/TREMORS 2 style progression in creature abilities.

Since this is a Summer of ’91 film let’s spend a minute to consider the female lead. Sheri is definitely not a Thelma, a Louise or a Sarah Connor. She shows her disgust for being sleazed on, but no more than that. She’s heroic because she’s privileged and could just stay out of it but she butts in to try to protect her father and get him to do the right thing for the community. Unlike Marissa in the first movie she does not sleep with or have any kind of a thing for the older male hero. That may be a function of being a TV movie more than values and tropes evolving in the decade since the first film, but it works well for the story. It’s cool to see a hero who is happily married and able to work with his wife as well as female friend/colleagues. It’s weird when normal things like that seem novel in movies.

Wallace as Christine deserves more screen time, but she gets to be funny and heroic at least, and is always entertaining when she shows up.

Here’s a summer of ’91 connection: Julian Reyes, who played Alvarez, one of the giggling prick cops in POINT BREAK, appears as a local gang leader who has tension with Hodges but mostly hates Brown and what he’s trying to do, so he’s a good guy.

According to the Fangoria article, Hess had another idea about “this Chinese guy who breeds alligators” and they mutate because of a nuclear power plant and get loose in a prison, “but they felt that my idea was too complicated, since it involved so many alligators.” That would’ve been more different from the first film, arguably closer to a T2 style escalation, while this is kind of a rehash. But I think it has enough of the world and tone of the original to feel connected, and not just another alligator movie.

The article also says that Hess was considered for LEATHERFACE: THE TEXAS CHAINSAW MASSACRE III, but he was really into Jodorowsky’s SANTA SANGRE at the time, and claims that whatever he pitched to New Line made them say “Jon Hess is just too violent. He wants to make this incredibly gross, violent movie.” He followed this with the CBS TV movie NOT OF THIS WORLD, and then the cop movie EXCESSIVE FORCE (1993), starring and written by Thomas Ian “Terry Silver” Griffith. I’m not familiar with any of his subsequent films (MARS, INFIDELITY/HARD FALL, LEGION, CRASH AND BYRNES). His most unexpected credit is as co-producer of AMERICAN HISTORY X.

ALLIGATOR II has only been released on VHS in the U.S., but I was able to rent a code 2 import DVD featuring both films.

5 Responses to “Alligator II: The Mutation”