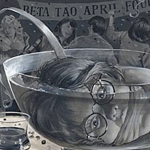 Maybe that’s all they wanted, but this world also has alot of built-in conflict in the rivalries between fraternities, or (as in this case) the new people going through hazing to try to get accepted. It’s a pretty good microcosm of the way alot of us remember the age of yuppies and Ronald Reagan: you got these good looking assholes in charge, coming from rich families, re-enacting weird fetishistic rituals of cruelty while excluding people different from themselves from their superficial, hedonistic lifestyle. Usually we’re supposed to identify with an underdog or outsider who’s trying to be accepted into this world, not opposing it. Here it’s two good looking girls (Joanna Johnson and Elaine Wilkes as Jennifer and Phoebe) and their quirky bespectacled friend Vivia (Sherry Willis-Burch, whose only other movie was FINAL EXAM) who the sorority sisters clearly don’t like. So there’s that tension that they might turn against her to get in, or after they get in.

I wonder if they intentionally gave Johnson a Cybill Shepherd haircut? I know it’s not just me that thinks they look alike, check out the IMDb trivia. Johnson has a real strong presence and has the classic Final Girl quality of being more observant than the others, noticing the danger before anyone else. At the same time she seems to be experiencing some things that are not part of the prank she’s in on. Is she going crazy? Is she being double-pranked? Does she have her own sub-prank in the works?

By the way, the girls in this movie are much better at pranks than the guys. They plan an elaborate performance using motorized haunted doors and furniture, leading up to a guillotine and a realistic severed Vivia head. But even at a sorority party the males dominate and the big decapitation finale never happens because the boys interrupt with a dumb old retractable knife and fake blood routine.

Worse than that, though, in my opinion the first prank that takes place is technically closer to a sex crime than a gag. The boys throw a jar of bees in the backyard where the girls are hot tubbing, so they run out of the tub and the boys have locked them out so they can film them panicking naked. They’re standing by in a big pack whooing and howling and everything but jerking off. You can tell the whole thing is supposed to be real wacky because the uptight sorority mother somehow falls all the way into the tub, and a horny dude falls off of the roof of a van. Falling is funny. Later they show the film in place of an instructional one at a meeting and the secretary lady can’t stop giggling. Oh, you rascals. The ol’ secret filming naked women bee attack trick. Boys will be boys.

The girls are also really cruel in this, putting our protagonistical pledges through the type of hazing usually reserved for guys in these movies. They get spanked alot and have to get raw eggs dumped in their mouths and shit like that. Luckily they don’t have dicks to tie bricks to so they avoid that one. 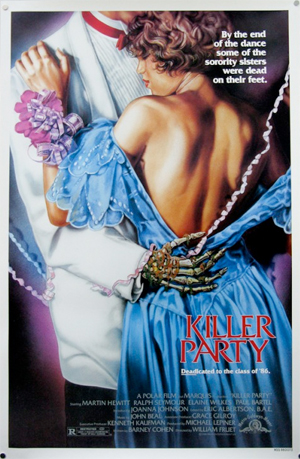 Anyway, somebody is going around committing murders, we can assume those scenes aren’t pranks because nobody else sees them, nobody notices these people are missing. It’s just old people like the professor played by Paul Bartel. Who cares?

But who’s doing it though? Is it the stalkery nerd kid Martin (Ralph Seymour of JUST BEFORE DAWN and EMPIRE OF THE SUN), whose worn out Adidas we keep seeing standing ominously nearby, watching? Is it someone connected to the prank-gone-awry death that happened in the frat house where the Beta Taus are illegally holding their April Fool’s masquerade party? Is it a ghost? Is it her? It’s a movie that’s not afraid to mix it up, so it keeps you guessing.

It has a sense of playfulness that really makes it stand out. We’ve seen a whole lot of movies that start out with a crazy scene that turns out to be a horror movie being filmed or being watched on TV or some other type of movie-within-the-movie. This is the first I’ve seen with a horror-movie-within-a-heavy-metal-video-within-the-movie. The opening mortuary horror is being watched at a drive-in where spooky things happen and then a band called White Sister starts playing and it’s 9 minutes into the movie before we meet our protagonists watching this all on TV. (Nice “Thriller” ripoff, White Sister.)

That’s an example of how the movie keeps seeming like it’s one thing and then turning out to be another. You’re already trying to distinguish between fake-murder-pranks and real murders, trying to decode all the possible motives and red herrings, then you start getting hints that it could even be supernatural? It keeps switching it up. It’s not until near the end that we see a masked killer – and it’s somebody in an antique diving suit! That’s a hell of a slasher getup.

(The Slasher Search 2013 logo comes from a very misleading poster depiction of the diving suit.)

I mean, listen to “The Best Times,” the pop theme song that autoplays on this fan page if you don’t believe me that this is a little different from other slashers. It’s a clever mix of many types of movies, so I never knew where it was going. (HERE IS BIG SPOILER) I didn’t think it would turn into a possession movie. Johnson does a fantastic job of going evil dead, perched like an animal on the peak of the roof, drool pouring out of her mouth like syrup.

Writer Barney Cohen wrote FRIDAY THE 13TH: THE FINAL CHAPTER. Director William Fruet is the Canadian that did DEATH WEEKEND and BLUE MONKEY.

Until pretty recently KILLER PARTY was one of the VHS holdovers, but thankfully it’s now available on DVD from Warner Archive.

April Fool's Day Canadian Elaine Wlikes Joanna Johnson Ralph Seymour Sherry Willis-Burch Slasher Search slashers William Fruet
This entry was posted on Tuesday, October 8th, 2013 at 12:01 pm and is filed under Horror, Reviews. You can follow any responses to this entry through the RSS 2.0 feed. You can skip to the end and leave a response. Pinging is currently not allowed.