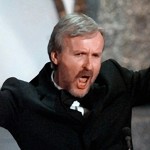 It’s always mildly amusing to remind everybody that an oscar winning director started out making a b-movie sequel about flying killer fish, but honestly I’m just being a smartass, I actually think that’s cool. It’s something to be proud of, especially if you can later look back and see how that movie connects to their later ones, which is the case here. I saw this one a long time ago and I don’t remember thinking it was very interesting, but I changed my mind this time. In my opinion it’s actually kind of good. Seriously. No joke. The original PIRANHA is a little better because the premise lends itself better to the kind of dry humor that Joe Dante and John Sayles were going for than for actual drama. Early on there’s some painfully broad comedy and cheesy ’80s moments. There’s a stereotypical Jewish lady picking up a POLICE ACADEMY style nerd, there’s a “cool” ’80s girl rocking out on headphones, the precursor to Sarah Connor’s roommate in THE TERMINATOR. But it quickly settles in to a more serious James Camerony type of movie. Except with no money and it’s about flying super-piranhas.

Of course to guys like me James Cameron is important because of ALIENS and the TERMINATOR movies. And then it seemed like we lost him forever when he directed TITANIC and spent the next ten years pissing away his talents analyzing submarines and shipwrecks. But then I go back and watch this again and finally make the connection that he’s been obsessed with that deep sea shit since the first scene of his first movie. The best way to explain the marriage between James Cameron and PIRANHA is to say that P2 starts out with scuba divers going into a shipwreck to screw. Any director could figure out a way for a couple to screw in the woods or in a car or an evil hotel or an abandoned building or some haunted bushes, but only an elite few director/scuba divers would have an underwater sex/death scene. And James Cameron is the king of that world.

Not only is this an excellent opening, but the score sounds real dramatic and there is a cool optical effect over the credits that I bet former effects guy James Cameron figured out himself. You don’t come up with the T-1000 the first time out, first you gotta do a weird blue and red water ripple heatvision deal like this.

THE TERMINATOR was low budget but not compared to this. I noticed one scene where the part of an ambulance was played by a white van with “AMBULANCE” written on the side in electrical tape. Also a hand-written sign on a door makes it the morgue. But Cameron overcomes this by getting three good principles and getting them to take the whole thing very seriously.

The star is Tricia O’Neal, who looks alot like Adrienne Barbeau, but a little more feminine. To be honest I am kind of afraid of poor Ms. Barbeau but this TV movie version I thought was kinda hot. Anyway she plays a fish expert who gives diving tours to guests at some island resort. She lives with her teenage son (Ricky G. Paull) but not her husband, Police Chief Kimbrough played by none other than Lance god damn Henriksen.

I know I’ve sung his praises before but I gotta say, Lance Henriksen is one of my favorite actors. In some ways it seems like he can’t get a break (if I remember right it was the Newt Gingrich congress that passed legislation requiring him to say yes to any piece of crap movie he is offered) but even though he’s in alot of garbage I don’t think I’ve ever seen one he wasn’t good in. And he’s great at playing over-the-top bad guys (HARD TARGET, STONE COLD) but also sympathetic, sensitive heroes (ALIENS) and tough guys (this one). Here we have a young ruggedly handsome Henriksen, before he had those lines dripping down from his eyes and when he had a ‘c’ in his last name.

Without Lance Henriksen I probaly wouldn’t think much of this movie, but he is working on a higher level and the movie is tied to his back dangling just below that level. You might compare it to maybe a lesser Charles Bronson movie where the movie is made completely watchable by the presence of Charles Bronson. And as a matter of fact I was studying the IMDB and learned that Mr. Henriksen once played Bronson in a TV movie about Jill Ireland. So that would be a good comparison to make because then you could bring up that little bit of trivia there. But also it would be an accurate comparison, so it’s a double.

By the way, Henriksen is referred to as “that robot” at one point. In THE TERMINATOR, James Cameron almost cast him as a robot, but then changed him to a cop. Then in ALIENS he finally did make him a robot, which is one of his best known roles. But it all started with the guy calling him a robot in P2.

I like the somewhat complex and understated relationships here, that’s the best thing about the movie. A guy named Steve Marachuk plays a sort of obnoxious lothario dude who keeps hitting on Ms. Kimbrough and eventually succeeds. He gets more interesting halfway through when it turns out he is not who he says he is and actually knows what the deal is with the piranha attacks. The police chief walks in on this guy in bed with his wife and he is obviously mad but he doesn’t say anything. They don’t tell you why the husband and wife are separated and they don’t fight much. Everything you know about it comes from their performances and from little details like the fact that she calls him by his last name. But as they work together to stop the piranhas you can see their admiration for each other, not in any words but in the actor’s faces.

The very best part is at the end when Ms. Kimbrough and her boyfriend have detonated a bomb underwater and the Chief and his son are on the surface in a boat. And there is a dialogue free stretch where the two sit and you read their expressions as they face the fact that their wife or mother is most likely dead and all they can do is wait to find out. When she comes safely to the surface there is a three way hug and that ends the movie. So there is no official word of a reunion but clearly they have bonded through this experience. You can definitely see echoes of that type of strained relationship with Sarah and John Connor in T2 and the husband and wife in TRUE LIES who also are having marital difficults and become closer through adventuring.

Of course, the scenes with bloody piranha puppets are amusing and there is one badass action moment where the heroine swoops away from the explosives by hanging onto the anchor of a moving speed boat (for real) but the fact that the character relationships and acting performances are my favorite part of PIRANHA PART 2 THE SPAWNING are exactly why I think it is a worthwhile movie. I hope some day we get P2 SPECIAL EDITION DIRECTOR’S CUT.

James Cameron Lance Henriksen
This entry was posted on Monday, July 23rd, 2007 at 9:04 pm and is filed under Drama, Horror, Reviews, Romance, Science Fiction and Space Shit. You can follow any responses to this entry through the RSS 2.0 feed. You can leave a response, or trackback from your own site.