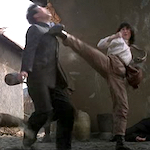 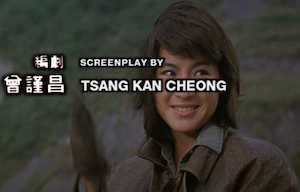 Then she flies off in her plane, casually munching on some sort of sandwich or something. I love her.

Next we meet her co-star, Derek Yee Tung-Sing (HEROES SHED NO TEARS, writer/director of SHINJUKU INCIDENT) as leather-duster-and-scarf-wearing, crossbow-firing, motorcycle-jumping Secret Agent Sky Number One. He secretly meets with cowardly Lord Youda (Lowell Lo Koon-Ting, composer of A BETTER TOMORROW III, THE KILLER, SHE SHOOTS STRAIGHT and many more) about stopping the Japanese forces, led by General Toga (Matsui Tetsuya, motion capture action director for the original Resident Evil video game) from using his inner Mongolian city of Kaal to manufacture chemical weapons. So, yeah, it’s one of those Japanese occupation movies. 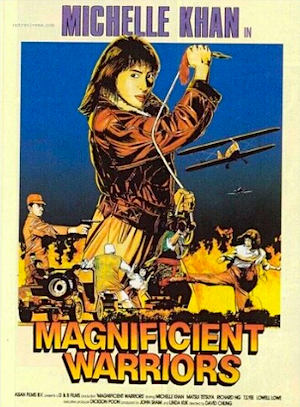 When Ming Ming goes to visit her grandpa (Feng Ku, THE MIGHT PEKING MAN) she finds him tied to a chair and has to battle some soldiers. It’s an outstanding fight where she uses a rope as a swinging weapon, then elaborately tangles a guy up and hoists him with it. But it turns out to be a test to prove “how good my granddaughter is” to his friend Uncle Dragon, “a real big man in this part of the country” who wants her to fly Lord Youda to Canton to deliver information about the Japanese forces. The mission will lead to adventures including, of course, a dog fight with a Japanese warplane. Hers doesn’t have guns, so she has to shoot him down with a pistol. After she smiles and waves.

Here’s a good gimmick: she has to meet Secret Agent Sky Number One, who she will identify by the watch he will wear, which they show to her and then send to him via carrier pigeon. But when it arrives to him he gets spotted, the bird flies away before he can grab it, and this weirdo (Richard Ng, “Mental patient [brilliant],” WHEELS ON MEALS) pops out of a spider hole to catch it. “Tasty bird, and it comes with a free gift too!” he says, clutching the watch and roasting the pigeon over a fire. That character is called “Paulina Wong” if you trust IMDb, or just “drifter con man” according to Hong Kong Movie Database.

Here’s how all our characters come together: A great young martial artist named Chin Chin (Cindy Lau, “Ken’s restaurant staff,” A BETTER TOMORROW II) comes to the rescue of drifter con man Paulina Wong when he’s getting beat up. But she backs off when she finds out it’s a dispute over him cheating at dice, at which point Ming Ming shows up and re-rescues him, because she sees his watch and assumes he’s Sky Number One. So he pulls a Finn-in-THE-FORCE-AWAKENS rebel imposter move. But to his credit he soon saves Ming Ming and the real Sky Number One by sneaking up behind a Japanese spy with a giant mallet. Very heroic. But when they head to Lord Youda’s he says

But of course he’ll end up pulling a Lando and showing up for the cause, so maybe he was being completely sincere about seeing them later?

It gets complicated when Ming Ming comes to rescue Youda and Chin Chin is there too and turns out to have a crush on Youda but her dad comes in to fight Ming Ming so she says “I’ll help you, dad!” and fake-fights Ming Ming while telling her she’ll help her get Youda out.

Soon all our heroes get caught in territory occupied by the Imperial Japanese Army. In the movie’s best action sequence, Ming Ming pretty much takes on an entire village at night. Elements include spears, pole vaulting, roof jumping, a Jeep being chased by horses. She does a crazy motorcycle jump, lights a flag on fire to use as a flaming spear, jumps off the bike to crash-explode a closed gate, grabs onto Sky Number One’s hand to drag behind a Jeep, but loses grip before the vehicle somehow gets spectacular air and crashes through the burning gate. So she keeps fighting and they drive back in to get her, which is when some dynamite gets thrown into the Jeep.

So I guess this is a good time to mention that IMDb lists it as DYNAMITE FIGHTERS. There are only a couple insignificant uses of dynamite, and not by the good guys, so I gotta assume it’s an adjective, as in “Man, those are some really dynamite fighters!” And in that case I guess I prefer that title to MAGNIFICENT WARRIORS.

Unfortunately this is where the movie starts to be less dynamite and magnificent. There’s a seemingly endless sequence about Ming Ming, Paulina and Sky Number One’s impending public execution by bow-and-arrow firing squad, where they somehow have time for a cute conversation where

1. Sky Number One asks Ming Ming her name, and drifter con man interrupts to tell her whole backstory (grandddaughter of Fok, father was murdered 10 years ago by a corrupt cop, she chased him down and got revenge, but now doesn’t have a boyfriend because she’s “a regular tomboy, even dresses up like a man!”). He says he knows all this because “I’m a smart guy.”

2. Sky Number One tells drifter con man’s backstory (parents died when he was 5, had to steal to survive, made enemies, been on the run for years). His reason for knowing is that “With guys like you it’s always the same old story.”

3. Sky Number One starts to tell his backstory (adopted by a bandit at 6), but Ming Ming interrupts to finish the story (“And then you rebelled against him and wiped out your stepfather’s syndicate, but your conscience wouldn’t let you send him to prison, and now he’s a successful accountant in Hong Kong. Deep down you always wanted to be a doctor… after that, the head of the secret service rewarded you for your courageousness and you became a secret agent. You started on the lowest rung and in two years became their top agent.” And she says not to ask her how she knows all that – it’s some secret trick she learned from Grandpa.

No offense to screenwrtier Tsang Kan-Cheung, SEVEN WARRIORS, SHAOLIN SOCCER, KUNG FU HUSTLE, THE MERMAID), but I don’t know if you could find a more transparent case of “we wrote short character bios and didn’t want them to go to waste.” Also, this is one of those ones where you’re surprised by the information that the heroine is considered un-feminine by the other characters. (See also WING CHUN.)

That’s followed by an overly drawn out stretch with Lord Youda and then Chin Chin attempting to stop the execution and finding themselves tied up with the others. Eventually a crowd of Kaal onlookers rise up to save them, and Youda finally has the guts to declare war on the Japanese. The sometimes-distractingly-rousing score by Wing-leung Chan and Renato Piccioni seems a little too excited as the literally torch-wielding mob chant “War! War! War!” and as Sky Number One fires a flaming arrow into a Rising Sun flag.

So the last act is a huge battle with the Japanese army using rifles against the Kaal citizens’ arrows, plus the gatling gun, some fire traps and Ewok-style rocks. There’s exploding and zip-lining and it gets better when Ming Ming jumps down and starts kicking various dudes and burning structures. The drifter uses his spider hole tricks and stuff. Eventually a larger army arrives with trucks and tanks, but backs off because “The people of Kaal chose to burn their city rather than surrender it to us, sir.”

It’s all fine, but I was so much more excited about Ming Ming the independent adventurer than Ming Ming, one of the people in a giant military battle. And then the heroes come across as such callous asswipes in the last scene. I mean, it’s Lord Youda’s job to say something positive as all the survivors stand in a crowd watching their home burn to the ground. But I think it’s inappropriate for Ming Ming to say “You’re right, you can rebuild your city!” Worse, Sky Number One immediately starts talking about his mission being completed, and they openly laugh about going on a plane trip together. Read the room, guys.

(Also, did they really finish the mission? They saved the city but they seem to have forgotten about bringing Lord Youda to Canton. Unless that was just an over-thinking of how to get Youda to tell them about the chemical weapons.)

MAGNIFICENT WARRIORS is directed by David Chung, the same guy who did ROYAL WARRIORS. He was also cinematographer of GOD OF GAMBLERS, ONCE UPON A TIME IN CHINA and many others. There are three credited “stunt directors”: Karkon Fung (ZU: WARRIORS FROM THE MAGIC MOUNTAIN), Tao Hoi Kong (“Brother Hoi” in THE GRANDMASTER) and Wai Tung (BODYGUARDS AND ASSASSINS). Stanley Tong was assistant stunt coordinator five years before directing Yeoh in SUPERCOP, and Johnnie To was second unit director six years before directing her in HEROIC TRIO.

I wish this was more focused on Ming Ming instead of sidelining her as the ensemble grows. But it’s worth watching for her spunky charm and for the elaborate action sequences. I definitely wouldn’t call it magnificent and/or dynamite, but it’s pretty cool.

I’m still a physical media guy, but if you click on the link it says it’s also on Prime Video

Chan Ging Cindy Lau David Chung Derek Yee Feng Ku Michelle Yeoh Richard Ng
This entry was posted on Friday, March 20th, 2020 at 1:52 pm and is filed under Action, Martial Arts, Reviews. You can follow any responses to this entry through the RSS 2.0 feed. You can skip to the end and leave a response. Pinging is currently not allowed.

One Response to “Magnificent Warriors”