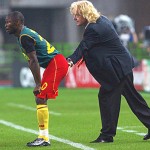 Soon all americans will know about the power of SHAOLIN SOCCER, because Miramax is doing one of their trademark trim jobs on it and releasing it here. But if you haven’t heard of it yet this is what it is. Shaolin kung fu + soccer = this movie. Duh.

The director, Stephen Chow, plays a penniless shaolin master known for his “Steel Leg”, who believes in applying shaolin principles to all aspects of life, from parking to hedge clipping. He’s always trying to come up with ways to promote the shaolin techniques to the general public, like combining them with music and dancing. But these type of ideas don’t go over very well, everybody wants to beat his ass after he demonstrates them and he doesn’t believe in hitting back.

Then he meets a crippled soccer coach. This dude was the best player in the game until an ugly incident where he missed a penalty kick and the fans jumped him and snapped his leg. Now he’s pathetic, mistreated by the corrupt rival who set him up for his “accident”, who runs a soccer tournament where the winner gets a million dollars.

But when he meets ol’ Steel Leg they decide to round up the young man’s washed up shaolin partners (all of them working shitty jobs and not putting their kung fu to use) and turn them into a soccer team. Each of them will use their different kung fu specialties to kick the ball around and what not.

And you can pretty much imagine where it goes from there, with the Shaolin team working their way up to the championship. Now look, I’m american so obviously I don’t know this for sure, but I don’t think this is an accurate depiction of soccer. In this movie most of the teams are gimmicky like the racers in DEATH RACE 2000. For example there is one team that is all women with mustaches. The team to beat is called “The Evil Team”, they wear all black and they use american steroids to play like super robots.

Let me tell you what’s really remarkable about this picture though. When you imagine a movie combining soccer with kung fu, you picture something really ridiculous, action packed and over-the-top. Most filmatists, I think, would not be able to create a movie living up to what you imagine them doing with that concept. Here that is not a problem. The games in this movie are like soccer between gods. Like Superman vs. Hercules. Nobody would call soccer boring if it was really like this. Typical moves for the Shaolin team include jumping over an opponent holding the ball between your ankles, or jumping 15 feet in the air, flipping, kicking the ball all the way across the field into the goal. In the championship game especially it turns mythic. The ball will send ten people flying through the air at once. It will spin so fast it creates a wind that ripples across the field and fills the air with a shower of grass blades. It flies so fast it burns the air, spins in the goalie’s hands and shreds off all his clothes.

Like the players in the game, this movie combines different styles that you wouldn’t necessarily expect to see together. There are many homages to kung fu films of the ’70s (shaolin temple style fantasies, a goalie who looks like Bruce Lee) but the games themselves are loaded to the brim with computer effects and even matrix style bullet time shots. It’s a serious story of friendship, redemption, overcoming evil, blah blah blah but it’s also a real funny comedy. There are lots of goofy moments like when a substitute comes in for the injured goalie and right before they kick the ball at him he pulls out a cell phone and calls some woman to say that he has always loved her.

This is a great fantasy, a great sports movie, a good time.

Karen Mok Stephen Chow
This entry was posted on Monday, November 11th, 2002 at 3:41 pm and is filed under Action, Martial Arts, Reviews, Sport. You can follow any responses to this entry through the RSS 2.0 feed. You can skip to the end and leave a response. Pinging is currently not allowed.

One Response to “Shaolin Soccer”