HEROES SHED NO TEARS is not just a great phrase to tattoo on your back or use as an adult recreational softball team name, it’s also a messy pre-A BETTER TOMORROW John Woo picture. We always talk about how the Hong Kong film scene that Woo thrived in was the Wild West compared to the Hollywood that ruined him. Well, then this was Rome or something. This is Woo when he was a straight up exploitation director. He was filming in Thailand, and shit must’ve been even crazier then than in the Tony Jaa era, ’cause they say they were using live rounds in some of these shootouts. Just shoot at stuff behind the actors. Squibs are too much trouble.

Eddy Ko has a great stoic screen presence as a Chinese mercenary on a mission in Thailand to crush some drug lords. After a battle he comes back to his little shack where his son Kenny and his late wife’s sister are waiting for him. Unfortunately he gets followed by some soldiers and the movie is about these mercs and their non-combatant associates traveling through battle torn rural Thailand trying not to get murdered by soldiers or a native tribe of skilled hunters. 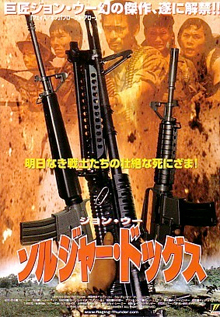 The best and most crucial shot in the movie comes in a scene where they come across soldiers stopping a car full of western journalists and molesting them. It’s the ol’ crosshairs shot – rifle-scope POV on a woman’s back as she runs away. And this is the type of movie where the bad guys do indiscriminately shoot innocent women in the back, so we’re bracing ourselves for it. But suddenly she drops to the ground, out of view of the scope, revealing… Ko in a badass pose pointing his gun right at us! He shoots, and in the next shot we see that he doesn’t just hit, he hits through the scope and takes out the eye. So for the rest of the movie we have a sicko general with a bandage on one eye trailing our guy for revenge.

The movie takes on a little bit of a WIZARD OF OZ feel as they pick up more people along the way – the kid, the journalist, an American war deserter that he knew in his old days. That guy looks like Mathieu Kassovitz and seems to practice the BENEATH THE PLANET OF THE APES bomb-worship religion. We first meet him in a meditating yoga pose, wearing a bomb vest. I think he has two ladies, and there’s a completely out of place sex scene that apparently the producers added in against Woo’s wishes.

The son is kind of funny. He wears a striped shirt and short shorts and sounds like he’s dubbed by an adult woman, like a kid in a Godzilla or Gamera movie. He must not be a hero yet ’cause he cries alot, and seems like such a liability to have along. But in the end he runs in and rescues dad after he’s been strung up for 3 hours. There’s also a scene where the villains surround Kenny with a ring of fire and he seems to be burned alive, but then crawls out from under the dirt that he buried himself in to survive. (Didn’t Daigoro do that in one of the Lone Wolf and Cubs?)

I actually watched this before you guys recommended it on the EASTERN CONDORS review, but thanks for that anyway. It doesn’t compare to that movie, or to the later John Woos. But it’s got some good stuff in it and is important as a bridge between Woo’s early movies and his revolutionizing of the Hong Kong gangster melodramas. With its funny tangent about some of the other mercenaries gambling with the Natives it definitely reminds me of an old school kung fu movie, but then it gets into some serious gun fights.

It’s not essential Hong Kong cinema, but it’s uniquely enjoyable, an odd little journey just over the border of a place I like to call…

Well, maybe it’s more a state of mind than a place. Anyway, it’s a good zone, whatever it is exactly.

Eddy Ko John Woo Thailand
This entry was posted on Wednesday, July 18th, 2012 at 1:48 am and is filed under Action, Reviews. You can follow any responses to this entry through the RSS 2.0 feed. You can skip to the end and leave a response. Pinging is currently not allowed.

24 Responses to “Heroes Shed No Tears”