Sammo plays a guy named Moby, who’s introduced sporting shades and a perm that almost looks like jheri curls. He’s working (without pay) for a sleazy p.i. (Herb Edelman, a.k.a. Dorothy’s ex-husband Stanley on Golden Girls) who leaves town to hide from a gambling debt and leaves Moby in charge, causing him to strut around town dressed like he’s in the “Smooth Criminal” video, whisper-bragging to everyone that he’s “Acting Chairman of Matt’s Detective Agency.” He also takes a case to find a woman from an old photograph (oh my god this could turn into THE GIRL WITH THE DRAGON TATTOO) and it seems like all he really knows how to do is look for some guy named Fatso to ask him about it.

The most dramatic character introduction goes to Thomas and David’s mobile place of business, the Everybody’s Kitchen food truck, which gets what first sounds like a spaghetti western theme, later with catchy vocals that kept reminding me of “Don’t Let Me Be Misunderstood.” It comes flying over the horizon toward the camera catching air in slow motion. It’s really a high tech yellow van with two spoilers on top and (for some reason) a monitor with an animated depiction of the way it opens up and folds out into a counter and open kitchen. It reminds me of the high tech car Jackie drives as his unfortunate “Jackie Chan” character in CANNONBALL RUN.

There’s a long stretch of this movie that’s more about hijinks and relationships than stunts or fighting, so I’m glad there are a couple good bits right at the beginning here. First, a gag about them having to exit their second floor apartment over a balcony and bouncing off an awning. Second, Thomas (mostly a double) goes around taking and delivering food orders on a skateboard. David throws the board to him and he does a flip and lands on it. Third and best, a classical action movie tangent: a bunch of assholes with leather jackets, sleeveless vests, bandana headbands, giant mohawks and what not roar into the public square on motorcycles, doing wheelies and donuts, jumping over people, scaring away customers and knocking Thomas off his skateboard. So Thomas and David kick them off their bikes, beat them up and otherwise humiliate them in front of an appreciative crowd.

The actual plot starts when they go to visit Yuen’s dad (Paul Chang Chung, ABOVE THE LAW) at a mental home and meet his new girlfriend (Amparo Moreno, THE LIFE OF DAVID GALE), who is accompanied by a beautiful daughter named Sylvia (Lola Forner, PROJECT A, ARMOUR OF GOD) that they nickname “the princess.” They both want to ask her out, but Thomas leaves it to super-nerd David, who blows it.

Later when they’re on the job selling food they see that Sylvia is working as a high class prostitute. Or at least she’s taking clients upstairs. After running off with a rich john’s money she hides in the back of the van and (over Thomas’s objections) they bring her back to the apartment to hide out.

I found Princess Sylvia to be a likable trickster sort of character. All the men cartoonishly lust after her and she keeps taking off with various people’s money, cars, etc. She crashes into Moby’s car in a convertible she stole and gives him the name of the actual owner to pay for his repairs.

Moby turns out to know Thomas and David. He seems to be their friend that they like to make fun of, and there’s a funny bit where they meet him at a club and agree beforehand to say no to everything he says. When that gets awkward they just start talking nonsense to him or pretend they can’t hear him. Of course the mystery turns out to involve Sylvia, and he’s trying to ask them about her, so they’re basically stonewalling his investigation just to fuck with him.

I know Jackie can be broad and muggy, but I think there’s alot of funny stuff in this. Like the serious way he tells Sammo “For my own safety, we better split up.”

Sylvia gets them into trouble. They beat up some dudes they see chasing her, then find out it was because she stole a wallet, and they have to run from the law. Classic Jackie move: the cops grab them and they just wiggle out of their shirts and run away without them. Next we see them getting out of their van each wearing two waist aprons covering their chests, which they don’t change out of before a scene that’s otherwise played totally straight, where David tries to ask Sylvia out and learns her tragic backstory. She ends up working for their food truck business and I’m fond of the ’80s fashion in this portion of the movie which includes her wearing an orange jacket and headband and Moby wearing a yellow painter’s hat.

Of course the movie gets going when henchmen in suits and ties keep coming after the four of them. They get chased in the van and shoot condiments out the back. They hide out in a subterranean homeless encampment that Thomas calls “a headquarters of filth,” according to the translation I saw. They climb into a castle. It’s kind of funny to me that the villain (Jose Sancho) is called “Mondale.” I don’t think it’s a commentary on Walter Mondale, the former U.S. vice president who was then running for president, but maybe his prominence made it seem like a good name for a westerner.

Famously one of the thugs is Benny “The Jet” Urquidez (kickboxing champion and choreographer of ROAD HOUSE), whose fight with Jackie has often been called the best film fight of all time. I wouldn’t go that far, but it’s definitely a great one. There’s one break early on to cut to Sammo in a sword duel (I like that his white opponent is clearly Asian as soon as he puts a fencing mask on), but the bulk of the fight is continuous, just the two of them alone in a large dining room. There’s a chess match quality to it, lots of pausing to look for an opening, to catch their breath, to take off their jackets, to shake off the pain. It’s a little like the also classic duel between Bruce Lee and Chuck Norris in WAY OF THE DRAGON (the original Hong Kong martial arts movie filmed on location in Europe).

The music builds and they get sweatier and more wobbly and it culminates in a Tony Jaa-esque flying knee that knocks Benny out a window. He hangs there and he’s panicked but I like that he says “If you have the guts, pull me up and we’ll go another round.” It seems like they both know he doesn’t have it in him to go another round, but it’s understood that he needs to save face.

Though that’s the famous fight it actually ends before Yuen vs. World Karate Champion 1978-1980 Keith Vitali (REVENGE OF THE NINJA, AMERICAN KICKBOXER 1), which isn’t as long but has a great bit where David tires the guy out by making him chase him around the room as he flips over various furniture. They land slumped on a couch and in a love seat, too tired to continue.

I like the international-ness of the movie, centering on these Chinese immigrants in Spain without even ever addressing what brought them there. I mean, their business seems to do okay, David’s dad lives there, it’s a fun neighborhood (despite motorcycle punks), why wouldn’t they want to live there? Apparently the location was chosen partly because it was easier to get permits for the many stunts filmed on location outdoors, and because their growing fame in Hong Kong was making it harder to shoot in public there. There seem to be a whole lot of Chinese people in Barcelona, though. I wonder if that’s accurate, or if it’s because the crew and stunt team were being used as extras?

This is pretty widely known by now, but in case you’re wondering about the title, yes, it was supposed to be called MEALS ON WHEELS. But Golden Harvest pulled a switcheroo because two other movies starting with M (MEGAFORCE and MENAGE A TROIS) had flopped for them. That seems like a weird thing to do, but remember that the last Harry Potter movie was released as PARRY HOTTER AND THE HEATHLY DALLOWS 2ART P, and nobody complained about that. It just seems natural, like a meal with a wheel on it.

From what I can tell, WHEELS is mainly remembered for the weird title and the fight with Benny the Jet. I believe Edgar Wright posted a clip of the fight on Twitter a while back, calling it his favorite, and got a bunch of people excited. And I found a guy called Marten Go a.k.a. “preserveddragons” who liked it enough to make detailed statues of Jackie and Benny: 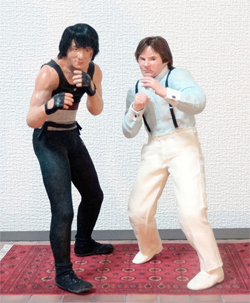 I was thinking about making an “Everybody’s Kitchen” logo t-shirt, but I’m a busy man. Maybe later. 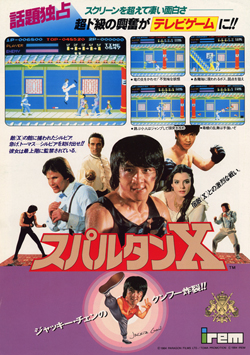 Another weird legacy of WHEELS is that in Japan, where it’s called SPARTAN X, they made a tie-in video game under that title. Apparently it doesn’t have the yellow van or anything from the movie, but does have characters named Thomas and Sylvia. It’s historic because it’s considered the first “beat ’em up” or “brawler” game, and its creator Takashi Nishiyama later created one of the most celebrated in the genre, the Street Fighter series.

That’s how video games connect Jackie and WHEELS ON MEALS to Jean-Claude Van Damme (who starred in the first STREET FIGHTER movie). But they also connect Jackie to another beloved Brussels-born film icon: director Agnès Varda! Outside of Japan the Spartan X game is called Kung-Fu Master, which is why that’s the title of a 1988 Varda film that centers on a character who likes playing the arcade game. 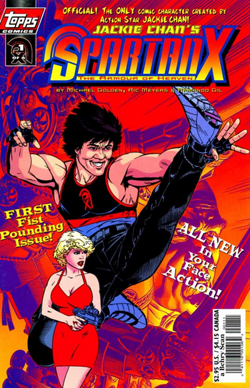 The game had two sequels, Vigilante (1988) and Spartan X 2 (1991). In 1997 and 1998 the title was also used for the American comic books Jackie Chan’s Spartan X: The Armour of Heaven (published by Topps) and Jackie Chan’s Spartan X: Hell Bent Hero For Hire (published by Image). Variant covers use stills from ARMOUR OF GOD, so I have a hunch they never really tell us anything more about Thomas and David’s adventures in mobile catering. Fingers crossed for 2 WHEELS 2 MEALS some day.

Benny "The Jet" Urquidez Herb Edelman Hong Kong action Jackie Chan Keith Vitali Lola Forner Sammo Hung Spain Yuen Biao
This entry was posted on Tuesday, July 9th, 2019 at 1:06 pm and is filed under Action, Martial Arts, Reviews. You can follow any responses to this entry through the RSS 2.0 feed. You can skip to the end and leave a response. Pinging is currently not allowed.

37 Responses to “Wheels On Meals”