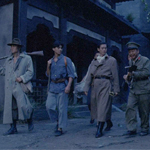 The screenwriter is Kan-Cheung Tsang, who wrote ROYAL WARRIORS and a bunch of Stephen Chow’s movies including SHAOLIN SOCCER and MERMAID. He sets this version in “the Warlord Era” or “Chaotic Era” of China, when veterans wander around as mercenaries or thieves, some of them led by hairy-mole-faced Piu (Lo Lieh, CLAN OF THE WHITE LOTUS) to terrorize and extort a defenseless village. So of course a couple of the villagers go into town and they find Chi (Adam Cheng, ZU: WARRIORS FROM THE MAGIC MOUNTAIN), a once respected, now alcoholic commander who was in the war with Piu, to gather up some of his old troops. They’re a colorful set of characters, the most impressive being the suave knife thrower and Karl, the big blacksmith who walks away from repairing some lady’s pan the second the Commander asks for help. He carries around a giant spiked club, almost as big as a person, which is enjoyable in any genre. We could use more of those in cinema.

It follows the usual pattern: they reinforce the village, they train the villagers, they have some conflicts with the villagers and with each other. This one has a love triangle, and a guy who tries to steal some treasure hidden in the village, much to the shame and disappointment of the others.

The military background is a pretty decent translation of the samurai codes of the original. Of course it’s not the same thing, but there’s both a comeradery and a code-of-honor quandary that comes from these people who fought together for a government now on their own and disagreeing about fighting for money or for what’s right. 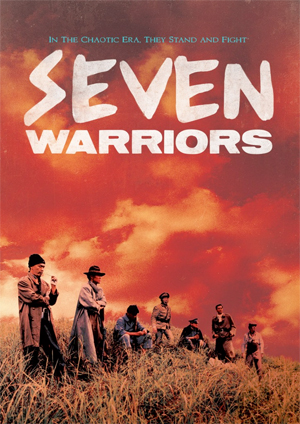 I guess this takes place in the 1920s, and with all the dusters and guns it’s more like a western than a samurai movie. They can’t pretend it doesn’t partly come from THE MAGNIFICENT SEVEN because of Ghost, the greedy character who’s always trying to get treasure and the memorable knife vs. gun duel that’s an embellishment on James Coburn’s introduction in the western. This guy has to duel a sharpshooter and actually leaps into the air to throw a knife into the guy’s throat.

The young woman hiding in the woods is not disguised as a male and doesn’t have a protective father. In this version she’s a survivor from a nearby village that was attacked, who the robbers have been searching for. The young doofus sneaks out to bring her food, but so does another guy, and he becomes very jealous and insecure about his masculinity. He eventually confesses that he’s never dated a woman before, which he looks way too old for, but maybe things were different back then.

We learn that the love rival is a widower and lost his wife either to these robbers or people like them, so that takes place of the villager who lost his wife, or maybe Mifune’s personal connection to the village because of being a farmer and orphan.

A highlight is the scene shown on the cover where the warriors are all sitting quietly on a hill. But there’s a weird bit of sexist treatment there. They’re passing a bottle down the line and the woman reaches for it, but the boyfriend skips over her. Toward the end of the line they also skip Ghost, who they’re all mad at for getting them into trouble by trying to steal the treasure. But then they relent and give it to him, and he’s relieved. Takes two swigs and everyone smiles. All is forgiven.

But down at the other end we can see her pouting, the boyfriend putting his arm around her like he’s reassuring her. Why didn’t she get a drink? Not fair.

Anyway, that’s a scene all about bonding and looking badass and quietly contemplating the danger ahead of them, which makes it one of the parts that best captures the soul of the original.

It ends very similarly to SEVEN SAMURAI, and with the same amount of warriors dead, but the battle seems like the most violent version of this story. The robbers have so many machine guns and so many bullets and they seem to never stop firing them. There’s some flipping and some swinging on ropes and many explosions and saving a little kid named Harvest from a minefield. There’s a great scene where Karl bursts through a wall like Kool Aid Man and starts bashing motherfuckers’ heads in with his club, blood just splashing off of them. Barbarian berserker shit. When he (SPOILER) gets shot a bunch of times he stays on his feet long enough to go Incredible Hulk on a support beam and pull the entire structure down on top of them all.

I was still convinced they were gonna pull an “actually, he was wearing a vest!” type gag, since as a blacksmith and they could say he invented some kind of metal plating that would block the bullets. But no, they follow the original story, and they’re looking for the ol’ heroic bloodshed anyway, so this is a movie that will get dark. (SPOILER) The knife thrower gets to revisit his badass introduction when the villain runs at him on his horse. But his knife misses, and his entire arm is chopped off, and then we realize that also his head got samurai-sliced and he drops dead.

A version of this story made in this era of Hong Kong cinema has its advantages. For example, this is the version of the story where the villagers learn to use their farming tools as weapons and it actually looks like it could help. And when the warriors first confront the villains in a tense Mexican/Hong Kong standoff and negotiation, it really feels like everybody might get executed right here. Of all the versions this might feel the most genuinely threatening, and it probly has the most overall violence. But of course it doesn’t have a sliver of the depth of character or theme of SEVEN SAMURAI, and the characters (though fun) are more cartoonish than that or MAGNIFICENT SEVEN. Those things are to be expected, but I also have to admit that it’s only okay, not a standout, by the standards of Hong Kong guns and martial arts movies. The middle portion isn’t about action and though I enjoyed the big battle I can’t say it approaches the thrills or craftsmanship of any of our favorites from John Woo or the Shaw Brothers.

So there’s still room for the great martial arts version of SEVEN SAMURAI. I’m looking at you, Gareth Evans or somebody? Until then this one is a fun placemarker.

Adam Cheng Hong Kong action Sammo Hung
This entry was posted on Thursday, September 29th, 2016 at 12:53 pm and is filed under Action, Martial Arts, Reviews. You can follow any responses to this entry through the RSS 2.0 feed. You can skip to the end and leave a response. Pinging is currently not allowed.