THE ABYSS is probly James Cameron’s most original movie. It’s not primarily based around people getting killed by a monster or a bad guy. It’s more like man vs. scientific challenge, trying to fix things, to not run out of air, to survive the pressure (both literally and figuratively) of being deep underwater. Okay, so Michael Biehn snaps from a bad case of the Underwater Blues, and they gotta fight him, but most of it is more problem solving and scientific analysis like APOLLO 13 or QUATERMASS AND THE PIT. And then it turns into CLOSE ENCOUNTERS OF THE THIRD KIND. And a little 2001. But underwater, so it’s completely different. Water is different from space. You can’t drink space. 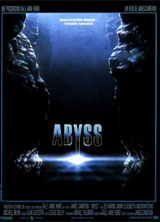 I don’t think I’d seen this since the ’80s, so it was cool to follow through on my vow to review all the James Cameron movies. I really didn’t remember much. Turns out it’s about a team of deep sea oil drillers roped into helping Navy SEALS check a downed submarine for survivors and bombs. Ed Harris leads the oil workers, Biehn the SEALS, Mary Elizabeth Mastrantonio is Harris’s “iron bitch queen” about-to-be-ex wife who designed their submersibles and claims she’s only concerned about their safety. Also Chris Elliot (CABIN BOY, MANHUNTER) is in it.

In a way Cameron went into the abyss when he made this -he’s never shaken his worship of deep sea diving, of heavy duty equipment or of pushing past the boundaries of visual effects technology and movie budgets. Bill Paxton re-enacts some of this deap sea exploration stuff in TITANIC and again in real life in the Imax documentary GHOSTS OF THE ABYSS. Cameron is worshipful of macho engineer types, of technology (although he also fears it), and he helped popularize the cliche of the quirky science professional (guy with rat here, guy who looks like Harry Knowles in TITANIC, used by others in TWISTER, EXECUTIVE DECISION, etc.) He’s pushing cutting edge technology in the story (the submersibles, the breathing fluid) and in the making of the movie (the CGI water tentacle that led to the T-1000 that led to JURASSIC PARK). But like T2 and ALIENS the humanity shines through the cracks from beneath the pile of machinery. Through all the near-death experiences there’s the ongoing thread of Harris and Mastrantonio’s love-hate relationship, and it really ends up feeling like that’s what the movie’s mostly about. Come to think of it their devotion to each other in the face of watery death is a more three-dimensional version of the romance in TITANIC.

And the death feels like a genuine threat. I actually had a hard time watching the scene where she crushes her head against the ceiling and can’t escape from the rising water level anymore. They must’ve made her really do that. I don’t think they made her stop her heart (union rules prevented that) but the CPR scene sure is upsetting, with her limp, wet body being manhandled like that. It really looks like there’s no life in her, and makes you contemplate the horror of going through that with a loved one. How long do you do CPR before giving up? (I guess now we know to try Harris’s slap her and call her a bitch method of resuscitation before declaring anybody dead.)

So just the water adventure and relationships are enough, but you also have this matter of underwater aliens (SPOILER). The way they handle it is pretty great – they saw this amazing thing and they’re in awe of it. They don’t spoil it by talking too much about the larger implications, or turning it into some thing where they gotta hide it from the government or some shit like that. They do decide that they’re aliens, not Atlanteans or highly evolved super jellyfish. Or weather balloons. One guy describes it as an angel. I’m sure other people have interpreted them in different ways. They may be where we got our idea of sea serpents, mermaids, sea monkeys and Aqua Man.

By the way, I only remembered the part with the water tentacle thing – I totally forgot the luminescent jellyfish people. Now days you’d see that and just know it was CGI. This one I know can’t be CGI, so I don’t know how the fuck they did it. These are some topnotch creatures. They are not only the best water aliens in a movie (fuck off COCOON) but would even be in a high percentile when held up against land-based aliens.

With all that equpiment and lingo and everybody seeming to know what they’re doing, and the way it goes from accident to rescue mission to CLOSE ENCOUNTERS and 2001 to heroic sacrifice and peace between worlds, I’d have to say this is a huge movie. But it rolls out so naturally, one problem leading to the next until he’s sitting at the bottom of that fuckin abyss, completely abyssed, nowhere left to go (he thinks). It doesn’t feel like a typical blockbuster structure trying to force excitement. It has that confidence I’ve talked about, where it convinces you to just hold on and trust that it will bring you places, and you do and you don’t regret it.

I like the writing too – the way it brings things up casually that come up again later. My favorite is when the bearded guy is bickering with somebody and threatens him with his fist, saying, “I used to call this ‘The Hammer’.” A good 90 minutes later there’s an incredibly satisfying punch that made me yell out “The Hammer!” But the movie has enough respect for us to not point it out.

And man, what about that bit where Harris throws his wedding ring in the toilet, then immediately regrets it and fishes it out? That turns his hand blue for the rest of the movie, so much later if the camera shows his blue hand it reminds you he hasn’t give up on his marriage.

This is a great movie filled with all of Cameron’s strengths and obsessions (technology, underwater, strong women, marital problems) and it never could’ve happened without the studio having faith in him and giving him a ton of money to do whatever the fuck he pleases. He not only had Final Cut, he also was Licensed To Go Hog Wild. But I have to admit, the suits were right about the ending. This was my first time seeing the director’s cut, and I’m afraid I draw the line at that corny DAY THE EARTH STOOD STILL alternate ending. In the theatrical version the water aliens rescue Harris from drowning and, through questionable underwater technology, replay to him one of his text message to show that they’re repaying his willingness to die to save them. In the director’s cut they also show him a montage of war-related stock footage and a live news report about a giant wave about to engulf civilization. But then the wave peacefully subsides because they were so impressed by what he did.

In other words, “Man, I’m glad you came, because we were just about to destroy mankind to stop war! Don’t worry, we’re putting away the wave right now. No hard feelings, right?”

Was it a coincidence, just real lucky timing? Or was the wave plan a response to the submarine crash, like one of those international incidents? Or was it payback for Biehn putting that bomb there, and if so why weren’t they trying to do something about the bomb themselves? Seems like if they knew about the bomb they’d try to do something about it. But maybe I just don’t understand their culture.

I noticed a couple odd things on the credits. The first assistant director was Newt Arnold, the director of BLOODSPORT. The stunt coordinator was Dick Warlock, who played Michael Myers in HALLOWEEN II. The water tank they filmed most of it in was located at Earl Owensby Studios in North Carolina, same place where crappy movies I watched last month like FINAL EXAM and HOUSE OF DEATH were filmed.

Another interesting bit of trivia, the crew has one of those Garfield dolls suction-cupped on the window of their submarine or whatever it is. Those were real popular on car windows in the ’80s, but this was actually a little in-joke from Cameron. Alot of people remember that he had the rights to Spider-Man for a while, he was developing that and supposedly Leonardo DiCaprio was gonna star. At that time though he had his eye on an even more beloved work of comic strip art, the American classic “Garfield.” Cameron worked very closely with Jim Davis to stay faithful to the original strips in his script and storyboards, but I’m sure he also had a real Jim Cameron spin on it. Although I’m sure all that research is what led to the technology of AVATAR, they never quite cracked Garfield and gave up before it was finally made by a much more capable team, and motion picture history was changed forever.

That last paragraph was bullshit I made up, by the way, but all that about Michael Meyers and Earl Owensby and everything was true.

I don’t really know whether or not when you gaze into THE ABYSS, THE ABYSS gazes also into you. All I know is you should gaze into it regardless because it’s a good movie and we all could stand to gaze into some more good ones.

Ed Harris James Cameron Michael Biehn
This entry was posted on Saturday, November 14th, 2009 at 7:01 pm and is filed under Reviews, Science Fiction and Space Shit. You can follow any responses to this entry through the RSS 2.0 feed. You can skip to the end and leave a response. Pinging is currently not allowed.