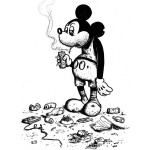 In 1940 the Walt Disney animation company unleashed a bold new experiment, Fantasia, a collection of animated pieces inspired by classical music. Unlike say a Bambi or a Pinocchio this is a movie with no dialogue or traditional feature length narrative story. In a stunning display of craftsmanship and artistic achievement the animators listened to the music and created stories, sometimes retelling a fairy tale like The Sorceror’s apprentice or riffing on some goofball premise like dancing hippoes or mushrooms. At fantasia’s best moments it triumphs in bold flourishes, splashing abstract type shapes across the screen or depicting evolution and the rise and fall of the dinosaurs. My favorite is the night of the bald mountain king sequence in which a demonic demon comes out of the mountain and all the ghosts fly up, and then afterwards a whole bunch of people are marching along with candles I believe.

This film fantasia was Mr. Disney’s attempt at respectability for the Artform of the funny cartoons however everyone pretty much told him to go fuck himself on that one. The movie received poor reviews, was cut down to 81 minutes and used as a b-movie on double bills, and even 22 years later Igor Stravinsky described it as “unresisting imbecility.” But I mean the dude’s name is Igor how do you expect him to behave, go get me a dead body Igor you piece of shit. 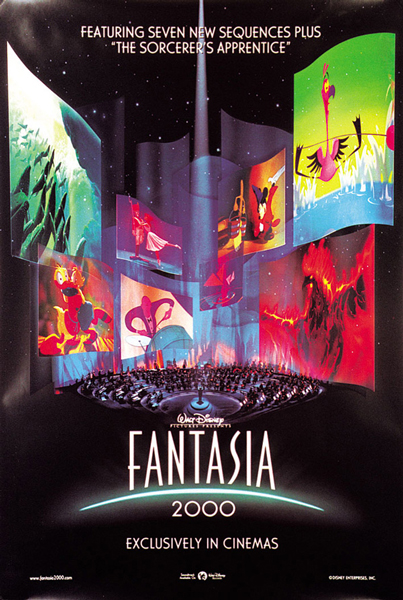 Anyway it wasn’t until the 1960s that LSD hit the market and people were more willing to sit through the movie. Today many film academics and grown adults who watch cartoons everyday believe that Fantasia is the best of the Disney cartoons. They recognize the uniqueness of the concept, the way it respects the cartooning as an Artform and seeks to elevate its craft, as well as the fine work done by the animationists and the musicians on the many great sequences. However I think the whole idea of this being the disney movie they most enjoy to watch is a HUGE load of shit, i mean tell me do you have more fun watching the pinocchio movie or watching this fantasia. And how many times have you watched it all the way through without falling asleep, pal, seriously I’m asking.

Anyway it was with this new acclaim for the fantasia that roy disney, who I believe is Walt Disney’s uncle or brother or son or something related to him at least, suddenly “remembered” that they had always planned to release fantasia with new sequences. And that is what they did with the fantasia 2000 and here is my review.

Anyway this movie is very low on plot and characterization but has a lot of music. What this is about is a bunch of triangles that fly around, and they look like butterflies and flowers and then they look like bats. Then there are some flying whales and some sad people walking around New York having trouble and a flamingo with a yoyo. Then there is a flashback to part 1, where Mickey Mouse does magic and kills the shit out of a broom with a fucking ax! Which is crazy but I’m not sure what the relevance is here, there is nothing in there you need to know in order to understand what is going on in the sequel. This is basically a standalone with a whole different set of characters, you do not need to see the first one to understand what is going on.

The thing really gets rolling at the end when Donald Duck helps Noah to load all the animals on the boat, I guess so Mickey doesn’t ax them I’m not sure but this is the climax of the picture. This is basically a ripoff of the old titanic movie, except also the bible. Donald gets separated from his girl duck and they think each other are dead, but at the end they find each other and it is pretty sweet. Although the donald I remember is a total prick and this is kind of out of character I think it is the second best.

The best scene is the very end, which is reminiscent of the japanese piece the Princess Monononoke. A couple of europeans are responsible for this one and it really doesn’t look like the disney drawings. It is about a beautiful nature spirit gal who flies around spreading the nature. By this I mean flowers, trees, plants, etc. She flies around and dances always changing shape, sometimes she is a little nymph sometimes she stretches into a might pair of wings. There is so much detail in this drawings it is incredible and hypnotic, so many tiny lines. Then she faces down this firebird but she survives and she is made of ashes and then she renatures the world again and there are millions of tiny flower petals shooting all around this gal and there are gooses everywhere although I think that may have been a flashback from the time I watched Fly Away Home on shrooms. But anyway it is really beautifully beautiful and it reminds you of the power of Positivity and the way the Universe is in control of all the elements and the powers of wind, water, etc. plus it is the one that most reminds me of what I like about Part 1 except taken to a new level of beautiful beautiful poetic beauty. whoah man let me get a glass of water.

There are real action parts where famous celebrities like Bette Midler and the dude from the jerk introduce the cartoons. I think the idea here is to keep the focus off of the animation so that disney can lower their wages for the animationists. It kind of makes it feel like a tv special instead of a movie when bette midler comes out and starts talking about the making of the movie. I have had enough of this postmodern self referential crap anyway, how about a movie without a movie within the movie please thanks bud.

The best idea about this movie is to release it for Imax which is a special movie theater with the biggest god damn screen you’ve ever seen. I guess the film is also big so it projects bigger and better or who the fuck knows, something about it is good, I guess. The screen is so huge and it goes so far down to the ground below you that as soon as it turns on, you feel like you are going to fall out of your seat and plummet to your death. I must admit I am not afraid of many things, I am not afraid of a severed arm or a Samoan with a butcher knife but there is one thing I am afraid of and that is heights. And spiders. But mostly heights and I gotta admit the Imax is fucking terrifying at first.

This was a good format to release Fantasia Part 2 in because I gotta be honest in a normal theater it would be fun but not nearly as impressive. According to my research they experiment with some technology and what not, using computer generated characters, coloring and effects. But for the most part the drawing still isn’t as impressive as the first one in my opinion. There is no consistency in the drawing style for the noah’s ark sequence, and Noah is not as noble as you expect for a biblical dude. Only the last sequence, the firebird, has the sense of awe inspiring spectacle that part 1 had with the dinosaurs and bald mountain.

Still, I would recommend fantasia part 2. It is not one of the better sequels however as a retread of the original it is a unique experience of artsmanship and music, not available anywhere else. Video or DVD could never recapture the magnificence of this theatrical experience, especially with the overwhelming visual and audio power of the Imax theater. And there is MUCH to admire here in my opinion – a colorful sequence based on the style of celebrity caricaturist Al Hirschfeld, the striking abstract triangles and firebird sequences, and even the weaker sections have subtle moments of acting or vivid, poetic images.

The whales are fuckin stupid though, jesus.

note: I don’t watch cartoons. the above review was written under duress

Disney
This entry was posted on Friday, December 31st, 1999 at 6:19 am and is filed under Cartoons and Shit, Family, Fantasy/Swords, Reviews. You can follow any responses to this entry through the RSS 2.0 feed. You can skip to the end and leave a response. Pinging is currently not allowed.