It almost seemed like a suicide mission for writer/director/editor Mike Flanagan (OCULUS, HUSH, GERALD’S GAME) to make a movie out of Doctor Sleep. How do you even make a sequel to one of the most unfuckwithable horror movies ever made – a fucking Stanley Kubrick movie – let alone try to please the author who famously hated the movie’s take on his very personal story about alcoholism? He tried to bridge the movie with the books, and I think he pulled it off!

It begins in Kubrickland. Re-creations of the guttural Wendy Carlos synths of doom, the iconic carpet design and bowl-cut Danny riding his Big Wheel down the halls of the Overlook tap into our residual feelings for Kubrick’s creation – to me it comes off more ballsy than cheap. Alex Essoe (PASSION PLAY, STARRY EYES) uncannily channels Shelley Duvall’s Wendy Torrance, who escaped her deranged husband and the haunted hotel with her psychic son Danny (Roger Dale Floyd). Carl Lumbly (M.A.N.T.I.S.) is inspired casting for Scatman Crothers’ Dick Hallorann, who continues to teach Danny about his abilities.

But quickly it shifts to the story of adult Danny (Ewan McGregor, HAYWIRE), who has inherited his father’s alcoholism and seems to use it to mute the visions of horrifying ghosts that have followed him since the Overlook. Rather than put him in THE SHINING 2 – making him lose his shit like his dad, or even putting him in a haunted building, or isolated location of any kind – it’s a totally different story that takes place largely on the road. And there are villains this time, a little tribe of slow-aging people apparently called The True Knot. They’re basically psychic vampires – rather than blood, they feed on the “steam” that emits from people with “the shining” if they die in fear and/or pain. They travel around in RVs tracking psychic kids to either murder for “food” or, if they seem useful enough, turn. 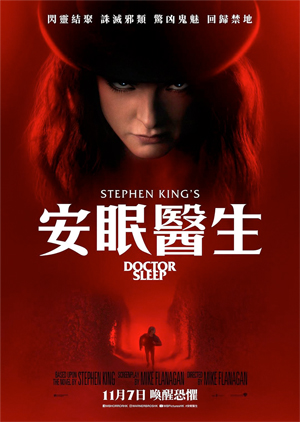 So they’re kinda like the outlaw vampire gang in NEAR DARK, but with less punk and more of a Romani vibe, especially in the case of Rose The Hat (Rebecca Ferguson, a.k.a. Ilsa Faust in MISSION: IMPOSSIBLEs ROGUE NATION and FALLOUT). Her man and co-leader Crow Daddy is played by Zahn McClarnon, who I‘ve loved since his rogue enforcer character Hanzee completely stole Fargo season 2. In things like BONE TOMAHAWK and BRAVEN I wished he could have a bigger character. Here he’s playing one of the main villains and he makes him seem like a good guy. His people are murdering children but he seems to be a really supportive partner and voice of calm and reason as Rose increasingly flips the fuck out.

She’s more outwardly evil – she opens the movie trapping one little girl, and later goes to war with another one, screaming at her, calling her a bitch. But she also has enough humanity that you can’t help but identify with her at times. In some of the movie’s big scare moments it’s Rose who’s being terrorized. And she does some mourning and some panicking as she realizes the world is getting rougher, her leadership is failing, and death has caught up with the creepy but sorta cuddly old giant Grampa Flick (Carel Struycken, TARZANA, THE PREY, EWOKS: BATTLE FOR ENDOR, THE WITCHES OF EASTWICK). All she can do is comfort him and make a speech about his great centuries of living.

Luckily in all their travels this crew never caught a whiff of Danny Lloyd. I guess the drinking was good for something. He only gets drawn into this whole mess after moving to a small town and meeting a good friend, Billy Freeman (Cliff Curtis, SIX DAYS SEVEN NIGHTS), who gets him into A.A. Clearing his head seems to open him up to communications from a pre-teen Shining pen pal, Abra (Kyliegh Curran). He sorta becomes her Dick Hallorann, except she’s way more active and adventurous with her powers than he was as a kid. One day she shows up at his work to tell him what she’s figured out about a missing kid (Jacob Tremblay, THE PREDATOR) and how they can catch the people responsible.

On the topic of true knots, I got a little little one in my stomach worrying about all the things that, when this is all over with, Danny might have to explain to somebody. “No officer, this is not my daughter who I traveled across multiple state lines with. Yes, she was the one who told me the location of the murdered child we dug up.”

I was pretty on board from the beginning, but it was as the psychic back and forth between Abra and Rose heated up that I realized I was loving it. And by that point I wasn’t thinking about Kubrick at all. The most noticeable part of the score by The Newton Brothers (SEE NO EVIL 2, ESCAPE PLAN 2 and all of Flanagan’s movies) is a frequent heartbeat thump, a little like Ennio Morricone’s theme to THE THING. And there are definitely some visual nods to THE SHINING – lots of slow dissolves, helicopter shots of cars driving down long winding roads, re-creations of specific sets – but mostly it looks like a Mike Flanagan film. I love the rotating rooms and floating bodies he uses to represent telepathic communications and astral projections. So much of this story is about people watching or speaking to each other mentally from across the country, and he finds perfect ways to visualize it.

By the time it returns to some SHINING stuff it feels like it’s earned it. And you’re kind of waiting for it to happen. It’s time for Danny to face this stuff like Laurie Strode in H20 when she locks the gate, gets the ax and yells for Michael.

I’ve been watching Flanagan’s The Haunting of Hill House series recently and god damn is that good. One of the best things I’ve seen in a long time. I like that this has a bunch of parallels, even if they all come from the source material: psychic kids, addiction related to ghost trauma, confronting/getting closure from a father (played by the same actor, although I didn’t realize it), being followed by the ghosts of a haunted place, and of course returning to confront the haunted place – which we see in both pristine and dilapidated form – as an adult.

By the way, I like when Rose blames a drought of strong psychic kids on distraction from phones and Netflix. The latter part is kind of an in-joke because Hill House and several of Flanagan’s movies are Netflix productions or exclusives, but I like the concept. Imagine, these people make it work for hundreds of years and then all the sudden they starve because of how addictive it is to get likes on Twitter and Instagram!

One part I remember laughing at in the 1997 SHINING mini-series scripted by King to be closer to his book was that at the end the ghost of Jack Torrance watches Danny graduate from high school like the ghost of Obi Wan Kenobi. Here that kind of stuff works, and it’s funny that it’s the actual Obi Wan Kenobi (prequel edition) playing Danny. His voice can appear in his young student’s mind like she’s Luke Skywalker trying to blow up the Death Star. Maybe that’s how he got the job.

(THEMATIC END SPOILERS) The title DOCTOR SLEEP comes from the nickname given to Danny when he’s working at a hospice, comforting a man about his impending death. This part seemed like a cool little tangent in the story to me, and afterwards I wondered why it’s significant enough to be the title. And I quickly made the connection that the movie ends with more Doctor Sleep – he’s taught Abra to teach her mom about life after death. We saw Danny’s childhood horribly scarred by violence – he lost his dad and his friend, he saw his dad turn on him and his mom, and he saw horrible visions of the dead that followed him home. After they managed to make it through all that he must’ve lost his mom young to some less visible violence like cancer. And still, after many years of self destruction, he’s able to dedicate his life to making people feel more positive about death.

We saw Rose take on the role too, but mostly the True Knot are the opposite of Doctor Sleep. They’re terrified by death. They spend their whole life on the road trying to stop it from ever coming. And that would be fine except they’re so addicted to living forever they’re willing to do it by snuffing out extraordinary promise-filled children who haven’t had a chance to live much yet. Not fair.

I think I kinda loved DOCTOR SLEEP. I will be making a follow-up appointment.

Alex Essoe Carel Struycken Carl Lumbly Cliff Curtis Ewan McGregor Jacob Tremblay Mike Flanagan Rebecca Ferguson Stephen King Zahn McClarnon
This entry was posted on Monday, November 11th, 2019 at 12:06 pm and is filed under Horror, Reviews. You can follow any responses to this entry through the RSS 2.0 feed. You can skip to the end and leave a response. Pinging is currently not allowed.