SHADOW MAN, I’m sorry to say, is the most boring movie Seagal has made so far. At least on my first viewing. To be fair, both THE FOREIGNER and THE PATRIOT seemed alot more fun the second time I watched them. In some ways maybe Seagal movies are like operas, you gotta understand the plot first before you can appreciate all the pageantry. But still, this is not one of my favorites.

(No, I’ve never seen an opera before, I’m just guessin.) 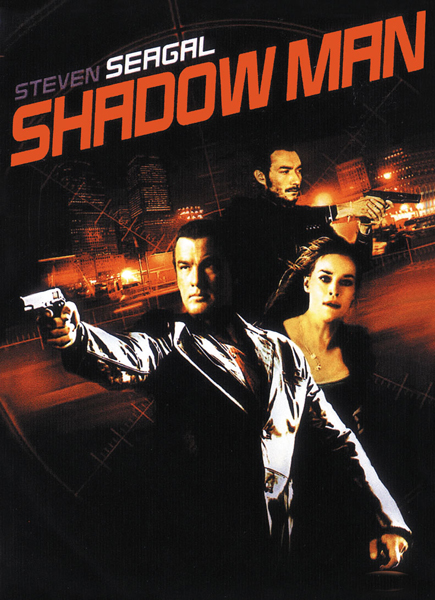 When they first announced this one it was called SHADOWS ON THE SUN, and it was supposedly gonna be something very different for Seagal, a drama where he’s a doctor working at a clinic in post World War II Japan. Now the movie comes out and it is not anything new for Seagal, he is not a doctor and he’s not in Japan or the past. The box says he has to save his kidnapped daughter AND stop a deadly virus, an exciting double whammy plot. But again, what we receive is not quite what we were promised. His daughter does get kidnapped, but by some lady that’s actually trying to protect her (don’t ask me to explain because I don’t really get it), and there is a deadly virus, only he just has to hide the blueprints from everybody. It’s not out there yet. He’s not gonna get to go up in a helicopter and toss it in the water like he did with the suitcase bomb in BLACK DAWN.

Why is the movie called SHADOW MAN? Good question. But it’s a question with no answer, like those riddles the zen guys collect. They don’t call him a Shadow Man in the movie. Nobody says “first you see a shadow, then you’re dead.” He’s just the usual ex-CIA aikido instructor type and his name is Jack. There is one thing that’s unusual though. He apparently runs a Fortune 500 company. I don’t know which one, or what this has to do with anything, but that’s what the CIA guys say in part of the movie. At least I think they’re talking about him, because I’m not sure who else they could be talking about.

It’s the same sort of overly complicated, not badass enough plot that Seagal usually does these days. Like SUBMERGED they mention MK-Ultra, although this time they pretend it’s a virus that gives you cancer instead of a mind control program. Also like SUBMERGED, we get to hear Seagal’s now familiar voice double. He’s not in there as extensively as in some of the movies, but the first time he shows up the opening credits are still rolling. So you know from the beginning it’s gonna be a bumpy ride.

SHADOW MAN definitely sets a new low for the use of doubles. Not stunt doubles, I’m talking about shots where “Seagal” opens a car door and things like that, which I’m pretty sure he can do safely without a stunt double. I guess they didn’t get all the shots they needed while Seagal was still on set. The funniest one is when Seagal and his female co-star come out of a building, only it’s not Seagal, it’s just some other dude with a ponytail and long coat. Okay so it’s not a closeup or anything but you can still clearly see this guy from the front. If I knew how to do screen grabs I’d show you, you’d get a good laugh out of it.

Another funny part that is turning into a reoccurring motif in Seagal’s DTV era, there’s a random sex scene where he’s with a much younger woman who drops her robe to show a big round ass, then he goes over and hugs her. You never see that girlfriend again but later there’s another scene where the female lead is in her underwear and he hugs her. He is turning into a serial hugger.

My favorite thing in the movie, and it’s nothing too special, is that Jack has a trademark move. It’s an aikido hit that causes a person to fly several feet back and hit a wall. He explains in his first scene that you can use it either on external organs or internal. To demonstrate the internal, he does it on a watermelon. One of his students says, “Sifu, I was very impressed with the way you broke the watermelon. Can you teach me? Can you give me a lesson?” And I thought, isn’t he already giving you a lesson? If not, what are you doing in his dojo listening to his lesson and wearing an aikido outfit? Is this only a coincidence? Are you just passing through on laundry day? Seagal rewards his dumb question by hitting him through a wall.

There’s other good bits too. He builds an elaborate MacGuyver type bomb. He pokes a guy’s eyes causing the guy to scream “My eyes!” and feel around on the floor for them. Also he kicks a guy in the nuts and then shoots him five times.

One thing that is notable is that the movie co-stars Imelda Staunton, Academy Award nominee for VERA DRAKE. She’s not the lead villain or anything but she is in multiple scenes as the Ambassador. She’s gotta be the most distinguished Seagal co-star since Michael Caine in ON DEADLY GROUND. I was surprised to see her name on the credits, and impressed. Not by the production’s casting coup, but by her willingness to follow up such a highly acclaimed performance with a Steven Seagal picture. I hope somebody told her that’s what it was. Because if so she must be cool.

Also, in one scene Seagal wears his reading glasses to examine a nano-chip. I think this is the first time he’s worn them on film. I saw him wear them while signing autographs, and like I said, he probaly uses them to examine samurai swords. Speaking of which, no swords in this movie. There is a reasonable amount of martial arts though, compared to SUBMERGED or something. There’s an extensive car chase but it’s pretty ridiculous, half of it is shots of Seagal and the woman he’s chasing making intense driving faces in front of an obvious greenscreen background.

Overall it’s watchable, but disappointing to this Seagalogist. Note to Joe Halpin, who seems to write all Seagal’s movies now: why don’t we try a simple plot next time? You look at the classics and they’re premises you can explain in one sentence. He gets framed and put in a coma, so he has to prove his innocence and kill the motherfuckers responsible. Terrorists take over a boat and he’s on it so he kills them off one by one. Terrorists take over a train and he’s on it so he kills them one by one. A dumbass from the neighborhood kills his partner so he tracks him down and kills him. Those are the types of plots you need for a Seagal movie, because the plot is the skeleton. It’s not the whole movie. You don’t need Seagal’s widow’s father is a rogue CIA agent who secretly plants a nano-chip on him and fakes his death in a car bombing but at the same time a taxi driver whose dad was in the CIA kidnaps Seagal’s daughter to keep her out of the way of the Russians who want to buy the deadly virus and Seagal has to team with a CIA guy he doesn’t trust who betrays him, but actually he likes Seagal and… whatever else happened in this movie. I honestly don’t remember anymore and didn’t catch it all in the first place. Because it’s too god damned complicated. If you spend all the time trying to explain that type of shit (or not explaining it and leaving everybody confused) there is no time for the actual star of the movie, which is Steven Seagal’s persona, his natural charisma, and his kicking of ass. You’re letting the plot get in the way of the movie.

My point is you want to make HARD TO KILL, not SYRIANA.

Think of it this way Joe. I used the blues analogy for slasher movies before but I think considering Thunderbox, etc. it is an appropriate analogy here too. A good blues song is not gonna be fancy and not even necessarily gonna be original. It’s gonna be classic.

It’s a simple, driving structure and then the master bluesman or action hero (Steven Seagal in both cases here) puts his stamp on it, his flourish. He plays a simple song but he plays the hell out of it. That’s what you want to see him do. You don’t want to see him play a fuckin Eddie Van Halen ten thousand note guitar jerkoff solo and start juggling.

Keep it simple, Joe. We can do this.

DTV Seagalogy
This entry was posted on Monday, June 19th, 2006 at 11:21 pm and is filed under Action, Reviews, Seagal, War. You can follow any responses to this entry through the RSS 2.0 feed. You can skip to the end and leave a response. Pinging is currently not allowed.