Seven months before the TV show though there was a pilot TV movie (fortunately included on the complete series DVD), which was pretty different and much more watchable. I can’t pretend it plays like a real movie – like the The Flash TV show of a few years earlier it is kinda sad to see a low budget TV crew in Vancouver try to compete with the incredible production design of Tim Burton’s BATMAN – but having recently watched those ROBOCOP TV shows I’m able to appreciate this for what it is: something that is way better than those ROBOCOP TV shows.
(And it’s hard not to think of ROBOCOP while watching the pilot, because it takes place in a place called Ocean City, so the police force are repeatedly referred to as the OCP.)

The screenplay is by Sam Hamm (BATMAN), from a story by Hamm and Sam Raimi, who also produces, cameos and brings along EVIL DEAD composer Joseph LoDuca for a theatrical-movie-worthy orchestral score.

In the pilot, M.A.N.T.I.S. has the muscle-suit with silver attachments like he has in the series, but he’s modest about it. He wears it under a suit, tie and trenchcoat, more of a classic Green Hornet look. Like in Hamm’s BATMAN screenplay, M.A.N.T.I.S. is already a practicing crimefighter at the beginning of the movie, and most people believe he’s an urban legend. He shows up to stop a bank robbery and his first appearance is effectively creepy: 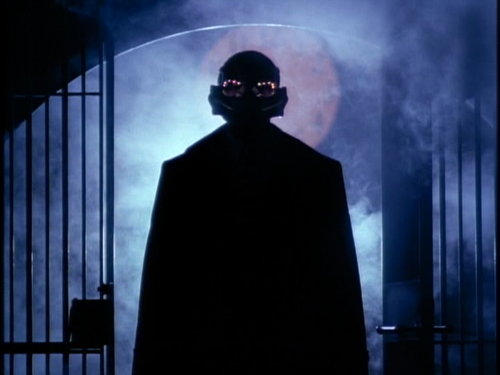 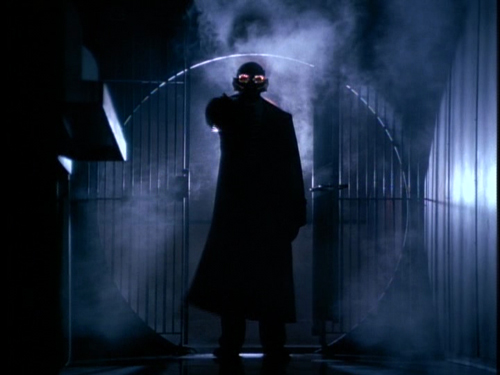 He’s a guy who appears out of nowhere, takes care of business and gets the fuck out, leaving behind legends instead of little cartoon dust clouds. His trademark is darts (shown in Raimi-style cutaway flying shots) and gas that temporarily freeze people like statues. He also has light-up eyes on his mask that can hypnotize people, and in one great scene he uses it to make a reporter suddenly go into a trance, say “This is M.A.N.T.I.S. speaking,” and deliver his message. That’s some badass shit! It makes more of an impression than sending an email. 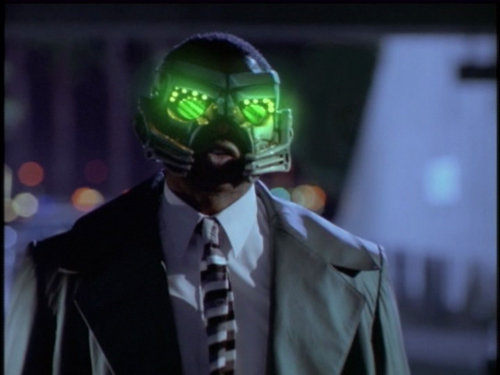 Like The Shadow or The Phantom he has a calling card – little gold praying mantises he leaves at the scene. So he takes the dramatics seriously. He wants to establish his brand.

The director of the pilot is Eric Laneuville, a.k.a. Richie from OMEGA MAN or Quincy from BLACK BELT JONES. So I didn’t even realize it while watching, but this is yet another young black actor who graduated into directing television shows. He’s still around, doing episodes of Blue Bloods, NCIS: Los Angeles, Grimm and The Mentalist.

While the series just seemed like color blind casting for the lead, the pilot is a sincere attempt to create a specifically African-American super hero story with a primarily black supporting cast. Hawkins is a black conservative who, pre-paralysis, disdains affirmative action in logic also used in another scene by racist coroner Philip Baker Hall to shut down onto-something underling and female lead Dr. Amy Ellis (Gina Torres from Firefly, the MATRIX sequels and Raimi-produced Cleopatra 2525). I suspect we’re supposed to believe that Hawkins is more liberal now, but whatever the case he is a respected rich guy who in his super hero identity helps maintain a gang truce and preaches to black youth to better themselves, saying “You’ve wasted your lives long enough, now you’re finally learning to live like human beings. Keep on learning – or I’ll be back.”

For those who could see this fresh it’s cleverly structured so that you might figure the wrong guy as M.A.N.T.I.S. His alter ego is not revealed until about halfway through, after making a big deal about Antoine Pike (America’s sidekick Steve James), who was once the founder of the 10Ks gang, now is a Jim Brown-type community do-gooder. Sounds like the type of background a TV show would give a black super hero, and Dr. Ellis thinks it’s him when she first witnesses M.A.N.T.I.S. in action, then sees Antoine doing gymnastics and martial arts. 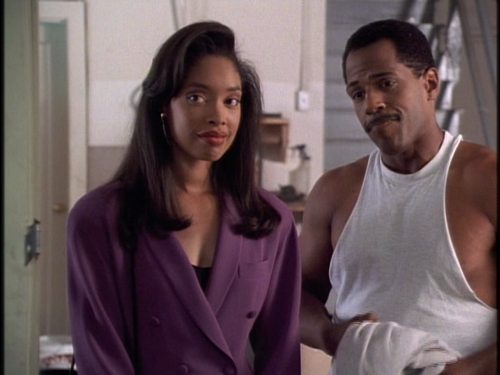 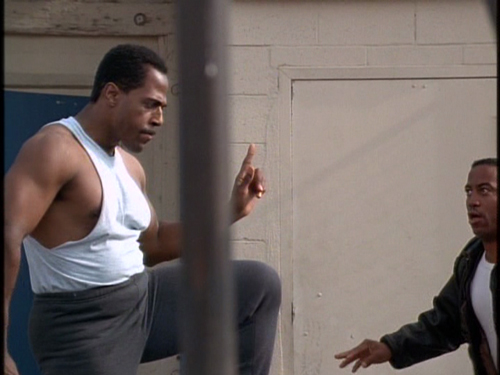 James would’ve made a good M.A.N.T.I.S., but he died of pancreatic cancer shortly before this aired, so maybe it’s for the best that it’s a trick and he’s actually conspiring with fascist white police chief Stark (Francis X. McCarthy, ACTION JACKSON) for shared control of the city.

M.A.N.T.I.S. has a little Afrocentrism (the costume is hidden inside an African statue, his assistants are Africans in native garb) and a little bit of black man swagger (his high tech jet thing, The Crysalid, transforms into a Cadillac).

His enemies aren’t openly racist, but I’ll be damned if Chief Stark isn’t using coded language when he talks about the city being “held hostage by a terrorist minority.”

There are alot of little things in the movie that remind me of DARKMAN. Darkman only has 99 minutes to wear his liquid skin before it melts, M.A.N.T.I.S. can only wear his suit for a certain amount of time before it starts to hurt him. Darkman has a big stunt where he’s hanging from the cable on the bottom of a helicopter, M.A.N.T.I.S. one-ups him by purposely hanging off the bottom of his flying Cadillac to battle rollerblading purse-snatchers during “The Gridlock Riot.” Both end with the bad guy bringing the love interest to the top of a building, but this one is about a hundred stories shorter than the one in DARKMAN.

One great thing about skipping the origin: it’s thrilling to see M.A.N.T.I.S. suddenly dive his ship into the water and into his underwater base. It’s much better to have a casual reveal of “The Seapod” then see him build it.

Like so many super hero or general vigilante stories there’s an attempt to deal with the ethics of somebody doing this sort of thing. Stark’s paramilitary police tactics are rightfully compared to martial law and fascism, but a rich guy doing the same thing is not. I guess maybe the idea is that in a world where the cops do shit like that there needs to be somebody to balance out the equation, to reveal and fight their corrupt activities. 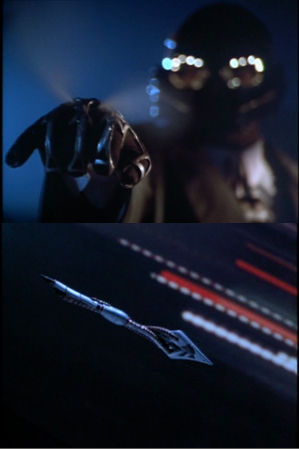 Also it should be noted that M.A.N.T.I.S. only works non-lethal. When police helicopters attack his ship he explains to Dr. Ellis that he can’t fight back because “I don’t have any offensive weapons. It’s a philosophical thing.” Interestingly, Hamm’s Batman had guns on his vehicles, even though that character is traditionally portrayed as refusing to use guns. Maybe Hamm regretted that and wanted to make up for it.

Cheesy as it is I really enjoyed this pilot movie. It’s got a good balance of sincerity and absurdity, it’s honestly a pretty cool super hero concept portrayed effectively by Lumbly, it’s big-hearted in its attempt to create a black super hero, it’s cool to see James in such a central role, it’s cleverly structured, LoDuca’s great score gives it a more operatic feel than seems possible, and most of all the action scenes are full of fun gimmicks and a zippy sort of energy that makes me wonder if Raimi did uncredited second unit work. It seems like a good start to what could be a really fun show. Look at this fuckin guy: 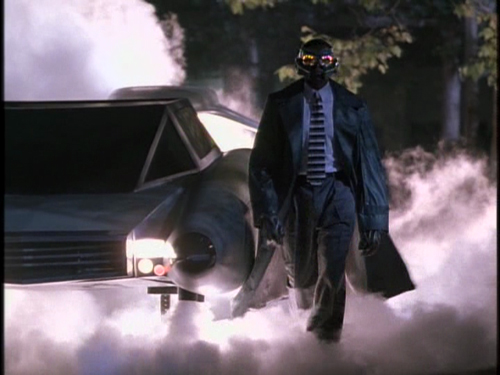 He’s even strutting. That’s a cool motherfucker right there. And nobody would ever guess it was Miles Hawkins, because Miles Hawkins can’t even walk. It’s a much better cover than Clark Kent’s glasses.

Unfortunately the show is not as good as the movie. For the series version they retooled the whole thing. Ocean City becomes Port Columbia, he loses the African assistants and decorations, Gina Torres does not return, he works mostly with white people. Most of that wouldn’t matter if they could maintain and build on the same sort of feel, but the show is completely lifeless. The stories of the week are generic tv shit and they spend most of each episode with quiet talking scenes and very little actual M.A.N.T.I.S.

They don’t seem like they’re trying to be BATMAN or DARKMAN anymore, or even Knight Rider. You won’t see M.A.N.T.I.S. hanging off his ship, you will see him going to the community center to talk to the lady at the desk and get a tour and hear about all the problems they have and stuff.

But I did go through alot of the episodes and here are a few highlights.

Barry Pepper shows up in one: 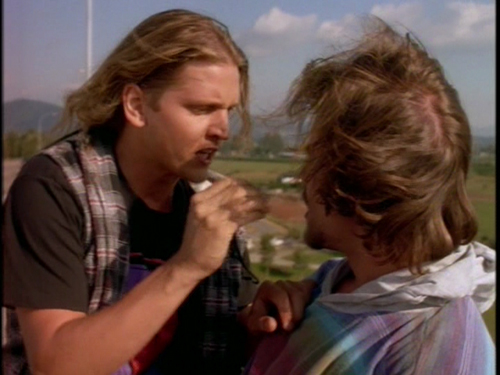 In a rare episode with a bunch of fighting, M.A.N.T.I.S. intervenes in a cage fight against the guy who played Jesse Ventura in the shitty TV movie: 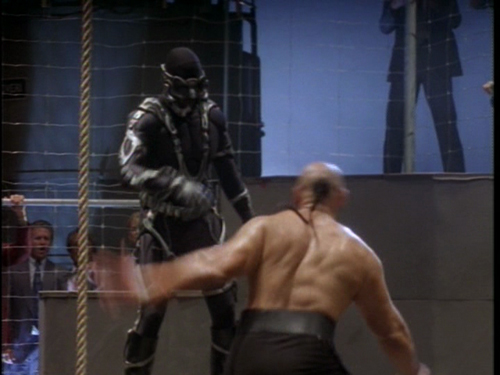 And there were these men in black guys who look like the Winter Brothers crossed with Roy Orbison: 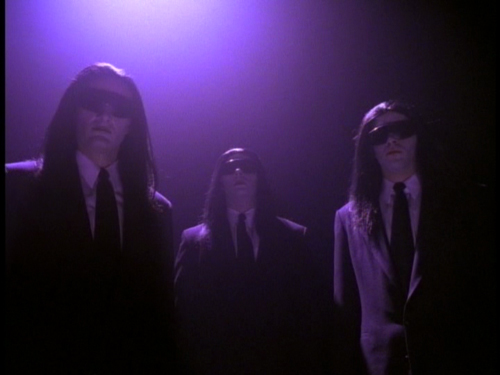 Episode 13, “The Eyes Beyond,” is the point when they realized the show was failing and tried to change course. (unjumping the shark?) In this one M.A.N.T.I.S. is flying his ship and accidentally goes into a time portal that takes him to a post-apocalyptic future where the city is controlled by “The Eye,” a talking A.I. supercomputer who sees the world from basketball-sized light up eyeballs that are all around the city and even carried by human servants. Unfortunately he does not go back in time to when he wore clothes and mostly black friends.

At least they knew the show was ending, so they were able to have the last episode wrap up the M.A.N.T.I.S. story the only way it could: he’s out in the woods with a redneck hunter guy and he and his girlfriend decide they have to blow themselves up in a truck to kill an invisible t-rex so after he’s dead his white friend finishes his audio log, seals up The Seapod and leaves for “the Orient.” End of series.

I cannot in good conscience tell you to watch the show, but maybe check out the pilot movie sometime, it’s pretty cool. I enjoyed it, anyway.

Carl Lumbly Eric Laneuville Gina Torres Philip Baker Hall Sam Hamm Sam Raimi Steve James
This entry was posted on Sunday, March 16th, 2014 at 10:35 pm and is filed under Comic strips/Super heroes, Reviews. You can follow any responses to this entry through the RSS 2.0 feed. You can skip to the end and leave a response. Pinging is currently not allowed.