When he wakes up he wanders and finds a carnival with a sideshow. That’s where he sees this winged lady. Not riding a ferris wheel – she’s in the sideshow, because she has wings. Not sure if you got that.

Later he comes to her in her trailer and convinces her to let him hang out a while. He’s really impressed by what he calls her angel wings, but she says “I’m not an angel, I’m a bird-woman.”

When the jealous ringmaster dude (Rhys Ifans) sees Mickey around he thinks this hep cat is trying to steal his bird-woman. He’s about to have Mickey killed via-snakebite when she drives a truck through his trailer and saves him “come with me if you want to live” TERMINATOR style. Next thing you know they’re on the run together.

Keep in mind, though, by “running” I mostly mean sitting around looking sad, or talking on gas station pay phones. This is not a very eventful movie. It’s low budget and minimalistic, like a weird indie arthouse movie from the ’80s or ’90s except with some phony looking greenscreening here and there. There’s even a greenscreen rooftop set but I don’t think it’s the same one from THE ROOM or the one from NINJA. There are just alot of these greenscreen rooftop sets around to rent out to low budget movies, I guess.

The whole thing is very dreamlike, but a little on the cheap side. I guess that guy Christopher Doyle shot it, so some of it looks nice, but it’s probly not his proudest achievement. One thing that bothered me is that they didn’t seem to try to make it seem like Rourke is really playing the trumpet. The sound mix just makes it seem like he’s pretending to play along with a record.

One random casting note before we move on: there’s a tough-looking enforcer that Mickey has to deal with, when I saw him I thought who is that, I know that guy. Kinda looks like Michael Rooker, but who is that? For some reason it didn’t connect that that was retired UFC badass Chuck Liddell.

So that’s The Iceman working for Bill Murray. It’s weird to see Murray playing a cruel bastard crime lord that everybody’s afraid of. I guess he pretty much always plays an asshole, but usually he’s supposed to be lovable. Here he has people killed, including his wife. He’s supposed to be scary. But a little bit sad, despite the name. Murray brings his usual sarcasm and open bitterness to the role, but mostly I don’t think they’re going for laughs.

It’s a humorless movie, but when it reaches the inevitable poetic climax (she flies away to freedom [SPOILER]) the effects are so goofy that it does not have the same emotional impact I think they were looking for. They might as well have done a little stop motion doll or something, at least have some style with their laughs.

But I don’t wanna be too harsh on PASSION PLAY. It’s already been picked on and I don’t really think it’s for entirely fair reasons. Look at the cycle of Megan Fox: she’s this hot piece of ass with no character or acting in the TRANSFORMERS movies, but all the magazines and websights think she must be the next big thing so they do cover stories and interviews and she’s in all the gossip and they leak photos of her wearing skimpy outfits on the shitty movies she can get into with her beginning actor skills (this, JONAH HEX). But those movies don’t do well so the “next big thing” thing doesn’t really pan out and then those same media sources are over her and their attitude becomes who is this bitch, she thinks she can act just ’cause she has tits? Who told her she could do that, wasn’t me I don’t think I said anything like that when interviewing her for our cover story on her. I have no choice but to either write about someone more worthy or – and this is the one I’m leaning towards – to keep writing about her all the time but in an attempt to humiliate her!

I sense a little bit of that anyway. I’m not saying she’s that great in this, but she’s better than in the TRANSFORMERS movies. She gets to try at least. And Rourke has a pretty stupid character, but throws his soul into it like he always does. The few redeeming qualities the character has come from the passion in his performance. (That’s not a pun, by the way, it’s just a word I need to use that happens to also be in the title and I refuse to compromise my wording out of wordplayphobia.)

The biggest target, actually, is the wings. If this didn’t have this magical realism angle everybody would be fine. It would just be another worthless indie drama nobody ever heard of. But because there’s some weirdness in it people act like that makes it worse. They’ll focus on the wings as being the reason why it’s bad.

That’s not the reason. It’s bad because it’s not a well thought out story, the characters are not very interesting, nothing much happens and the visuals and timing are lifeless. The wings are a plus, I don’t think I could’ve finished it if she didn’t have wings. At least with this we can dream about these two lovebirds going off, building a nest, hatching some crazy eggs together.

But I guess normal people hate interesting stuff, so that’s the main thing they shit on. The marketing people realized this, so the posters and the screener cover don’t show the wings at all. In fact the screener has stills from the movie all over the back and the inside, but none of them show the wings, and the plot description doesn’t mention them. These things are always funny, they’re always stretching it in the ways they try to make any random shitty movie sound like a must-buy for your video store. That’s another thing that’ll go down with the mom and pop stores, the art of the ridiculous screener claim. For example this mathematical formula: 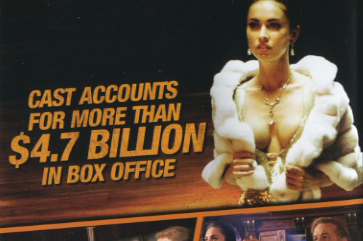 See? PASSION PLAY is a sure hit because it’s related to the combined box office totals of the TRANSFORMERS movies, IRON MAN 2, the GHOSTBUSTERS movies, the GARFIELD movies, and, you know, the one where he’s with the elephant.

Also, this is just my personal opinion but it seems to me like this claim here is hard to back up: 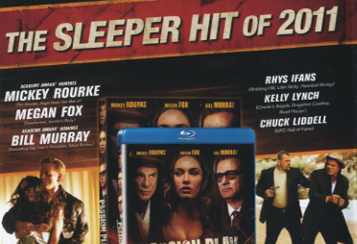 But I guess since as of this writing it hasn’t come out yet it could still be a surprise smash.

The director is Mitch Glazer, who not surprisingly hasn’t directed a movie before. But he grew up friends with Rourke and must know Murray from his days as writing partner to Michael O’Donoghue (they did MR. MIKE’S MONDO VIDEO, Saturday Night Live and SCROOGED together). And he’s married to Kelly ROAD HOUSE Lynch, who’s in there too.

Glazer should probly stick to the writing, but I can’t fault him for giving it a shot and calling in favors. Maybe some day somebody else will make the definitive Mickey Rourke/Megan Fox bird-woman love story. Until then we have this.

Bill Murray Chuck Liddell Kelly Lynch magical realism Megan Fox Mickey Rourke Mitch Glazer Rhys Ifans
This entry was posted on Friday, April 29th, 2011 at 2:22 am and is filed under Drama, Reviews. You can follow any responses to this entry through the RSS 2.0 feed. You can skip to the end and leave a response. Pinging is currently not allowed.