Donnie Yen is THE LOST BLADESMAN. Not THE LAST BLADESMAN, that would be different. That would be a white guy. No, he’s the Lost Bladesman, and not lost in the sense of “oh shit, where the fuck am I? I could’ve sworn this trail went back to the river. Am I going in circles now?” but more, I think, in the sense of “I have lost track of my purpose in this world.”

See, he’s General Guan of the Three Kingdoms Era. I had to go back and check my handy RED CLIFF chart to remember, but Guan was one of the two generals working under Lui Bei to stand on the cliff and face the much larger army and navy of Cao Cao. He’s not the human battering ram with the eyebrows, he’s the other one.

This story takes place before RED CLIFF in my opinion. Guan has been captured by Cao Cao. Cao Cao tries to get him to join his side, but says if he decides he wants to leave then nobody will stop him. So he leaves, and everywhere he goes people try to stop him. Of course he’s Donnie Yen, so he takes on alot of people at once, and handles them. From his and our perspective he’s just defending himself from the people who attack him, but to other people it looks like he’s on a killing spree. 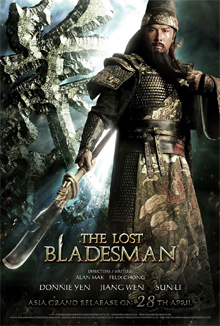 The reason he’s lost, though, is because he doesn’t want to fight anymore. He just wants to be a humble farmer. He makes deals to kill guys for Cao Cao, but only when he believes it will cause peace or prevent a much larger number of deaths. He hates violence, and that’s something that’s hard to deal with when you’re really, really good at violence. It’s one of my favorite types of asskickers: the aspiring pacifist.

The reason he’s a bladesman is because he’s really good with one of those spears that have a big fat sword on the end. He also uses regular swords, but it’s cool that the spear thing is his main weapon.

There are several good action scenes. The opening has epic warfare with armies, arrows, battering rams and all that. It has a nice look to it, solid primary colors on some of the banners and stuff jump out in the middle of otherwise washed out colors. But pretty real looking, not slick and digital.

The rest of the action is more personal, the bladesman in very intimate conflicts with a mere 10-50 warriors at a time. I like when he’s running through the woods and there’s a bow and arrow sniper in the trees above. Or the horse chase through a walkway where he scrapes his blade along the top of the wall to knock tiles all over the guy that’s chasing him. Then they stop and duel, but the place is so narrow that their blades keep hitting the walls. Kinda like that fight in the mobile home in RAISING ARIZONA when he scrapes his knuckles on the textured ceiling.

But the most memorable fight in the movie is definitely the one you don’t see. He’s surrounded by a bunch of guys, and some doors swing closed in front of the camera. We hear a brawl and glimpse movement in the crack between the doors, and when they open again Guan is standing there surrounded by dead bodies. I bet some people will be mad they don’t get to see it, but I think the cleverness of the leave-it-to-your-imagination staging beats whatever they could’ve shown.

But this isn’t wall-to-wall action, it’s alot of talking and melodrama, philosophical disagreements and lamenting about forbidden love. I like it, but I don’t think it translates as well as the best of this type. It would probly be better if I had an understanding of these historical events and figures, ’cause I think it might be trying to show a different angle on Guan and Cao Cao, and that’s hard to follow if you don’t know the previous angle. But it’s an interesting polite enemy type of relationship between the two.

The movie is written and directed by Felix Chong and Alan Mak, (DEPARTED ORIGINS: INFERNAL AFFAIRS). I liked it better than their last Donnie Yen joint, LEGEND OF THE FIST. That one had some good action but lost me with its tired masked vigilante angle, and if this one is as blatant about being Chinese government propaganda then I was too ignorant of history to decode it.

This is definitely no RED CLIFF, but it’s fun, and will probly help to re-popularize that spear/sword weapon thing. I’m not somebody who picks up alot of these gadgets like smart phones, book replacers, etc. but that seems like a useful one to have around.

Alan Mak Donny Yen Felix Chong Three Kingdoms Era
This entry was posted on Friday, August 26th, 2011 at 7:19 pm and is filed under Action, Martial Arts, Reviews. You can follow any responses to this entry through the RSS 2.0 feed. You can skip to the end and leave a response. Pinging is currently not allowed.

24 Responses to “The Lost Bladesman”