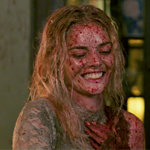 They challenge her to a game of hide and seek. If she can stay away from them until dawn, she wins. She laughs and doesn’t take it seriously until she realizes they’re taking it very seriously. Like, trying to kill her seriously.

They’re not the hunters in HARD TARGET, they’re just standard rich people, so they’re not experienced killers. They do the ritual for every new family member, but which game they play is chosen at random, and only when hide and seek is drawn is there any violence. It’s the Russian roulette part of a Faustian bargain their relative made with somebody they call Mr. Le Bail. They believe in it, they’ll do it, but they’re terrible at shooting old guns and crossbows, so there are some misses and some friendly fire incidents. And Grace is able to put up a fight.

There’s a theme of family bonds. Grace doesn’t have a family, and is anxious to find one.
Alex has been estranged from his for some time, but is trying to make peace for the wedding. He seems closest to his brother Daniel (Adam Brody, George Miller’s JUSTICE LEAGUE MORTAL, MR. & MRS. SMITH), but there’s some tension about him having been left behind. Both try to warn Grace and give her a chance to “opt out” of the family, but of course she doesn’t read the “there is a secret ritual we haven’t told you about where we might have to kill you” part between the lines. Alex was betting on a harmless game being called, but now that shit got real he tries to help Grace, and the family locks him up. Daniel also shows some sympathy, and is torn about which side he’s on. I found myself rooting for him to help her, not because I felt she needed his help, but because I liked him and didn’t want her to have to kill him. 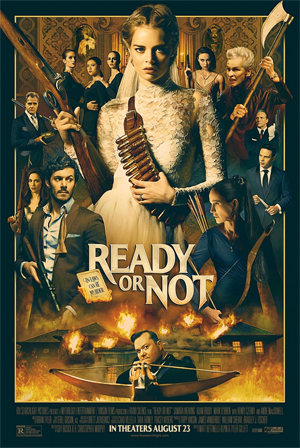 It’s an all around enjoyable movie, but its biggest strength is definitely Weaving, who deftly handles the duties of a John McClane or a final girl (getting increasingly bloody, beaten and dirty, but fighting to the end and getting away by the skin of her teeth) while being completely charming. In this sense it reminds me of HAPPY DEATH DAY, a movie with a high level of cleverness that’s still completely overshadowed by the magnetism of its great lead. And though Grace lacks Tree’s quality of being a fun-to-watch asshole, she is a novel horror heroine in that she gets to be funny. Not just be in funny situations (though there are plenty of those) – she also makes good jokes. She’s witty. This isn’t something we see often. Even in SCREAM, Sidney had to be the serious one.

Understandably, the filmmakers keep Grace in her wedding clothes the whole time, but she doesn’t let the cool thematic imagery be a hindrance. She switches to Converse, tears off the bottom of the dress, uses a sleeve to bandage a wound, uses the sash to strangle somebody, adds a bandolier. (We may see this inspire a Halloween costume or two this year.)

The best joke in the movie is the upper class version of the HALLOWEEN neighbors-turn-the-lights-off-and-pretend-not-to-be-home scene. Grace badly wounds herself to squeeze through an opening in the wrought iron fence and runs out into the street to wave down a passing sports car… but the driver yells at her to get out of the road and takes off. Her subsequent tirade about “fucking rich people” is exquisite.

Said fucking rich people are a pretty easy target for light satire, but I think the premise plays it just right. This is a family passing down enormous wealth through generations. Some of them are jerks, one is a coke addict, none of them seem to be doing anything great for humanity, but they do have to make sacrifices. Literally. They’re in a situation where sometimes they have to kill an innocent person – a loved one even – to survive. (Also some goats, apparently?) It’s an old fucked up family tradition and it does seem like the younger ones are cooler and more questioning of it. And yet… they need to “protect their family.” Even a little kid gets in on the violence, and they never tell him to. He’s supposed to be in bed. But he follows their lead. He does what his family does.

Becky (Andie MacDowell, MAGIC MIKE XXL), the mother, genuinely likes Grace, and before the wedding tries to make her feel comfortable about not coming from a rich family. She’s not from money either. Despite this background and these feelings she adapts and commits to the fucked up Le Domas ways. She’s willing to put aside her personal feelings for their satanic pact.

As different as it is, READY OR NOT kind of mirrors some of the themes of THE TEXAS CHAIN SAW MASSACRE. They’re passing down this cruelty from generation to generation, they protect the family above all else, they fear outsiders. And from Grace’s perspective she’s trespassing in the world of these ultra-rich mansion dwellers. There’s a shot of Grace captured that I’m sure is a reference to Sally being bound and gagged at the beginning of the dinner scene. And I don’t know if this is intentional, but there’s another part that looks very similar to when Leatherface chases Sally through the brush at night. But instead of a chain saw on her ass it’s a limo!

Directors Matt Bettinelli-Olpin & Tyler Gillett previously directed DEVIL’S DUE and segments of V/H/S and SOUTHBOUND. The script is credited to Guy Busick & R. Christopher Murphy (story credit on URGE starring Pierce Brosnan). But now they’ll be known as the guys who did READY OR NOT.

Google informs me that Business Insider called READY OR NOT “the surprise hit of the summer,” and I’ve seen stories about what the filmatists think a sequel could be about. I’m not sure that’s necessary, but it would definitely be cool to see more movies, possibly of this tone, starring Weaving.

For those who have seen it, let’s discuss how great it is when she’s trying to escape through the barn and runs into one of the little kids in the family, and her immediate thought is to protect him from what’s going on, to prevent him from being traumatized by it. But he pulls out a gun and shoots, blowing a hole right through her left hand. Isn’t it beautiful that she then punches him in the face and sends him flying like a bowling pin? It’s the ol’ ORPHAN move, where they find a way for us to laugh at an adult punching a kid, and then laugh that we laughed. The scene was worth it just for that, but then she falls through that cellar trap door thing and dangles from one hand and there’s a big ol’ nail sticking out and it leaves us in nervous suspense as to whether Grace, and the movie itself, will have the mettle to plop that hand-hole over the nail and hook on. And god damn it they both pass the test! I’ve seen alot of these movies with miraculously healing hand-holes (see LEATHERFACE: THE TEXAS CHAINSAW MASSACRE III post railroad-spiking) but I’ve never seen one where the hole is used as a tool. I love it.

P.P.S. ANOTHER SPOILER ABOUT THE ENDING

I love the way it plays with whether or not the curse is a real thing. I was leaning toward it being true, because it would be a convenient but entertaining way to get her out of this mess. And it works. But I like that they also gave us that awkward minute or so of the family having to face the idea that maybe they’ve been doing this crazy shit for generations based on an empty superstition.

Adam Brody Andie MacDowell Guy Busick Mark O'Brien Matt Bettinelli-Olpin R. Christopher Murphy Samara Weaving Tyler Gillett
This entry was posted on Monday, September 9th, 2019 at 11:24 am and is filed under Comedy/Laffs, Horror, Reviews. You can follow any responses to this entry through the RSS 2.0 feed. You can skip to the end and leave a response. Pinging is currently not allowed.

22 Responses to “Ready or Not”