I’m not familiar with Dave Bautista’s work as a WWE Superstar™, but I thought he was cool in a supporting role in my old internet pal “Demon” Dave DeFalco’s action movie WRONG SIDE OF TOWN. So when I saw he had a starring role in this movie (which credits DeFalco as an executive producer) I was sure to check it out. And I was surprised, especially watching it immediately after TACTICAL FORCE, at its level of quality. There are some issues, for sure, but it’s a serious crime drama adapted from a novel, not some shitty excuse to bring him from wrestling scene to shootout to wrestling scene. It’s a pretty decent story, actually.

Bautista plays Ray Shane, head of security at an illegal casino and brothel in Grand Rapids. He used to be a cop, but a bunch of them were on the take and he took the fall for it, did 5 years. One night one of his guys is not at his post, he watches the door for the guy and some armed gunmen get the drop on him. Not only does he lose a bunch of the club’s money, but the boss’s son gets shot and killed. So the boss decides that it’s Ray’s responsibility to use the skills he learned as a detective to get the money back and catch the killer. It’s kind of a noir mystery type deal: somebody’s trying to set him up, he uses his old connections to find leads, he follows the trail of clues, etc.

It’s kind of a Schwarzenegger role in a way. Other than his troubled situation he’s a pretty regular guy who just happens to be a giant muscleman. He’s not a super criminal or elite warrior. He gets into some scuffles but doesn’t bust out the wrestling moves much. When he starts questioning people they keep saying he looks like a cop, and I always thought “I never seen a cop like that.” Looks more like a barbarian to me. (I guess that’s why he’s gonna be in the next SCORPION KING movie. Too bad it’s not as the Scorpion King.)

There’s a good scene where he kind of forces his way into a guy’s house to ask him questions and it takes a little bit for the guy to understand that he’s not a cop and then start fighting him.

Dominic Purcell (Dracula from BLADE III) is one of the guys he works for, Amy Smart (Felicity) is his ex-girlfriend, Danny Trejo is another crime boss. It’s not the best type of role for Trejo because he’s just a slick kingpin guy, it could be played by plenty of actors who lack Trejo’s particular look and presence. And it’s a small part too, but it’s a pivotal character at least.

There’s nothing very original about any of this, but it has some novelistic detail to it, some nice man-to-man conversations, it’s not your typical DTV mob stuff. I really like that Ray Shane is not a shoot-first-ask-questions-later type who always wins. No, he knows he’s in deep shit, and he goes after these big shots to plead his case, explain what really happened, try to convince them. It’s not at all a typical role for an ex-wrestler. If I had the means this is how I’d reward him: 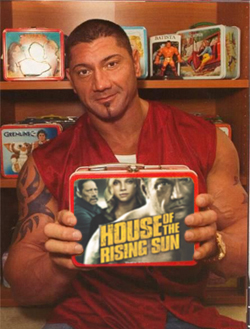 Of course the cover shows him shirtless with a gun, as if he just goes around in public wearing his wrestling gear. Actually he wears winter clothes for most of the movie so it seems kind of out of place the one time you see his shirt off and all his ink. I’m not sure the character would really have that style of tattoos.

Amy Smart’s role is a little thin. For a while she’s just the slightly crazed ex-girlfriend ho. And she’s not as good as she usually is. It kinda seems like she didn’t like the character and didn’t put too much effort into it. But what happens with her character surprised me. I thought I knew what she was up to but I was wrong.

My biggest problem with the movie is the music. There’s a whole bunch of rock songs, many of them with corny lyrics about the government being after you and shit that doesn’t really seem to have anything to do with the movie. This is really the only thing about the movie that seems maybe designed for the wrestling fan demographic that Bautista would appeal to. I know it’s a personal taste thing but I really feel like a more retro type soundtrack works better with these crime movies. But I guess just because you’re filming in Michigan doesn’t mean you can afford Motown songs on your soundtrack.

But it does have snow in it. It’s kind of hard to have snow in a low budget movie. Good job on the snow, fellas. It doesn’t look like they tried to, it just happened to snow while they were filming and they got the continuity to work.

It really is based on a book by a guy named Chuck Hustmyre, who has done a bunch of well reviewed books. But the Amazon description says the book takes place in New Orleans. I guess the tax breaks in Michigan were better than the ones in New Orleans. Also from the description I learned that the name of the club where everything went down is The House of the Rising Sun, so that explains the title. I was wondering ’cause I didn’t notice anything Japanese in the movie.

This isn’t really good enough to put on a list of new DTV classics, but I think it’s an interesting and surprisingly solid entry in the history of movies starring former wrestlers, and I think it speaks well for Bautista’s potential as an actor and/or movie star. I’m sure there was easier and more obvious material he could’ve gotten involved with, he must have interesting tastes if this is what he chose. Good job Demon Dave if you helped steer him toward this one.

Amy Smart Danny Trejo Dave Bautista David DeFalco Dominic Purcell DTV
This entry was posted on Tuesday, August 30th, 2011 at 2:25 am and is filed under Crime, Reviews. You can follow any responses to this entry through the RSS 2.0 feed. You can skip to the end and leave a response. Pinging is currently not allowed.

25 Responses to “House of the Rising Sun”