1. Isaac Florentine. The Israeli martial artist turned filmatist is the only reliable DTV auteur I know of. His movies usually have a fun tone and always have great, well-staged fights with energetic camera movements (and sound effects whenever somebody moves their arm or turns their head). He’s made distinctive vehicles for Dolph (BRIDGE OF DRAGONS), Michael Jai White (UNDISPUTED II) and Van Damme (THE SHEPHERD: BORDER PATROL – although he disowned that one. But I liked it.). 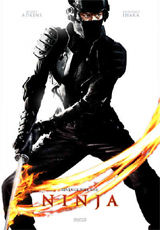 2. Scott Adkins. The British martial artist who was stunt double for Ryan Reynolds in WOLVERINE and also took over as Weapon XI (it wasn’t his fault) has been stealing movies from his co-stars for a while now, especially in Florentine’s movies like SPECIAL FORCES, THE SHEPHERD and UNDISPUTED II. It’s about time he moved up to the starring role.

In NINJ* Adkins plays a ninja who does ninja stuff, sometimes against other ninjas, etc. To be more specific, he plays Casey, an orphan raised in a dojo in Japan that teaches an honorable form of ninjitsu. Casey is clearly sensei’s pet so Masazuka (Tsuyoshi Ihara, LETTERS FROM IWO JIMA) is bitterly jealous and gives him shit about his deadbeat parents and lack of proud Japanese heritage and what not. While sparring, Masazuka loses his shit and throws his sword at Casey, so he’s banished from the dojo where he’s lived his whole life.

This scene could be really routine, but instead it’s full of emotion and ambiguity. Masuzuka is heartbroken, he can’t believe his sensei would be so harsh. He doesn’t lash out, he falls to his knees begging and crying. Casey just stands in the background, stone-faced. I kept wondering why he doesn’t say something, ask the sensei not to banish him. Is it because he agrees with the punishment? Because he knows he has no say in it? I think by keeping his mouth shut, by not stepping out of place or showing emotion, he’s trying to be more Japanese. Ironically, if he would’ve been more American in this one instance then it might’ve smoothed over their feud a little. But since he does nothing there’s no turning back – the ninja war is on.

“Some time later” there’s some sort of ninja graduation going on at the dojo, and Masuzuka shows up without an invitation. He seems totally different, a cocky outsider, having become a big time assassin. He wears a cool leather jacket, like a former nerd showing off a the high school reunion. He threatens everybody and the sensei realizes it’s time to hide “the Yoroi Bitsu,” a box full of antique ninja weapons that represents his school. He knows Masuzuka is gonna try to get it, so he sends it to New York along with Casey and some others to guard it. Basically, it’s an old box taking part in the Ninja Protection Program.

And then the story is about Casey and this bad ninja fighting over the weapons in fake New York City. I like that the story is very simple and compact (it’s only 86 minutes long) and I like that it’s all about this box of weapons. You know, there’s a girl that gets kidnapped and everything but for the most part the motivation seems to be the stubborn protection of a box of swords and shit. I like that the movie never questions whether it’s worth it.

The character of Casey isn’t a real detailed or memorable one, but his simple backstory redeems it for being yet another white ninja movie. In Japan Masazuka ridicules Casey for not having parents. In New York Casey tries to locate his birth mother, but finds out she died. Those two small scenes give meaning to the ending, when he defeats Masazuka (SPOILER). Basically they are brothers, both orphans with the same father figure. But although he is racially an outsider Casey is more true to the ideals and traditions of their father. He earns his place in the family.

The story is very streamlined, but there’s room for a few bits of flare. One great one is The Temple, the secondary bad guys. They’re this oil conglomerate that hires Masazuka to assassinate the competition, but they’re also some kind of satanic cult who do rituals in robes and brand a symbol onto their chests. They’re mostly just set up briefly in order to be robed enemies in a big fight scene, so it’s an enjoyably absurd touch that doesn’t outstay its welcome.

Before NINJA ASSASSIN came out I was convinced that these two would start a resurgence of ninja movies. But NINJA ASSASSIN turned out to not be good enough to be noticed. I liked it more than most, but it wasn’t the instant classic I was hoping for, and although it had the bigger budget and the presence of Sho Kosugi I do think NINJ* turned out to be the better movie. Its fights are better. Maybe or maybe not in choreography, but definitely in the way they’re put on screen. No closeups or quick cuts that confuse what’s going on, because Florentine is all about showcasing his great fighters.

It’s kind of funny, they do end up having alot of similarities. Both take place split between a Japanese dojo stuck hundreds or thousands of years in the past and modern cities. Both have rival ninjas, orphans raised in the same clan. Both have cops trying to uncover an assasination ring (thankfully this one has less emphasis on that). Both have the hero captured by the authorities and then escaping when the lights go out and the bad guy attacks. NINJA ASS. has a cool scene of ninjas fighting in traffic, NINJ* isn’t as epic but it does have 2 different scenes of jumping over moving cars (for real). Both have CGI blood, but N.A. goes for an over-the-top and stylized approach while NINJ* is a little more realistic. N.A. uses tons of CGI weapons, NINJ* has one part with a digital effect on a sword to make it look weird.

But NINJ* is a little more pure example of the genre. It uses the full range of ninja weapons: swords, bow staffs, nunchakas, arrows, throwing stars, poisoned blow darts, antidotes, a smoke bomb. It has the sensei trying to defeat someone in the dark by closing his eyes and listening. The hero doesn’t wear a ninja costume the whole time, but the villain does often wear high tech ninja armor with night vision goggles. Sometimes he’s out of costume though, but uses his ninja cunning to, for example, get a seat on a booked flight to New York. And at the end Adkins suits up into full ninja gear for a ninja-on-ninja battle. Also it has many of the other ninja staples that were in NINJA ASSASSIN like an assassination scene, alot of wall scaling, flipping, swinging, hiding in the shadows, etc.

This movie is so ninja in fact that the ‘A’ on the title is a throwing star. That’s why I’m spelling it NINJ*, it’s like when everybody decided SEVEN was supposed to be typed SE7EN. It makes me cool and in-the-know, as you can see.

Adkins doesn’t exactly create an iconic hero here, and in fact I could sympathize with the very cool villain at times. But I do think Adkins does fine in the acting department and is far less of a chump than the heroes of some of the classic white ninja and martial arts movies. More importantly his physical presence is great in the fights, stunts, and somehow even his sword stance at the dojo looks completely menacing. Maybe the next Florentine/Adkins joint will be SAMURA†.

I gotta respect a DTV movie with a villain this interesting, because aside from BLOOD AND BONE and Adkins himself in UNDISPUTED II that’s not something you see too often in DTV action. Also I like that the love interest is a warrior involved in some good fights (especially the one on the subway car) although it’s kind of a shame she still gets beat so bad. She’s the daughter of the sensei, maybe she shouldn’t have this much trouble with the random thugs.

Since this is a 2010 release in the U.S. I’ll take it as a good sign for the upcoming year of DTV. Okay everybody, point your anticipation in the direction of UNDISPUTED III.

DTV Isaac Florentine ninjas Scott Adkins Tsuyoshi Ihara white ninjas
This entry was posted on Saturday, December 26th, 2009 at 5:40 pm and is filed under Action, Martial Arts, Reviews. You can follow any responses to this entry through the RSS 2.0 feed. You can leave a response, or trackback from your own site.