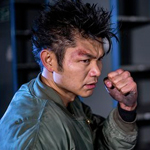 Like so many movie-within-a-movie movies, it opens with their horror movie in progress, a zombie action film called DAWN OF THE DEADLY. It’s interesting because there are plenty of horror movies about people making a horror movie and encountering real horror (DESTROYER, SHADOW OF THE VAMPIRE, DIARY OF THE DEAD, CUT, THE DEAD HATE THE LIVING, FURRY NIGHTS), but I don’t know of any other action ones. And this very much has the feel of a homegrown horror movie, from the type of characters (a little overly dickish, but eventually turning sympathetic) to the references to favorite movies. In this case, though, they’re not tipping the hat to horror movies – they talk about wanting their cinematography to look like JOHN WICK, and their star brags about being in a scene with Scott Adkins. It’s a weird feeling to see movie characters who know who Scott Adkins is. Even in the real world you gotta run in the right circles for that.

When it becomes clear that they’re in real danger and are going to have to fight their way out, they all turn to their leading man… who moves out of the way because he’s standing in front of his stuntman Donnie (Jean-Paul Ly, JAILBREAK). Ly is the clear main attraction here. As Donnie he’s not a macho, blustery Stuntman Mike type of stunt professional. He seems like a pretty normal, down to earth guy with spiky James-Wan-esque hair, but he happens to be very good at acrobatic martial arts. He’s quick to point out that that’s not the same as being equipped for real life-or-death combat, but it seems to work out well for him, with many of the gangsters coincidentally capable of engaging him in long hand-to-hand duels choreographed by Ly. 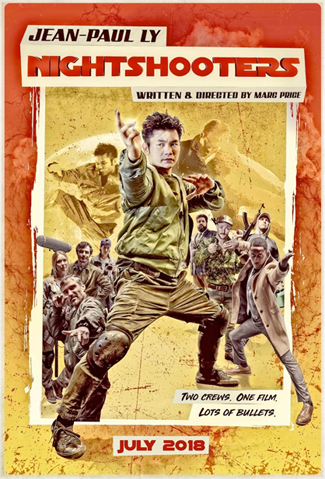 The movie’s other biggest strength is comedian Richard Sandling (VIKING SIEGE) as the sometimes humorously sadistic kingpin Tarker. He looks like kind of a Nick Frost type, but his arrogance and condescension sell him as a believable boss and a good villain who you want to see punished.

Though the other crew members know they can’t win in a straight up fight, they’re able to use their filmmaking specialties in the battle for survival. They use camera and sound equipment to find out what’s going on in other parts of the building, for example. Best but most compromised is the pyrotechnic FX artist setting up and triggering explosives. I found it a slightly distracting irony that this no-budget crew was supposed to be using real explosive charges while NIGHTSHOOTERS itself, a much bigger production judging from all the names on the credits, keeps using not-so-convincing digital ones. But it’s a cool idea. They had to do it.

It’s also kind of in a horror tradition in that there are some exaggeratedly gory deaths, and in how upsetting it is to see regular non-combatant type characters get killed. They’re not living by the sword, so it’s unfair. The cast (especially Nicky Evans [Shameless]) seem to get better the more grim and melodramatic it gets, which is a strength.

On Ly’s websight there’s an article about the movie from Starburst Magazine. Writer/director Marc Price talks about how happy he is to give dialogue to the stuntmen playing the gangsters. He’s especially excited about having Karanja Yorke (uncredited Praetorian Guard in THE LAST JEDI) in the movie because he apparently got headbutted by Drax in GUARDIANS OF THE GALAXY. So that’s the kind of production we’re dealing with, not really a knockout new vision, but a likeable-film-festival-underdog-made-by-people-who-love-the-stuff-we-love. It feels very low budget and homegrown, so I watched it with that spirit of rooting for them to pull things off and feeling proud of them when there’s a really good looking shot or something.

Ly in particular is better than you expect from a movie with this level of production value. Sure, much of it is set in nondescript storage rooms that might as well be their rehearsal space, but compared to your average action movie there are a ton of fights with lots of impressive flipping and flying kicks, framed so that you can see them. (The trailer is below and gives you a good idea of what you’re in for.)

I like that Donnie wears his outfit from the movie-within-the-movie for the whole actual-movie. The flight jacket probly helps him feel good about himself and the zombie-busting kneepads are just a helpful thing to have on during a battle, even with the living. It works out.

Price’s previous features are the zombie movie COLIN (2008), the drama MAGPIE (2013) and a TV movie for kids called ZOMBIES NEXT DOOR (2015). And he’s already followed this one with a western called A FISTFUL OF LEAD which was co-written by Sandling.

I learned about Ly from the Kung Fu Movie Guide podcast. He did stunts in LUCY, THE GIRL WITH ALL THE GIFTS, DOCTOR STRANGE and HOBBS & SHAW, among others, and will be Henry Golding’s stunt double in the Guy Ritchie movie TOFF GUYS. He previously starred in and action directed the 2017 Cambodian movie JAILBREAK, and will be playing parts in Disney’s ARTEMIS FOWL and the Stu Bennett sequel VENGEANCE 2.

NIGHTSHOOTERS is available on Blu-Ray and DVD directly from www.tribal.film/nightshooters

Jean-Paul Ly Michael Price Richard Sandling
This entry was posted on Thursday, February 21st, 2019 at 1:19 pm and is filed under Action, Reviews. You can follow any responses to this entry through the RSS 2.0 feed. You can skip to the end and leave a response. Pinging is currently not allowed.