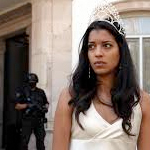 Laura Guerrero (Stephanie Sigman, WAR ON EVERYONE, ONCE UPON A TIME IN VENICE, ANNABELLE: CREATION) is a young woman living in Tijuana with her dad (Javier Zaragoza, GET THE GRINGO) and little brother (Juan Carlos Galvan). We don’t know much about her beyond the impression that we get from her mirror, seen under the opening credits: it’s collaged with photos of her with her friends and magazine clippings of Madonna, Marilyn Monroe, Audrey Hepburn, some anime lady, etc. But when she goes into the city to enter the Miss Baja California pageant it seems less like a dream of hers than just something fun to do with her best friend Suzu (Lakshmi Picazo, later on a show with the cool title Ask God For Forgiveness… Not Me). Laura is tall and gorgeous, but doesn’t seem to give a shit about that. She wears sloppy, loose jeans and walks into the audition with her pageant dress still wadded up in a plastic grocery bag.

Somehow the two girls slip through the first round, but Suzu takes off with some boy (Hugo Marquez, SICARIO [1994]) before their planned shopping trip, and Laura has to go looking for her at a warehouse-sized night club. While she’s in the bathroom Laura sees a bunch of cartel dudes with machine guns slinking in through a window, about to massacre some DEA agents who hang out there. She manages to slip away, but can’t find Suzu.

When she told her dad she’d “decided to go for it” and he said “I just don’t like that environment for you,” I thought he meant superficial beauty pageant people. I didn’t think he was saying she’d get caught up in the drug war. But when she tries to ask a transit cop for help he figures out she’s the witness from the night club and brings her right to the perpetrators.

Just the tone and storytelling approach create great suspense and tension. No big hook is necessary. We are thrust into this chaotic war zone and we have to figure out ourselves what’s going on. Or we have to get by without knowing, which is often what Laura is doing. She knows better than to ask many questions. If they tell her to get in and drive somewhere she doesn’t ask them why, and it’s not the kind of movie where people offer explanations unprompted.

Sometimes the camera stays on her face for a long time, letting us study her expressions. But it seems like more often it follows behind her as she walks or drives or rides into a place or a situation. It really makes us identify with her because we’re going in with her.

I have been told this is much like the Dardenne brothers. Also it’s kinda like many video games.

Takes are generally very long and steady, putting you in the middle of a bunch of shit going down, people running by, sounds of things going on out of frame, panning very slowly and deliberately to show specific details and leave others to the imagination. In maybe the most impressive scene a flaming tire rolls by before we see the vehicle it belonged to. There were definitely stretches that made me think of CHILDREN OF MEN, and given both the subject and the still I’m sure this must’ve been an influence on SICARIO (2015), though this is very different in that it leaves the cops’ perspective entirely out of it.

Cinematographer Matyas Erdely went on to shoot the 2015 best foreign language Oscar winner SON OF SAUL. I haven’t seen it, but I remember people making a big deal out of its first-person-perspective style, which won him a “Spotlight Award” from the American Society of Cinematographers.

You really feel like you’re in this situation with her, and you keep struggling to figure out what you would do. At times she’s much more bold than you, but most of the time there’s not much she can do except what they tell her to do. At one point she was in the U.S. and I was thinking she’s over the border, maybe she can run away from those guys now, they won’t be able to find her. Maybe she can get help. Then I remembered what’s going on in our country right now and how naive it would be to put trust in us for help. A horrible thought. 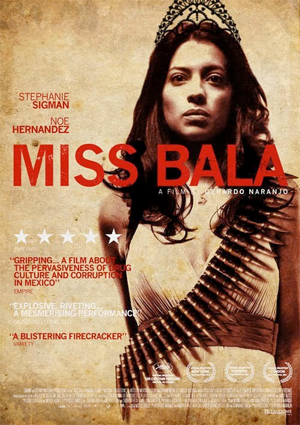 That also made me wonder if it was bad for me to be reviewing these cartel movies, and even if the remake and all these other (mostly good) Mexican border movies we’ve had lately were funded by somebody wanting to put fear of Mexico into American pop culture. Hopefully not on both counts. I’m not gonna get into a political thing here other than to say that because these types of bad things are really going on, we should be the good guys, and should be on the side of people like Laura who are trying to get to safety.

I think in the remake she’s some kind of avenging action queen, which I’m all for, but that’s not what this movie is at all, so seeing the remake trailer afterwards it seems pretty silly by comparison. In this film Laura makes small, brave moves, but she’s not running around blowing motherfuckers away. It’s a simple matter of survival. She wants to find her friend, she knows the gang might kill her, and they have directly threatened her family. It’s very matter of fact about how an innocent person can become an accessory to gun massacres and assassinations. She doesn’t want to drive where they tell her, smuggle money over the border, take her clothes off, but she has to. You would too. She tries to run off more than once. Doesn’t tend to work out.

The leader of La Estrella gang, Lino (Noe Hernandez, SIN NOMBRE, WE ARE WHAT WE ARE, WE ARE THE FLESH), takes a liking to Laura. At least, his version of taking a liking. He sees how she can be useful to the gang. He pretends to be nice and merciful, but there is always an implied threat. She has to duck down near his lap or lay next to him on a bed to hide. She has to hold her hands on her head as if being detained when he tapes bills to her belly. Even when she’s bandaging a bullet wound in his leg the camera suggests domination by using an angle where her head is in front of his crotch.

The title of course changes one letter to rename the beauty queen Miss Bullet. The pageant actually is a major part of the story. Laura gets kicked out for showing up late after the shooting, but then Lito finds out about it and suddenly the pageant director (Leonor Victorica) not only lets her back in but excuses everything she does without a negative word. And Laura doesn’t pretend for one second that she thinks she belongs there.

I think my favorite part of the movie is the long sequence where she’s just back from an intense smuggling run and ambush and Lito puts smelling salts (or maybe something else) under her nose and drops her off at the pageant. She’s messy and half asleep, they paint over her bruises, she goes out on stage and can barely talk, can’t smile at all. The host (Gabriel Chavez) makes a heroic effort to play it off, trying to convince the audience that “she fills us with emotion.” And then SPOILER when gee, somehow she’s still declared the winner, director Gerardo Naranjo milks the discomfort with a long, static shot like a painful broadcast that doesn’t have a commercial to cut away to. Laura still can’t smile, and obviously knows this is bullshit, and at one point her crown falls off and she awkwardly puts it back on. The runner up (Irene Azuela, Sense8) understandably starts bawling while the other contestants, who must’ve noticed that this person missed all the rehearsals and training, try to put on their well-practiced smiles.

It turns out Lito is up to something. He needs a beauty queen in his pocket as a honeypot to trap his nemesis General Duarte (Miguel Couturier, ONCE UPON A TIME IN MEXICO). It struck me that man, this would’ve been such an easy way to get at a former businessman and beauty pageant peeper who is now a high ranking politician. If the type of people who do that shit didn’t do that shit to him they’ve gotta be kicking themselves.

I read that the pageant idea was inspired by a real incident of a beauty queen being arrested with a drug gang. I like it as a symbol, showing how aggressive machismo crushes these exaggerated ideals of femininity. Laura is a tool to Lito, not a person. Both the gang and law enforcement are always dragging her into and throwing her out of vehicles without explanation. When she flies into the U.S. with the money belt the guy doesn’t gently remove it – he cuts it open with a knife and then violently tears the money out like he’s pulling out organs. Cops tackle her, steal her phone, don’t explain what’s going on. Later they beat the shit out of her right after she (SPOILER) saved the general’s life. And he’s the one that tells them to do it. It’s not exactly a hopeful movie. But it’s a really fuckin good one.

I was excited to look up this director, Naranjo, assuming he must’ve had more movies since this. Instead he ended up working in TV, doing the pilot for the American version of The Bridge, three episodes of Narcos and one of Fear the Walking Dead. (Sigman was one of the stars of the first two.) Last year he finally made his followup, VIENA AND THE FANTOMES, an ’80s period piece about a touring punk band starring Zoe Kravitz, Dakota Fanning, Evan Rachel Wood, Caleb Landry Jones and Jon Bernthal. Doesn’t seem to have been released yet. But I’ll keep my eye out.

drug war Gerardo Naranjo Hugo Marquez Javier Zaragoza Lakshmi Picazo Matyas Erdely Mexico Noe Hernandez Stephanie Sigman
This entry was posted on Wednesday, January 9th, 2019 at 10:41 am and is filed under Crime, Reviews. You can follow any responses to this entry through the RSS 2.0 feed. You can skip to the end and leave a response. Pinging is currently not allowed.