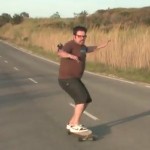 I enjoy a good pervy Larry Clark movie, but I don’t know many people who do. But never fear. I am here to tell you that this is his most accessible because it’s a whole movie based around how likable the characters are instead of how despicable they are. You actually root for these guys. It’s incredible.

I’m not gonna lie to you. You still gotta get past the fact that Larry Clark is a creepy, dirty pervert. This movie opens with a video interview of one of its young stars that has the vibe of that infamous Calvin Klein kiddie porn commercial (in other words, this is a film by Larry Clark). The interview itself is great because the kid, Jonathan, is a non-actor talking about his life and some of the things he talks about we end up seeing re-enacted in the movie later. But you might be a little uncomfortable with the fact that he’s sitting on a bed with no shirt on talking to Larry Clark. Not the most savory individual to be hanging out in a kid’s bedroom.

And then the movie starts and you get a bunch of shots of these teens waking up in their boxers, lifting weights. There is an extreme closeup of one kid’s mustache that then goes down to show one hair growing out of his nipple. You know, to illustrate his burgeoning manhood. Totally legitimate. There’s not nearly as much of this kind of stuff as in his other movies, but I wish he would’ve left it out completely this time, because it’s not as much what the story’s about. You could make a good argument for all the ass and crotch shots in BULLY putting the viewer into the minds of the characters (I probaly argued exactly that when I reviewed BULLY back then). But this is a different kind of story so the sleaziness seems out of place. This guy could do MARCH OF THE PENGUINS 2 he’d still figure out a way to a show a close up of a young person’s ass or crotch.

But you of all people know what Jesus said about forgiving so after forgiving all that stuff, I am prepared to say that WASSUP ROCKERS is a real good movie and I think Larry Clark’s best. I still think BULLY is hilarious but this has the unexpected bonus of heart. ANOTHER DAY IN PARADISE, his movie about a gang of junkie armed robbers, is the closest he’s come to a movie where the characters aren’t all despicable scumbags. Until now. This is a movie completely built around the charisma of this group of seven Latino skate punks.

The stars of the movie are a group of real friends from South Central L.A. who don’t fit into their neighborhood because they wear tight jeans and play in a hardcore band called The Revolts. The title is what people in their neighborhood say to them because they have long hair. They do drink beer a little and are very interested in sex but they’re much nicer and more innocent than your standard Larry Clark characters. They mostly hang out and ride their skateboards. There are long scenes of them taking turns jumping skateboards down stairs and they wipe out way more than they land, and when they have conversations they’re clearly not scripted. More than his other movies, this almost-documentary feel makes you feel young again, just a young dude hanging out with friends, laughing at each other’s pain. There is one scene where the boys decide to pick up one guy like a baby and toss him around to each other for as long as they can, and they all laugh. That is the kind of stuff this movie is about. Don’t expect a murder mystery or nothin.

Then they all pile into a car to go to a skate spot, but nobody has a license so they get pulled over by bike cops and have to give up the car. (“I bet you guys are happy to get a car.”) The rest of the movie is about them being stuck in Beverly Hills trying to get back to South Central and dealing with all the white cops and rich people they encounter. There are two reoccurring bits of dialogue that made me laugh. Every time they encounter somebody 1. one character says “We’re from the ghetto,” and 2. they get called Mexican and have to explain that they are Salvadoran and Guatamalan.

So it’s been compared to THE WARRIORS and some movie called THE SWIMMER. At this point the movie turns more cartoony as they get into trouble with various rich Beverly Hills people, some of it is surprisingly over-the-top and some of it is hilarious. There are some rich white kids in Beverly Hills who don’t even have to do anything, you just laugh every time they’re shown with their blazers and spiky hair and shit. There’s also a crazy cameo by Janice Dickinson as a drunk rich lady who tries to seduce one of the kids. I know that bitch is supposed to be crazy but either they really got her drunk or she’s real good at playing drunk.

Long ago I accepted the harsh reality that normal people hate Larry Clark and I’m never gonna be able to convince anybody to see BULLY, much less enjoy it. But I’ll give it another shot with WASSUP ROCKERS. I really believe this is a unique and joyful enough movie that you people should see it. These are characters you don’t usually see in movies, and you’ll enjoy rooting for them. Seattle was just as harsh to the movie as their neighborhood is to the Wassup Rockers. There were no print ads, it opened in the $3 second run theater out in the suburbs, and it got replaced by NACHO LIBRE after one week. So I’m guessing most of you will have to see it on DVD anyway, which will make it convenient if you need to fast forward through the pervy parts. Let’s just hope they don’t release an unrated version.

Larry Clark
This entry was posted on Saturday, July 29th, 2006 at 3:05 pm and is filed under Comedy/Laffs, Drama, Reviews. You can follow any responses to this entry through the RSS 2.0 feed. You can leave a response, or trackback from your own site.

One Response to “Wassup Rockers”