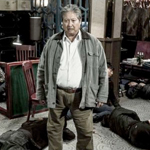 Meanwhile there’s this little girl next door named Cherry (Jacqueline Chan – no relation) whose dad (Andy Lau, HOUSE OF FLYING DAGGERS, DETECTIVE DEE AND THE MYSTERY OF THE PHANTOM FLAME) is abusive and “except for his hair he’s a total loser,” so she hides out with Ding and becomes his surrogate grand daughter. It’s pure Hong Kong saccharine, but I can’t deny that saccharine is sweet. It works. It’s also the source of the action portion of the movie because the dad has a huge gambling debt and in the movie’s first, biggest and surprisingly late action sequence he steals a bag of jewelry from a sleeping, farting gangster’s hotel room and there is a pretty good chase scene. He slips away and the Triads can’t find him so they come after his daughter, and that means resting badass Ding gets involved. In the last third of the movie or so. 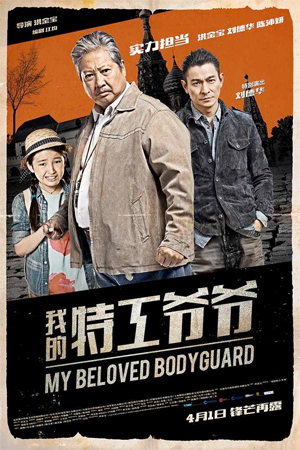 This played in the same AMC theater where I’ve seen Asian imports like KUNG FU KILLER, MERMAID, IP MAN 3 and KILL ZONE 2, always with around ten people or less in the audience. It made me wish it could’ve been KILL ZONE 2 that I saw with a crowd, because that is a truly great martial arts movie with a great story and characters and several absolutely jawdropping action sequences. It would add an extra jolt to share the experience with others.

Not that a SIFF crowd is always the best to see a movie with. I forgave them for laughing at Ding’s memory lapses – for example picking the lock on his front door because he forgot he wears the keys around his neck – like they were cute little jokes. Not as much when they laughed at all the martial arts as if they were campy. But I got through it. And they definitely seemed to get way more excited by the fights than I did, so good for them. They also thought that when characters called Ding “Kung Fu Panda” it was like the funniest joke of all time.

I was a little nervous about if this movie would be too sad for me. As I’ve mentioned before, my dad had several miserable years being devoured by Alzheimer’s before passing away 6 months ago. It will remain a traumatic time for me and a terrifying spectre of my worst fear for my own future. As it turns out, Ding is older and less advanced in his dementia than my dad was, really having more of a case of senility. But he reminded me more of my dad than John Lithgow’s Alzheimer’s sufferer in RISE OF THE PLANET OF THE APES did. Something about the look on his face, a distance, and a calmness hiding helplessness.

Acting-wise, Hung is successful. He’s a lonely old man too nice to take out his frustration and confusion on others. So he just kind of pretends like he knows what’s going on. If there was more depth to this thing maybe I wouldn’t be complaining about the subpar action. This is something Hung will have to look into as an aging action star. But he does have a solid classical action movie premise here, and also pays homage to other Hong Kong legends by having Dean Shek, Karl Maka and Tsui Hark cameo as old men who sit on the street commenting like Sweet Dick Willie and friends in DO THE RIGHT THING.

As a filmmaker Hung gets playful, even random. The movie opens with a fight in the rain at night, looking like THE GRANDMASTER, seeming kind of classy. But then there are the animated crayon drawing scenes, and the THE STREET FIGHTER style x-rays of breaking bones. It gets goofy. And it has many lovingly incorporated music cues. Some dude in the crowd was mystified at the use of Bill Withers’ “Ain’t No Sunshine.” Yeah, it’s in English, but it perfectly describes him missing the girl.

I wish Hung felt as enthusiastic about the fight scenes. When he finally gets pushed to the limit and has to kick some asses it’s very reminiscent of late Seagal: close up, heavily edited, mostly just waving his arms around, occasionally a bigger move done by an obvious stunt double.

This is inevitable, it’s sad for me to face that we’ve reached that point. As old as I suppose they are, I think of KILL ZONE and IP MAN 2 as pretty recent movies, and those both have outstanding fights that Hung both choreographed and participated in. So I suppose this is a more powerful illustration of the same thing Ding’s dementia tells us: no human body lasts forever. Not Sammo’s, not anyone’s. Eventually ours will give out. Our brains will stop remembering, our organs will cease operating properly, our muscles will stop holding us up. Even if we’re lucky enough to last a long time, we can’t have it all. We’ll live long enough for our Chinese Opera training to fail us. But that’s okay. It beats youthful death by misadventure.

I’ve been thinking about this lately as my family and my heroes have been dying. It tends to remind you about that whole mortality thing. I’ve made it to an age where I still think I’m a young guy trying to get his life rolling, but realistically I’m getting old and regretting not having gotten my shit together the way I expected to. I’ve long since soared past the “Orson Welles was only 26 when he made CITIZEN KANE” misery and have to resort to “Colonel Sanders didn’t invent KFC until he was in his 60s” for comfort. And I have morbid thoughts about what happens if I suddenly have a heart attack or I’m in a plane crash. I can’t die, I never quite my day job. I never wrote a movie. I never had kids. I never rode the Fast and the Furious ride.

More than that I worry about what Ding has here, what my dad had. I’d never want my lady to have to deal with what my mother did. Actually it would be worse, since I don’t have the kind of insurance or savings that could keep me taken care of.

I want to get old. I want to remember. And I want to leave a great legacy, one that could also help take care of whoever I might leave behind. But we can’t control all these things. We can’t all be as great as Sammo, and for all we know he frets about not having Jackie’s career. Eventually we’ll be gone. Most of us won’t leave behind a legendary body of work like Sammo, but we’ll live on in someone’s memories of a funny thing we said one time, a laugh we had together, an act of kindness. That’s not bad.

I hope THE BODYGUARD doesn’t mean the end of good new Sammo Hung movies. But if it does, there’s always the old ones. For now we have the memories – let’s enjoy them. There will always be EASTERN CONDORS.

Hong Kong action Sammo Hung SIFF
This entry was posted on Thursday, June 23rd, 2016 at 11:52 am and is filed under Action, Martial Arts, Reviews. You can follow any responses to this entry through the RSS 2.0 feed. You can skip to the end and leave a response. Pinging is currently not allowed.

13 Responses to “The Bodyguard”