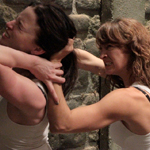 RAZE seems influenced by HOSTEL – victims locked in a dingy, windowless sanctum for the entertainment of rich sickos. Instead of being there to be tortured it’s the ol’ “they’re watching the live feed” as the fighters, all women, are forced to beat each other to death. The killing with bare hands is not 100% believable, especially from the girls who’ve never fought before. But it’s not pretty. It’s repeated head-bashings, strangulation, neck snaps, thumbs in eye sockets. Pretty brutal. The actors and stunt women acquit themselves well, but it’s rare that a shot shows more than one hit without cutting, and that’s a problem.

If I’d recognized Rachel Nichols (GI JOE 1, P2) I might’ve (spoiler) fallen for the sort of Janet Leigh in PSYCHO/Drew Barrymore in SCREAM type of move they do with her. But as I expected this is really a vehicle for Zoe Bell, the great KILL BILL stunt double and DEATH PROOF star. She plays her ex-military character Sabrina as a classic Plissken-esque badass until the script makes her break down and cry in a pretty effective self doubt scene. The best performance is by her DEATH PROOF co-star Tracy Thoms, maybe the wisest of the Razers, who has a genuinely moving scen 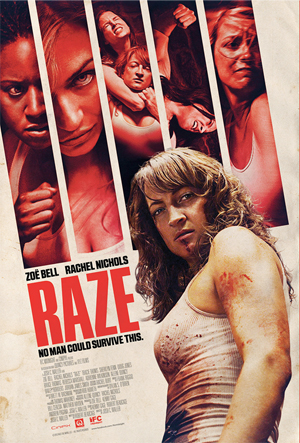 e where she (spoiler #2) sacrifices herself so the other fighter can have a chance at living. When she turns her back and there’s a cross tattoo on her neck that might be a little too much, but I’ll allow it. It’s harder to be Christ-like when there’s no nails for anybody to pound into you!

The whole operation is enforced by beefy bodyguards, but run by Doug Jones (PAN’S LABYRINTH, McDonalds) as sort of a cult leader who talks a bunch of mumbo jumbo like he’s bringing everybody enlightenment. Sherilynn Fenn plays his wife, doing a solid rendition of the ol’ “It’s creepy because she’s acting all nice but what she’s doing is evil” routine.

This the feature debut for director Josh C. Waller, but he did a David Morse vehicle called McCANICK that also has Rachel Nichols and Tracy Thoms and that also came out on video today. He seems to be pretty entrenched in the modern world of low budget indies that make the production value of the Roger Corman and Cannon days seem like an impossible dream. Those motherfuckers used to go out into a jungle and blow stuff up! They had access to helicopters and shit! Can you imagine a low budget filmmaker today figuring out how to hire a helicopter pilot? Fuck no! Too much trouble. They just write around it. All helicopter-free action scenarios, unless it’s a fake looking CG helicopter in like two shots.

RAZE is kinda more like CUBE than, say, a BLOODFIST movie, because aside from some brief flashbacks it’s pretty much confined to this small space, a small concept to match a small budget. But it doesn’t come off as well as CUBE because it’s not as clever of a gimmick. We’ve seen this death match idea a whole bunch of times before, in cheap movies that still had more production value and variety to the imagery. Are today’s low budget filmatists just lazy?

I don’t know. That’s fine, they gotta make do with what they can get. Simplicity can be an advantage. My problem with RAZE is that it’s just a bummer. Of course you know I have a love of the underground fighting tournament format, and I’m able to enjoy it in both its generic form and in interesting variations. But the main idea behind the genre, obviously, is that it’s fun to watch people fight. You want to see some good choreography, some surprising moves, some colorful fighting styles, some assholes that get what’s coming to them, some underdog victories, hopefully a variety of interesting fight locations. The only one of these things RAZE emphasizes is having an asshole character, and to be honest I already forgot what happened to her.

Also, there’s not a character with a ridiculous snake tattoo or an awesome headband or anything like that. They all wear the same drab grey sweatpants and white tank tops. Because of it’s dark, man. Life is shit, etc.

Let me put it this way: one of the few memorable moves, a head smashed against a bumpy brick wall and then dragged all the way down, happens to an innocent girl who has no chance of survival. You’ve already been wincing since the beginning of the fight. The characters are sketched pretty minimalistically, but to whatever extent you have sympathy for them you want them to not have to fight at all. They’re victims, being forced to beat each other to death to save their loved ones. There’s no joy in any of the fights, only misery for both parties. All three, including the audience.

So forget fighting tournaments, does it work as sort of a slasher movie? For me, no. In a slasher movie you have to have a chance of getting away, and you have to get pretty close. The thrill of the chase and the skin of the teeth factor: getting away, or getting caught, but just barely. Instead of that it’s scene after scene of two women in a small room bashing each other, with only one of two possible outcomes. There are scenes in the middle that suggest the potential of the women working together and rising up for an exciting climax, but don’t hold your breath. We’re still waiting for that great post-DEATH PROOF Zoe Bell vehicle, and the best they’ve given her so far feels more like a so-called torture porn than a fight movie. But her day will come. 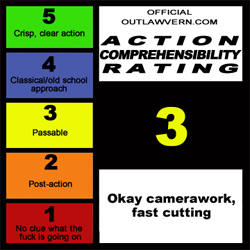 Doug Jones Rachel Nichols Sherilyn Fenn Tracy Thoms Zoe Bell
This entry was posted on Tuesday, May 20th, 2014 at 12:23 pm and is filed under Action, Reviews. You can follow any responses to this entry through the RSS 2.0 feed. You can skip to the end and leave a response. Pinging is currently not allowed.