Well, Mel Gibson is no Lee Marvin and writer/director Brian Helgeland (A Knight’s Tale) is no John Boorman. But I think Payback is an underrated movie. It’s a good balance of vicious and funny. It’s got a bit of a ’70s throwback feel and lots of weird touches to make it an indistinct time period. There are rotary phones, and primitive credit card technology that makes fraud more convenient, and the film is washed out with bleach making everything have a pale blue tint to it. You’re not sure when this is supposed to be taking place, which in a weird way reminds me of the experience of reading the books. Most of it reads pretty modern but obviously you are dealing with armed robbers, there is money, communication and security technology that would make some of the stories impossible today. So I sometimes have to check the copyright dates to be sure when this would’ve happened. 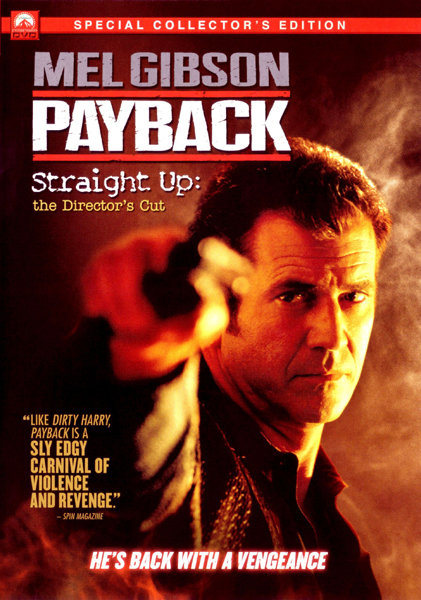 Point Blank is the best movie based on those books, but it’s not really faithful to their tone. It’s much more arty, and “Walker” (as Lee Marvin’s Parker character is called) is much more emotional. There’s even a part where he sits on a couch being sad for a long time. They always gotta give Parker too many normal human attachments in the movie adaptations. I think Payback is a little closer to the feel of the book. You side with him, but he always does things that make you think, like James Coburn’s character says, “Man, that’s just mean!”

Let me give you an example of how tough this movie is. Right now the current movie everybody I know is talking about is Grindhouse. In that movie, Freddy Rodriguez plays a guy who is pretty much supposed to be the toughest, most skilled motherfucker on the planet. In Payback, Mel Gibson as “Porter” beats the living shit out of Freddy Rodriguez. He grabs him by the head and tosses him against a wall. Freddy pulls a gun, Porter quickly grabs it out of his hand, punches him in the stomach, nearly makes him puke. Then he turns him around and frisks him. Then he punches him four or five times in the kidneys. Then he rips out his nose ring. Watching the movie back in 1999 I thought “Jesus, they don’t make ’em like this anymore” and watching it again the other day I thought the same thing.

However, there has always been a dark cloud over Payback. You see, when the movie was test screened, the studio and the producer (who happened to be Mel Gibson) got scared. Apparently they all agreed it wasn’t working, but Helgeland just wanted to work on the very end of the movie. The other people thought it needed to be completely reworked to be more audience friendly. Gibson had the last act rewritten, but Helgeland simply was not interested in doing extensive reshoots, he didn’t know how to imagine the movie any other way than what he had. Because he was the producer of the movie, director’s guild rules wouldn’t allow Gibson to take over as director. The rumor at the time was that he hired his hairdresser as the “director,” really just acting as a mouthpiece for Gibson.

What they came up with was a much different version. They added more explanation to Porter’s coming back from the dead at the beginning. They added voiceovers to make him more into a film noir anti-hero. They gave it a happy ending, obviously. In fact they rewrote and reshot the entire third act with a kidnapping plot that wasn’t in there before. Kris Kristofferson was added as the lead villain Bronson — in Helgeland’s version Bronson was just Angie Dickinson’s voice over a speaker phone.

For years I’ve had a shitty VHS bootleg of Helgeland’s unfinished cut, so I knew how different it was. But honestly I liked both versions equally. Some of the cheesier elements of the movie (like the way he blows up a car) I think were added in Gibson’s version, but I like some of what he added too. The story does seem to build to a more exciting climax, so there is something to say for being more Hollywood. And it’s not like they completely toned it down. I mean, that version opens with a sleazy back alley abortionist prying bullets out of Porter’s back. And one of the ways they made him more “heroic” was to have the bad guys smash his toes with a hammer.

So I always liked both versions about equally, but the studio version wasn’t exactly beloved by many, and there was always this bad aftertaste about it because this underdog Helgeland got so fucked over. A couple days after he won an Academy Award, too. But I believe it was either Howard Zinn or the dad from The Simpsons who said “Did Braveheart run away? Did Payback run away?” And the answer, to the second one at least, is no. Last Tuesday something that I never thought would happen actually happened: Paramount released Payback — Straight Up: the Director’s Cut to DVD and various high tech space technologies.

This Straight Up version is an entirely different movie. It’s not even like that old bootleg I have. Helgeland went back and recut the movie from scratch (on film, even). He rescored it and they even re-processed it, so it doesn’t have that blue tint anymore, but a more subtle digitally created washed out look.

It does have that original third act (now with Sally Kellerman’s voice as Bronson, for some reason) but even the earlier scenes feel new. The whole tone is different. Most of it no longer feels like you should be laughing. There’s a very disturbing new scene early on where Porter beats up his wife, played by Deborah Kara Unger, and shows her a photo. It’s only later, in a flashback, that you learn she was the one who shot him in the back, and what the meaning of the photo is. It’s a tricky move — he lets you wonder for a while what you’re supposed to think of this guy. Then you see the flashback and realize oh, okay, he’s not such a monster after all. But still, what a bastard.

The weird thing is, I still think there’s enough room in the world for both Payback and Point Blank, but now that I see this darker, more serious version I realize that it’s not as different from Point Blank as it used to be. The new music actually makes everything seem much grimmer, not as wiseass as it was before. The opening theme is not as funky as it used to be, but otherwise I think the new score is a huge improvement. No more Lethal Weapon style guitar noodling, no unnecessary use of a Jimi Hendrix song. The movie is also more fast paced now, they cut out 11 minutes. And in retrospect, there was a lot of contrived Hollywood business in that theatrical cut — we really don’t need to see Porter blowing up a car from a gas trail and all that shit, do we?

The DVD doesn’t include the theatrical version of the movie, but otherwise it has everything you would want: a commentary track, a couple really in-depth documentaries, even an interview with Richard Stark expert Donald L. Westlake.

One documentary goes through the whole history of the director’s cut and how it was made. They talk fairly openly about the disagreements, and Helgeland seems pretty forgiving about it. Gibson deserves credit not only for helping Helgeland to get this cut made and released, but for actually being interviewed in the extras. And he did the interview when he was sporting that crazy Apocalypto beard, too. So we have that one archived for posterity. Gibson does seem a little defensive about his part in the whole fiasco, and only halfway convincing in his argument that “you can’t make a movie for an elite” and need to appeal to a broad audience every time. But I still can’t believe he was willing to talk about it. I guess after his whole anti-semitic thing he’s used to coming out and taking his lumps.

The one topic they completely avoid is who actually directed the reshoots. I have had a pet theory for a few years now, I believe it was Paul Abascal, director of the 2004 Gibson-produced (and completely insane) action movie Paparazzi. The director was rumored to be Gibson’s hairdresser, as Abascal was on the Lethal Weapon series. His first directorial works were “Mel Gibson’s Video Diaries” for some of the Lethal Weapon pictures, so he fits the profile of a director willing to work as a mouthpiece for Mel Gibson. He also directed some TV here and there, but his first official movie directing credit was Paparazzi, a movie produced by Gibson, from an idea by Gibson, clearly based on the life of Gibson (it’s about the star of a popular action movie series being harassed by photographers). So when I saw that movie I thought wait a minute. Maybe it really was Gibson’s hairdresser directing the reshoots, but not just as a proxy for Gibson. Maybe he really is a director.

The new Payback DVD does not confirm or deny my theory, but IMDb does. Some time between now and when Paparazzi came out, somebody added production designer John Myhre as the uncredited director of the reshoots. I don’t know where that information comes from, but it is not as cool as my theory. So this one will have to end like Zodiac — here I am, finally satisfied with my conclusion, but seemingly disproven in the eyes of the rest of the world.

Oh well. The important thing is, we now have two Paybacks. I think I officially like the director’s cut better, but I’m keeping both versions. Now there’s one Paparazzi in the world, two Paybacks — that seems about right. Life isn’t too bad.

Brian Helgeland Donald Westlake Mel Gibson Parker
This entry was posted on Tuesday, April 17th, 2007 at 12:15 pm and is filed under Action, Crime, Drama, Other Sites, Reviews. You can follow any responses to this entry through the RSS 2.0 feed. You can skip to the end and leave a response. Pinging is currently not allowed.