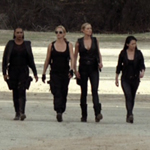 But leave it to Asylum, the studio that brought us SHARKNADO and I AM OMEGA, to have theirs already done and released before the other two even settle their casting. Admittedly this DTV female mercenary squad is light on marquee names, but it’s a good team. They have Zoë Bell (DEATH PROOF, THE BAYTOWN OUTLAWS, GAME OF DEATH), Kristanna Loken (TERMINATOR 3, S.W.A.T.: FIREFIGHT), Vivica A. Fox (KILL BILL, THE HARD CORPS, BLAST, SET IT OFF), and, uh, Nicole Bilderback (CLUELESS, BRING IT ON). END_OF_DOCUMENT_TOKEN_TO_BE_REPLACED