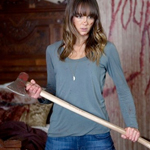 For me this was not a KICK ASS situation where it seems like you must’ve had to be there at that one midnight screening to have any idea how people could enjoy the movie that much. My smaller 7:50 multiplex audience for YOU’RE NEXT was laughing and enjoying themselves too.

An official plot summary from Lionsgate says that “YOU’RE NEXT reinvents the genre by putting a fresh twist on home-invasion horror,” but I don’t know about that. Put that out of your mind. There’s nothing reinventing, postmodern or trope-subverting about this as far as I noticed. It’s just a plain old fun horror movie, like a horror fan would want to see.

In fact, I think if somebody is claiming this is a more-self-aware-than-usual horror movie then it’s kind of condescending toward the long history of horror movie makers and fans. Yes, the young indie film scene guys who made this may have been aware that opening with a couple having sex and then getting killed is part of the slasher movie formula. But so were the guys who made the FRIDAY THE 13TH movies, stupid. Neither of them is commenting on it, they’re just two generations following in the same great tradition, for the same reason: people like that kinda shit. Including me.

No matter what anybody says, I think the goals of YOU’RE NEXT are modest. It’s not trying to be visionary, hit-you-in-the-gut horror like they got crawling out of France, or some kind of SCREAM meta deal. It’s just a slasher movie. Still a legitimate genre, people. 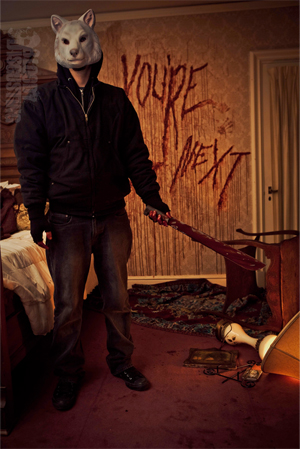 Like alot of the horror movies that get put up on an internet pedestal this is the type that has alot of laughs and doesn’t make you feel bad. But luckily for my tastes I think it is a legit horror movie and not a horror-themed comedy. This is not Macklemore horror, the one that you resent because people you know who don’t really like horror say it’s the best horror. (Man, if Macklemore was popular when CABIN IN THE WOODS came out my I wouldn’t have had to compare it to Kenny G and my friend wouldn’t still be giving me shit about it.)

YOU’RE NEXT is enjoyable because it’s not afraid to do what many enjoyable lowbrow horror movies do, and often get shit for: make you laugh at the characters for making stupid decisions, and root for unlikable characters to bite it. But it also gives you one person to root for: one brother’s Australian girlfriend Erin, meeting the family for the first time, and played by STEP UP 3D’s Sharni Vinson. I totally forgot she was gonna be in this and didn’t realize she was the one all the early reviews were making a big deal about. I like to think we here, as appreciators of STEP UP 3, were ahead of the curve on this one. I mean, I already declared her my top ranking Step Up Girl, it’s only natural that she could also be a great new Final Girl (and soon Expendagal).

I was a little concerned at first that most of the characters were so immediately douchey. The parents (played by Barbara Crampton and the bad guy from KINGPIN [Rob Moran]) are nice, but we know that people in their 50s are not gonna be allowed to survive. Erin is the clear winner of audience sympathy, but CHRONICLE proves that some of these young filmatists think it’s a good idea to kill off any likable characters at the beginning and make you spend the rest of the movie looking at whiny assholes. So I really  was worried they’d make her go first, especially when she went around making sure the windows were closed and got grabbed by one of the animal-masks.

Then she turns around and stabs the motherfucker in the head, and he’s not magic so he screams. Alot of laughs come from how capable she is, immediately taking charge and telling people what to do, while everybody else stands around like a bunch of idiots. They look at her dumbfounded and wonder why she knows so much about first aid and weapons, or why the thought of hiding in the basement instantly makes her imagination jump to gasoline being dumped down the stairs and set on fire. What kind of a life have you lived, girl?

It’s kind of a have/eat cake situation, we get to root for Erin to win this battle, but also laugh at the viciousness of the others’ fates at the end of arrows or the sides of razor wires. One guy still bickering and insulting his family while he has an arrow sticking out of his back is kind of permission for us to not feel too bad about the massacre. And of course the invaders are human and morally despicable, so we get to enjoy painful revenge inflicted on them, a pleasure you don’t get much of in a Jason, Michael or Freddy movie.

By the way, at some point people in movies are gonna have to learn that if you get an arrow or shard in you you should leave it in until you can get proper medical treatment. Pulling it out is just gonna make you bleed to death, you dumb bastard. That was the one thing I was disappointed in Erin for not knowing.

Filmatistically it’s pretty basic, well-executed if not visually impressive. My one complaint is one familiar in action movies but not horror: when the shit first starts going down the camera starts shaking all over the place. It’s not so much that it’s hard to tell what’s going on. This is the rare case where it actually made me kinda whoozy, like people said about BLAIR WITCH PROJECT back in the day. I started thinking about all of the beautiful, careful camera moves in horror classics by John Carpenter, Brian DePalma and Stanley Kubrick, and how even the lesser horror directors used to love to use cranes and steadicams, and… luckily then the camera calmed the fuck down so I was able to stop worrying about it.

This is not so much a criticism as a minor observation: the title is weirdly insignificant. There’s no strong reason why the attackers write the phrase in blood two times. In the prologue it’s seen scrawled on a window, but director Adam Wingard chooses not to use its reveal as the title card. At the end he opts not to have the Final Girl say it to the last guy she has to kill. And when it’s splattered across the screen for the end credits it has no larger meaning, no reason to think it’s talking to us. It’s just the title again. Maybe using it in those ways would be too obvious, but I think it would be satisfying.

I assumed this Adam Wingard was a rookie director, like so many who make an impressive indie horror movie out of nowhere. But actually he’d done 3 features before, two I think are unreleased on video but one was A HORRIBLE WAY TO DIE, which I think I’d even heard of before, unless I’m just mixing it up with A LONELY PLACE TO DIE. He’s since done segments in the VHS and ABCs OF DEATH anthology movies. Writer Simon Barrett also did A HORRIBLE WAY TO DIE and other things with him. He wrote DEAD BIRDS, which I’ve heard is good, maybe I’ll finally get to that this Halloween season. Also he’s a legit DTV horror guy because the motherfucker wrote FRANKENFISH.

For some reason the movie I want to compare this to is CABIN FEVER: just a fun  audience horror movie, it knows the tricks and is enjoying them, not making fun of them. It’s probly not as clever as CABIN FEVER though, and I’ll be surprised if these guys grow into horror practicioners as reliable as Eli Roth. But I’d like to be wrong. I want to see a sequel where [SPOILER] a gang of angry surfers try to avenge Erin for killing their friends. And do not live to regret it.

Adam Wingard Barbara Crampton home invasion Joe Swanberg Rob Moran Sharni Vinson slashers Ti West
This entry was posted on Friday, August 30th, 2013 at 5:19 pm and is filed under Horror, Reviews. You can follow any responses to this entry through the RSS 2.0 feed. You can skip to the end and leave a response. Pinging is currently not allowed.