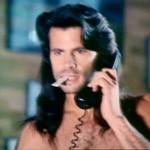 Andrew has a comic relief partner named Leo (Frank Crudele, BLACKJACK, STEP UP ALL IN, one episode of Highlander: The Series) and a therapist (Michael Copeman, THUNDERGROUND, SCANNERS III, UNIVERSAL SOLDIER II, six episodes of Highlander: The Raven including the pilot) who you can tell is kind of a cool ex-hippie type because he has grey hair but wears a colorful Hawaiian shirt and is into experimental therapies. END_OF_DOCUMENT_TOKEN_TO_BE_REPLACED