SCANNERS 3 makes it clear that muthafuckas forgot about Cronenberg. Now it’s cheesy electric guitars, actresses who look like ’80s Playboy models and amateurish overacting that shifts in and out of different accents. The action kicks off with our hero scanner Alex Monet (named so because this is a great work of art, and played by Steve Parrish) brain-pushing his buddy as a party trick. But then somebody pats him on the shoulder, breaking his concentration and he fires his friend out the window, killing him. That sucks so he goes to find himself in Asia like Rambo III. 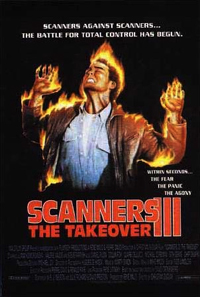 Meanwhile his sister Helena (Liliana Komorowska – a Christian Duguay regular who appears in SCREAMERS, JOAN OF ARC, THE ART OF WAR, EXTREME OPS and HITLER: THE RISE OF EVIL) tries out EPH-3, a new experimental drug her dad’s company is working on that stops her migraines and hearing of voices but, as one character says, “it’s almost like it’s blocking your conscience.” (Also I’m sure it can cause dry mouth, drowsiness and extreme diarrhea. Do not take with alcohol or other prescriptions. Get help immediately if EPH-3 causes world-conquering urges. Talk to your physician to find out if EPH-3 is right for you).  She quickly turns from mousy nobody to scheming, cackling, patricidal, ball-busting CEO soap opera bitch queen. She pretends to be sad after scan-drowning her dad in a hot tub, but gives herself away because she can’t restrain her evil smiles while other people are still in the room.

Helena first uses her scanning powers on some punks who try to mug her in an alley. I don’t get why people in movies ever cut through alleys anyway. There’s always punks or creeps there and they always try to mug you. Anyway, this is your signal that it’s more of a shitty action movie and less of a Cronenberg follow-up.

And yes, I believe there are three head explosions this time. And a part where she makes a business rival dance badly in public. And sped up footage of a guy spinning in a revolving door until he pops. And thugs that dress kind of like the Blues Brothers.

Speaking of brothers, hers comes back to the states to save the day, there is some rappelling, some motorcycle jumps, some exploding vehicles. It’s decent action, actually, and one really spectacular flaming motorcycle stunt. But the guy doesn’t have much charisma so it’s hard to get too invested in the scenes.

The one really clever new idea is when Helena’s having sex with the TV on in the room and she accidentally transfers her orgasmic feelings to the guest on a talk show. It’s played more for weirdness than for laughs, and I dig that. But then it inspires an evil plot where she goes on TV so she can scan everybody who’s watching. She also blows up a football player during a game. Commentators aren’t supposed to interfere like that. It’s unethical.

I guess it wouldn’t have taken a scanner to guess that these movies would suck. But you know how I am. I gotta know for myself. At least there are a few laughs here and there. And they were constantly pushing the technology of bulging vein effects by making these movies. Without them who knows where we’d be with that.

Christian Duguay DTV DTV sequels
This entry was posted on Sunday, June 6th, 2010 at 11:09 am and is filed under Horror, Reviews, Thriller. You can follow any responses to this entry through the RSS 2.0 feed. You can leave a response, or trackback from your own site.

13 Responses to “Scanners III: The Takeover”