Along with that title there are two other great phrases in the opening credits:

1. “Based on the novel ‘Rafferty’s Rules’ by W. Glenn Duncan”

Yes, in the tradition of DIE HARD 2 this is an action movie that lifts part of the plot from a novel about a completely different character. This Rafferty is apparently a P.I. who appeared in a series of novels. They couldn’t call it SNAKE EATER III… RAFFERTY’S RULES, because who the fuck is Rafferty? So I guess they went for paraphrasing it into HIS LAW. 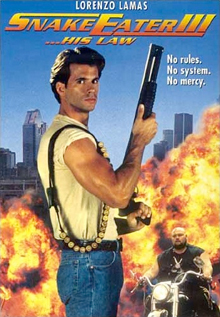 Yeah, remember Bam Bam Bigelow? He was an ’80s WWF wrestler that I forgot about. A big bald guy with a detailed tatoo where his hair would’ve been. He wore black tights with flames down them like some kind of rockabilly guy. So I guess it makes sense that he would play an evil biker.

As usual, Soldier gets in trouble at the beginning for overdoing it. Actually he’s not that out of line this time, he happens to be walking by a diner that’s getting robbed and he comes in and pretends that he was planning on robbing the place too in order to confuse the guy and save the hostage. But the hostage is so terrified by his fake threats that she rewards him with a lawsuit. Probly because of the liberals, or bureaucracy or whatever. You know how it is these days.

So he’s on suspension and then can focus on his true life’s calling of murdering criminals and getting away with it without much effort. An old rich couple see him on TV and summon him so they can pay him to get revenge on a biker gang called Hell’s Furies that used their daughter as a sex slave. She’s so far gone that when they introduce her to Soldier she starts to take her panties off.

Soldier goes to a tavern and finds an old buddy of his, a private eye named Cowboy (stuntman Minor Mustain) who’s got kind of an older Fred Ward vibe and does in fact wear a cowboy hat. Together they track down the bikers and enforce… HIS LAW. Rafferty’s Rules I guess were a numbered list of tips for private eyes to remember, like “#8: The client has to say out loud what he wants me to do.” HIS LAW is not the same thing, it’s the ol’ “his own rules,” deal. He feels he doesn’t have to obey the law, because he obeys HIS LAW, which is to get Bam Bam Bigelow to drink beer all day so that even though he takes special pills that make him not have to pee very much he eventually does and then the toilet is boobie trapped to electrocute him. (I’m not clear why they didn’t just shoot him, or why they left the trap and a pyramid of fingerprinted beer cans at the scene.)

There are two instances of characters having to interrupt sex acts because of a phone call and answering it in an odd way. First is the biker leader who takes a long walk to the mobile phone on his bike and says “You wakin me up for this?” I don’t understand why he was pretending he was asleep. Is he really too polite to say that he was dry humping a topless gal on the couch?

Then there’s Soldier, who is getting down and then answers the phone, “Hello, Kelly’s Ballpark.” I’m not sure if this is a reference to “ballin” or that she was doing something with his balls or what.

Bigelow is not the lead villain, which is probly for the best because he seemed alot scarier as a wrestler. Here he tries to fake a gravelly voice and it makes him seem like a phony. He doesn’t look as big as he did in the ring, either. I’m not sure why. Maybe Lorenzo Lamas is taller than you’d think.

The plot is so dumb. It doesn’t make any sense that he keeps getting away with this shit. It’s not like Paul Kersey, where he’s trying to sneak around and cover his tracks. Soldier Kelly does nothing to hide what he’s doing, and even though the cops know who he is and that he’s after these people (and they probly know that he previously confessed to murdering drug dealers and was put in an insane asylum) but they don’t seem to figure out that it’s him. In one scene he and his girlfriend are being stalked by bikers at their house, they try to get away and then Cowboy just drives up and shoots them. Maybe they should’ve thought of that.

But the beauty of the movie is in all the funny dialogue and goofy jokes. There’s a scene where he interrupts a biker having sex with an underage girl and he asks the guy to put on underwear before they fight, then thanks him when he does.

There’s another bar-fight-against-a-bunch-of-bikers scene with a butch girl biker involved. When he’s got her in his sights she switches her voice to be more feminine and asks “You… wouldn’t hit a girl, would ya?” Cut to exterior of bar as she’s tossed through the window.

In that same brawl he fights “Boog,” easily recognizable as Michael Scherer, the guy who played Goliath in part 2. But a totally different character.

My favorite part is when a cop at a crime scene accidentally offends Cowboy. “Hey Soldier,” he yells. “Don’t let me catch you and Roy Rogers playin Sherlock Holmes on this case.”

Cowboy turns, then (taking his time) walks over to the cop. “Dirkie,” he says threateningly. “Do you have a problem with Roy Rogers?”

The camaraderie between Soldier and Cowboy is actually the best part of the movie. No offense to Speedboat from part 2, but Cowboy is a way better partner. I can’t even say sidekick. He’s an equal. I also gotta note that they share a hotel room and lay around in their underwear. I don’t think there’s a J. EDGAR thing going on here, but you never know.

Then they make boobie traps with grenades, crash a big bulldozer into the side of a cabin, etc. There’s a great slo-mo shot of two people on fire flipping through the air after a motorcycle explosion. Good stuff. Because of touches like that SNAKE EATER III is not bad… his not bad.

Lorenzo Lamas
This entry was posted on Monday, April 30th, 2012 at 12:38 am and is filed under Action, Reviews. You can follow any responses to this entry through the RSS 2.0 feed. You can skip to the end and leave a response. Pinging is currently not allowed.