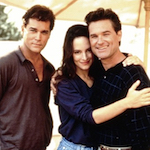 When they call the cops, officers Roy Cole (Roger E. Mosley, HIT MAN, THE MACK, McQ, LEADBELLY, THE JERICHO MILE) and Pete Davis (Ray Liotta, two years and two projects after GOODFELLAS) respond. I love the way Kaplan and d.p. Jamie Anderson (PIRANHA) zero in on Pete reacting to the story, immediately showing great concern and protectiveness for Karen, and managing to touch her when she almost steps on glass. He’s obviously got eyes on her, and the way Roy says, “Hey – I know what you’re thinking” as they’re leaving, you get the idea he’s done that sort of thing before. END_OF_DOCUMENT_TOKEN_TO_BE_REPLACED

I have to tell you, I really struggled to get through this one, and considered turning it off and not reviewing it. Keep in mind that I already made it through MANNEQUIN: ON THE MOVE, SUBURBAN COMMANDO and PROBLEM CHILD 1 & 2 for this series. This is a much classier production than any of those, with all the period costumes and nice cinematography by Lajos Koltai (István Szabó’s MEPHISTO, WHITE PALACE) – there are some nice looking, atmospheric scenes, like an eerie outdoor shootout in the fog. But it’s empty and soul-less and boring as shit and not in an interesting way at all. END_OF_DOCUMENT_TOKEN_TO_BE_REPLACED