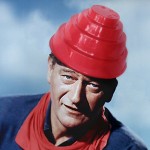 In the movie McQ, John Wayne plays McQ, a cop trying to find out who killed his partner and why. I’m not sure if McQ is short for McQuaid or McQueen, or if it is his real name like McG. Actually, they usually just call him Lon.

Actually, it’s not like DIRTY HARRY. It’s a little more like MAGNUM FORCE because it turns out the other cops are dirty and there’s a coverup. But still it’s not the same type of movie, because instead of the liberal West Coast port city of San Francisco it takes place in my beloved liberal West Coast port city of Seattle. And instead of a funky Lalo Schifrin score it’s a funky Elmer Bernstein score. So it’s totally different. 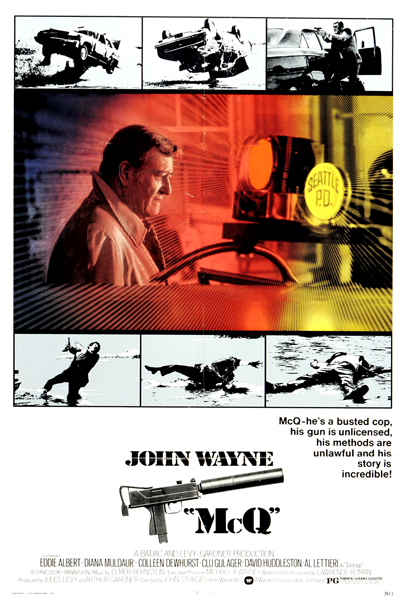 McQ himself is definitely a little like Harry Callahan, he hates bullshit and gets a kick out of breaking rules. There’s a scene where a hippie at the police station calls him “pig” and dares him to shoot him. McQ seems like he’s just gonna ignore it but suddenly he kicks the guy in the leg making him buckle over in pain. When another cop asks what happened he says “he bumped into a chair” and walks away, leaving the cop to wonder where this invisible chair is that the guy bumped into. Somehow in movies we can laugh at police brutality. But only in real movies, not home movies.

Maybe I shouldn’t call them hippies, they’re more like yippies, radical political guys that 25 years later would’ve been at the WTO protests. The cops in this movie call them “militants.” They seem like pricks and I’m pretty sure McQ hates them but actually they didn’t do anything, the dirty cops are using them as a scapegoat for their own crimes. So even though I bet McQ is a republican the movie isn’t necessarily. Kind of like MAGNUM FORCE again.

And just because it’s John Wayne, McQ comes off very different from Harry Callahan. He’s in his late ’60s, somehow not retired, so he just seems more old fashioned and a little more of a teddy bear. He’s divorced and lives in a houseboat beneath the Aurora Bridge, but he still sees his daughter (who appears to be much older than she’s playing, and dubbed over by a different actress – a weirdly shitty touch in an otherwise well-made movie). McQ has such a good relationship with his ex that he is able to borrow $5,000 from her new husband, no questions asked. Then he uses it to bribe a pimp named Rosie (Roger E. Moseley) at the Supersonics game. (Unfortunately they don’t show him at a real game, just in the concessions area at what was then The Coliseum, now Corporate Sponsor Arena.)

McQ is a tenacious bastard though. You know how in these post-Harry cop movies you always expect the “hand over your gun and your badge” scene? Here when they tell him he’s stuck at a desk he instead hands over his gun and badge and they beg him to reconsider. He “goes into business as a private eye” only to take on himself as his first client. That’s his way of continuing to investigate the case he was kicked off of.

Now that I think about it, this guy’s methods are just as out-of-line as Dirty Harry’s, but because he’s John Wayne it seems like you’re not supposed to notice he’s dirty. Just like you weren’t supposed to notice he shouldn’t’ve been killing all those Indians. But I can’t deny it’s fun to watch his Unorthodox Methods. He ambushes a druggie on the street to steal dope from him, then uses it to bribe one of his partner’s old snitches. When he sees a hood going into a bathroom he goes in and beats the hell out of him. The guy’s bodyguards hear the scuffle too late, they run over to the door as McQ comes out saying “He’s taking a shower,” and then they find their boss laying in one of those trough urinals. The shit he’s doing is wrong, but he’s up against other cops doing a massive cocaine scheme and murdering other cops to cover their tracks, so in this situation McQ is the good cop, they are the bad cop.

If you like this kind of movie, and I know I do, this is pretty good. But I’m not gonna lie to you. It’s not great. It’s pretty slow. It’s no DIRTY HARRY. It does pick up for some good chase scenes. For the climax there is a high speed car chase on a beach over on the coast somewhere. I don’t think I’ve seen a chase like this before – there are no people around, no fruit carts or gas trucks, just two cars hauling ass across sand, splashing salt water all over each other and having to use their windshield wipers alot.

Of course, this movie has an extra appeal to me that’s not gonna affect most of you, because it’s cool to see all this Seattle scenery in a John Wayne cop movie. I don’t think they ever show the Space Needle or even mention that they are in Seattle, but there are many recognizable spots. For somebody from Seattle it’s a novelty to watch a car chase and see the yellow restroom-style tiles of the Mercer Exit tunnel.

When that guy Skander Halim wrote a comedy script about me a while back I was kind of insulted by the way he portrayed Seattle in some parts. It seemed like he didn’t think it was a real city, to him it’s just some yuppie paradise where everybody is obsessed with foofy coffee drinks. Now I admit, a whole lot of people here do drink their fancy coffee, you do see alot of that. I’ve been to other places where coffee is fuel for the working man, a brown sludge harvested from the earth by the Dunkin Donuts corporation, best drunk from the lid of a thermos. Here we have an organic espresso shop/stand/bar every couple blocks, not to mention the corporate chains, the Starbuckses within Starbuckses and Seattle’s Best Coffees (owned by Starbucks) and Tully’s. But no Dunkin Donuts. Here nobody remembers Working Man’s Coffee. You’d have to say “I’d like an Americano” instead of “one coffee, two sugars.”

Well I don’t think McQ would ask for an Americano, and he wouldn’t know the difference between tall and grande, he would just want size medium. And there are many of us like that in Seattle. But Seattle has rubbed off on McQ, you can see it. He lives on a boat, he must love the sea and nature and shit, and doesn’t give a shit if the other cops think his lifestyle is weird. And where else but laid back Seattle would The Duke be on such good terms with his ex-wife and her husband? He’s not trying to fit some formula he’s just trying to get through life. If McQ is happy living by himself on a boat and letting bygones be bygones you can’t tell him what to do. This is Seattle.

I tried to tell Skander Seattle is like any other city, yeah there is the yuppie part but then there’s the rest of it, there’s the pawn shops and the stairways that smell like piss and the grey industrial areas and the drug dealers at the bus stops. Today in one bus trip I heard a fifteen minute uninterupted yelling tantrum, saw a flying kick knock over a young man’s groceries, watched a brief police chase of the kicker, and heard an argument where a mentally ill woman accused a guy of devil worship because he rolled his eyes at her. And none of them were holding lattes.

I think I told Skander to watch STREETWISE and AMERICAN HEART. If I had known about this movie though I would’ve told him to watch this. If John Wayne can be a cop in Seattle, and beat up a dude and leave him in a urinal trough, then we must not all be sissies.

John Sturges John Wayne
This entry was posted on Sunday, May 27th, 2007 at 8:04 pm and is filed under Action, Crime, Drama, Reviews. You can follow any responses to this entry through the RSS 2.0 feed. You can skip to the end and leave a response. Pinging is currently not allowed.