Roger E. Moseley plays Hudie Leadbetter, who we first see as a grey-haired old man in prison. Some white musicologists, Professor Lomax and son, are going to prisons recording “negro folk songs” for the Library of Congress archives. Leadbelly tells them he knows alot of songs, some he learned and some he made up, and as he begins to sing and talk about his life it flashes back to when he was young and tells his life story, how and where he learned these songs or why he made them up. 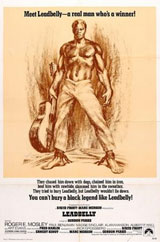 Man, you want an escape from the standard musician biopic formula, this is it. The only fame and fall from grace is when he’s popular on a street that later becomes a ghost town. There’s no decline into drugs – he drinks and fights the whole time, it’s his way, not his downfall. It does have the womanizing, but he never tries to stick with one lady, so we don’t get the marital strife scenes or nothing like that.

No, it’s kind of more like I pictured from the cover. He’s a guy who goes around playing his guitar, gets in some gun and knife fights, does multiple prison bids, escapes from a jail, faces down racists (sometimes boldly, sometimes biting his tongue), and of course singing songs in brothels, bars, streets, trains, prison yards and governor’s mansions. I thought Moseley did a great job singing the songs until I saw on the credits it was somebody else’s voice. So he did a great job pretending to sing the songs. They’re nice songs too. Some are bluesy, some country, I don’t know where you’re supposed to draw the line. But the way the songs tie in with the story it’s almost a musical. And it turns out that driving, acoustic guitar riffs work well for chase scenes (he does more running from dogs than Sweetback).

My favorite scenes are when he gets in guitar duels. He gets arrogant and starts egging people on until they challenge him. He gets real competitive about it and it makes him less likable. But then he also has this habit of going from tense confrontation to hearty laughter. So one second he’s about to knife a blind man on a train, next thing him and Blind Lemon are partners traveling around together playing music.

The other defining aspect of his character is the way he struggles between wanting to entertain people and not wanting to be a minstrel. The most crucial scene is when he’s an inmate and they send him to perform for the governor. He seems a little unsure about it but he starts to sing about why the governor should set him free. The whites all laugh and in real life this is how he got pardoned, and by a governor who had run on a no-pardons platform according to my sources (well, Wikipedia). It’s easy to imagine a white director doing this scene as a fun time and a great victory – he has the balls to sing this clever song and it convinces the governor. But Parks plays every second as torture. This guy is gonna set him free, but he’s a racist slob and doesn’t even look at Leadbelly as a human. Leadbelly wins his freedom not just by wits but by plugging his nose and plunging into humiliation. Then the governor throws him a half smoked cigar (on the ground) as if that’s a great gift. Leadbelly picks it up but uses it to secretly burn his hand. As if the pain of smiling and dancing for this asshole is worse. When all is said and done he’s been promised a pardon at the end of the governor’s term, but he’s not happy. When another inmate criticizes him he says he just did what the situation required, but he also beats the guy up. So obviously it’s a sore spot. He’s just prostituted himself and his music. But he did what he had to do.

I can also imagine a version of this movie where getting his music recorded is portrayed as the happy moment when Leadbelly is finally a success. The credits do thank Lomax for “discovering” Leadbelly (like a scientist discovers a new species of flower or bug). But Parks portrays it as another humiliation. Leadbelly decides that cataloging his songs is like putting pins through butterflies, and that it means he’s gonna die. He doesn’t need to be “discovered,” he needs to be free.

You too can discover Leadbelly… on DVD. You might have to get it from hkflix or somewhere though, this doesn’t seem to be a commercially available movie yet. It can’t be pinned down. Instead it just travels around singing songs and fighting a blind guy on a train (metaphorically).

Gordon Parks Sr. music biopic
This entry was posted on Wednesday, May 27th, 2009 at 2:28 am and is filed under Drama, Reviews. You can follow any responses to this entry through the RSS 2.0 feed. You can skip to the end and leave a response. Pinging is currently not allowed.