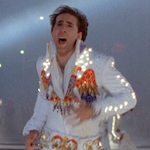 Betsy doesn’t want to wait anymore, and gives him an ultimatum that she says isn’t an ultimatum, so he decides she’s right and that they should take a vacation to Las Vegas, have some fun and elope. 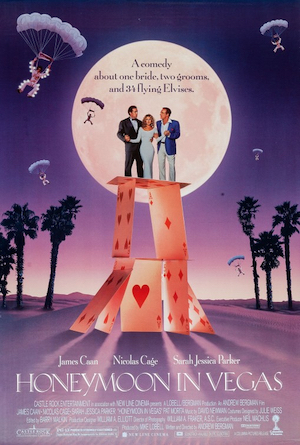 Problem: legendary professional gambler Tommy Korman (James Caan, THE DARK BACKWARD) sees them in the lobby at Bally’s and thinks Betsy looks exactly like his late wife. (I think it’s okay to interpret it as one of those reincarnated love stories like BLACULA or BRAM STOKER’S DRACULA.) He’s a guy who gets whatever he wants (hotel manager Tony Shalhoub [BARTON FINK] even kicks the president of Brazil out of the suite he wants to stay in) so he enacts a plan to steal Betsy from Jack.

Of course it hinges on Jack being a horrendous doofus. Betsy wants to find a chapel and get married right then, but Jack convinces her to wait in the pool for (what turns out to be more than) two hours so he can accept Tommy’s invitation to a poker game. Soon after Jack winds up $65,000 in debt, Tommy reveals his play: let me spend the weekend with your girlfriend and we’re even.

It’s painful and pathetic when Jack explains the situation to Betsy, but she agrees, wanting to protect him. There are no expectations of prostitution, and Tommy explains everything about her looking like his wife, so she feels sorry for him. Also he’s rich and connected so he’s able to take her to shows and they just talk and have a nice time and the whole thing has made her kinda mad at Jack anyway. 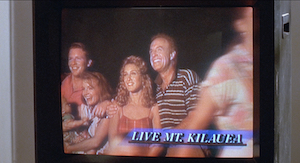 Jack is just supposed to wait around, but then Tommy flies Betsy to his beautiful vacation home in Kauai. I got a kick out of the scene where Jack realizes he has to go after her because he sees her on the news having a great time with Tommy’s family watching a volcano eruption. He sees this as a violation of the terms, flies to Hawaii and tries to find her. Tommy’s right hand man Johnny Sandwich (Johnny Williams, who played Johnny Roastbeef in GOODFELLAS) keeps an eye on him and a goofy cab driver (Pat Morita, COLLISION COURSE) intentionally wastes his time by bringing him not to Tommy Korman but Chief Orman (Peter Boyle, KICKBOXER 2: THE ROAD BACK), a weird (white?) indigenous leader who’s really into musicals.

Meanwhile, Tommy – who has up to this point seemed honorable – lies about the bet, convincing Betsy that Jack himself suggested using her to settle the debt, and also exaggerated the size of it. And then she agrees to marry Tommy (!?), so they fly back to Vegas (the only place where marriage can happen).

You probly know, since I knew it, and since it’s the fuckin tagline on the poster, that there’s a thing about Elvis impersonators in the movie. They’re having a convention at Bally’s and the movie is extremely tickled by the concept of Elvises of different races and cultures – Indian Elvises with turbans, a Black Elvis (not Kool Keith, though – a real impersonator named Clearance Giddens), etc. The one with the most dialogue is Robert Kim (STEELE JUSTICE), who is credited as, I’m afraid, “Oriental Elvis.” He takes part in the fateful poker game and keeps annoying everybody by singing Elvis songs. Note that REVENGE OF THE NERDS III: THE NEXT GENERATION beat this movie to the punch with its Asian Elvis impersonator character Steve Toyota.

At the convention there are some different Elvises seen on stage, including a kid Elvis that I joked was Bruno Mars, since I knew he’d been an Elvis and then Michael Jackson impersonator as a kid. But yeah, actually it is Bruno Mars (credited as Bruno Hernandez). So hopefully they will go through with my other joke and put his name and photo on the cover when they release this on 4K. 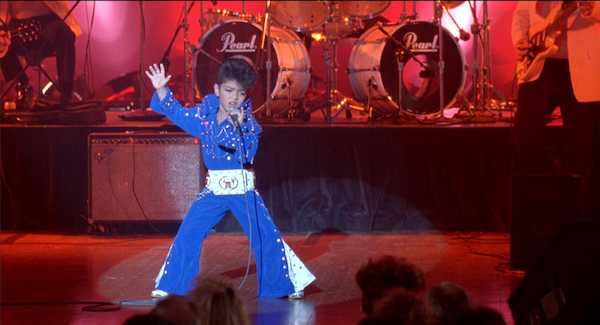 The climax involves a mixup where Jack finds himself on a jet with a team of Elvis-impersonating skydivers. Can you believe it? Skydivers. But dressed as Elvis! The idea of different types of Elvis impersonators being funny has definitely worn off its charm in 30 years, assuming it even had any back then. But I do think it’s kind of cool that the soundtrack is mostly Elvis songs, both original recordings and covers. Bruce Springsteen does “Viva Las Vegas,” Dwight Yoakam does “Suspicious Minds,” Willie Nelson’s version of “Blue Hawaii” works really well when Tommy and Betsy first arrive there. (Also there’s Bryan Ferry, John Mellencamp, Travis Tritt, Vince Gill, Amy Grant, Billy Joel, Trisha Yearwood, Ricky Van Shelton and Bono. Not my favorites, but conceptually sound.)

I also like that Cage gets to put on an Elvis jumpsuit. It’s pretty weird that he later married Elvis’ daughter. There are lots of little things that foreshadow later Cage movies: a scene at a Vegas boxing match like SNAKE EYES, causing a big scene about a line taking too long as in MATCHSTICK MEN, and of course he later got a best actor Oscar for another movie about having a bad time in Vegas. (Not NEXT. The other one.) 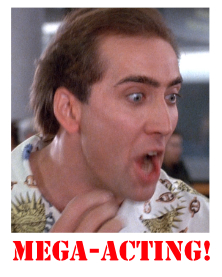 Cage being impatient with everybody and growing increasingly unhinged as the situation worsens is most of the fun, but there are some funny jokes and lines here and there too. I especially like him dealing with Morita’s distractions, and there’s a part I’ll probly start quoting where the cabby’s jibber jabbering about the women on the island and Jack brushes him off by saying, “That’s great news.”

Caan is as good as always, playing up the nice old widower who has it all in a way where you can understand why Betsy would be okay spending time with him for a while. Parker gives a believable performance, very sincere, but I’m afraid that makes the character seem like an idiot. Pressuring her boyfriend into marrying her when he clearly isn’t ready is a bad choice, but one people often make. And agreeing to fly with an older rich guy she just met to Hawaii to get Jack out of a gambling debt is understandable as the premise of the movie and something she does against her better judgment. But to then believe his lies and agree to marry him is too much. That broke me. These are not reasonable people, so I kinda wish she didn’t play her like one. 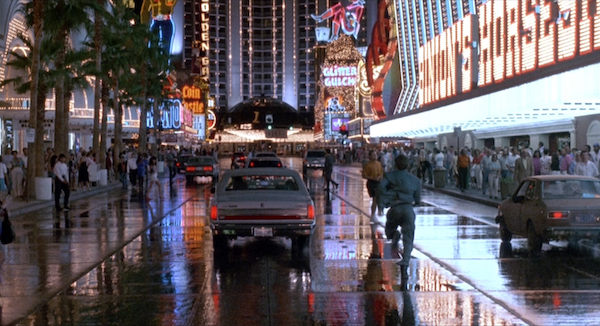 The Vegas scenes are mostly at and around Bally’s, which I’m not so familiar with. I was glad there was one little part where Jack goes to Fremont Street. Gotta get those lights in there. I wonder what would’ve happened if this had been the same night when Wayne Salinsky blew up the kid? Then Jack probly would’ve stayed and watched that, not seen the volcano thing on the TV and not gone to Hawaii. So it was a close call.

(Oh, weird – it just occurred to me that this and HONEY, I BLEW UP THE KID both have animated opening credit sequences by Bob Kurtz. I guess that’s the guy you go to if you need a cartoon at the beginning of a summer of ’92 release set in Vegas.)

HONEYMOON IN VEGAS was written and directed by Andrew Bergman, his followup to THE FRESHMAN and (as a writer) SOAPDISH. He was a veteran (if not hugely prolific) writer of comedies, having gotten his start writing the screenplay that became BLAZING SADDLES. Later, when recruited to make a sequel to FREEBIE AND THE BEAN, he instead wrote THE IN-LAWS. People liked it and there was a remake and everything but it sounds like he got in the way of there being a whole series of FREEBIE AND THE BEAN movies, so he’ll have that to answer for when he reaches the Pearly Gates. He also wrote OH, GOD! YOU DEVIL and FLETCH.

I guess the movie was remembered fondly by somebody, because in 2015 it was adapted into a Broadway musical with a book by Bergman and songs by Jason Robert Brown (who also worked on stage musical adaptations of URBAN COWBOY, THE BRIDGES OF MADISON COUNTY and MR. SATURDAY NIGHT). Tony Danza played the James Caan role. According to The Hollywood Reporter the musical received “mixed-to-positive reviews, with a few out-and-out raves, including from The New York Times” but “momentum from the show’s well-received tryout run at New Jersey’s Paper Mill Playhouse in 2013 never materialized,” so it closed after three months. Maybe it’s because they couldn’t use Elvis songs. How do you tell a story with so much Elvis and so many songs and none of the songs are Elvis songs? Or even Willie Nelson?

COMING TOMORROW (if I finish on time): The thrilling Weird Summer conclusion! 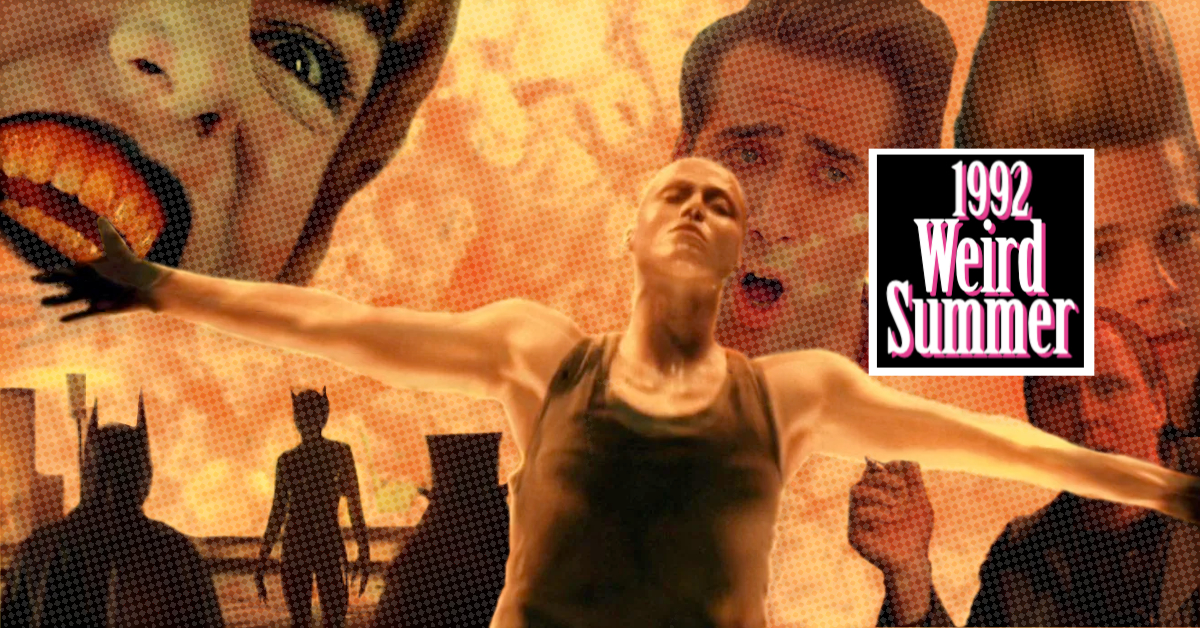 Andrew Bergman Bob Kurtz Bruno Mars Elvis James Caan Johnny Williams Las Vegas mega-acting Nicolas Cage Pat Morita Robert Costanzo Sarah Jessica Parker Tony Shalhoub
This entry was posted on Thursday, September 29th, 2022 at 10:41 am and is filed under Comedy/Laffs, Reviews, Romance. You can follow any responses to this entry through the RSS 2.0 feed. You can skip to the end and leave a response. Pinging is currently not allowed.

7 Responses to “Honeymoon in Vegas”