Man, you guys were right about VAMPIRE’S KISS. You really can’t judge a DVD by its cover. I always imagined it was a typical dumb ’80s comedy, but it’s something totally different. The year was 1988, Nic Cage was in his early 20s and hungry – so hungry he ate a live roach on camera. And appparently it wasn’t in the script, it was his idea. Planned in advance though – he didn’t improvise it. That would’ve been even more impressive. But even separate of this roach-eating what this is is a grade-A example of mega-acting.

What is mega-acting? If you didn’t read the BAD LIEUTENANT PORT OF CALL NEW ORLEANS review you’ll need an explanation. Mega-acting is the term I decided to use instead of “overacting” when I mean it as a compliment. “Overacting” means you’ve gone too far, you have too large an amount of acting, like overfilling a glass and it spills all over the place and you have to clean it up. Mega-acting doesn’t spill because it’s a deliberate stylistic choice. It may be absurd, cartoonish, exaggerated, operatic, but not an accident. You didn’t overfill the glass. You purposely used a huge stein. Classic examples of mega-acting include Nic Cage as Castor Troy in FACE/OFF, Nick Nolte in HULK, Nic Cage in THE WICKER MAN.

VAMPIRE’S KISS is the story of some asshole literary agency executive who decides that one of his one night stands was a vampire who infected him. But he’s actually just nuts. It’s played completely straight with some nice cinematography and a classy score, so for a while I was wondering if it was supposed to be a serious movie before Cage put his spin on it. But it gets pretty hilarious to see him interact with people the more far gone he gets. It’s not Cage fucking over a serious script, it’s just a very pure movie dedicated to the selling of this one simple joke.

One of my favorite parts is when he approaches a woman at a club while wearing his cheap plastic fangs and starts doing weird Nosferatu gestures to her. And because he’s so over-the-top and she’s so high she thinks he’s being cute and smiles at him. It goes surprisingly well until he bites her.

He’s such an absurd character even before he thinks he’s a vampire though. He talks in some weird accent between fake British and surfer dude. The DVD actually has a Nic Cage commentary track and he explains that the character is putting on an affectation that he thinks will impress people. (I guess that’s what Damon Wayans was doing in BAMBOOZLED, huh?)

There’s definitely some AMERICAN PSYCHO in here, the way he’s an egomaniacal yuppie in New York of the ’80s, treating his secretary like shit, killing people, losing track of reality, wearing nice suits, living it up. Also it’s a little like MARTIN with its vampire delusions. Both those movies rely on great lead performances just like this one does, but there might’ve been other actors who could’ve done other interesting interpretations of this characters. This one I can’t imagine existing with anybody else. It wouldn’t even come close to working.

Here’s an example. Watch how Cage goes from low key to complete insanity in one inane conversation.

The entire alphabet! And then he does what he calls on the commentary track Mick Jagger poses. That scene might’ve been kinda funny on paper, but not in the same way the final scene is. What’s in that scene cannot be written. You can’t capture Nic Cage on paper. You gotta uncage him.

To be frankly honest I didn’t find all of VAMPIRE’S KISS to be completely captivating. It’s more something I appreciated and respected than was consistently entertained by. But it also kind of feels like the type of thing I could end up loving if I watched it again some time down the line. It’s entirely built around Cage’s performance, but that performance is so unique it makes the whole thing pretty fascinating.

I didn’t laugh all that much while watching it, but I’m laughing just thinking about it now. It’s just so great to see him go for broke for such an extended period. At the beginning he’s just this jerk with an obnoxious accent, later he starts losing his shit and literally jumps on top of his desk while yelling at Maria Conchita Alonso, after he buys the fangs he starts contorting his face and body the way Max Schreck did in NOSFERATU, by the end he’s a filthy, mumbling homeless man, he’s running around New York screaming “I’m a vampire! I’m a vampire!” and I swear it sounds just like guys I hear outside of my apartment sometimes around 3 am. Except those guys also have keyboards. I never want to give them money because they might use it to buy batteries.

The commentary track (recorded in the late ’90s) is very informative. Cage laughs about his mental state at that age but also seems very proud of what he was trying to do. In one scene where he tries to commit suicide but the gun doesn’t work (it’s filled with blanks – just like in CRASH!) he lets out a cry that on the commentary he explains was “boo hoo.” He says he was trying to see if he could get away with actually saying “boo hoo,” and the answer was yes, he could.

After doing movies like NATIONAL TREASURE one through two it’s easy to forget about Cage’s genius and just think of him as another Hollywood superstar making dumb movies. But most Hollywood superstars, even the good ones, would never think it was a worthwhile goal to try to sneak the phrase “boo hoo” into a crying scene. In fact, they wouldn’t even think it was a bad idea because they would never think of that idea at all. I think if you consider that attitude, then consider the magic that Cage pulled off more recently in BAD LIEUTENANT, you have there a strong argument that he knew exactly what he was doing in THE WICKER MAN. He’s not oblivious. He’s just mega. 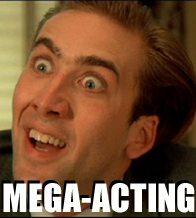 mega-acting Nicolas Cage vampires
This entry was posted on Friday, December 18th, 2009 at 1:46 am and is filed under Comedy/Laffs, Reviews. You can follow any responses to this entry through the RSS 2.0 feed. You can skip to the end and leave a response. Pinging is currently not allowed.