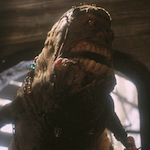 MAD GOD is a bizarre stop motion journey through the large intestine of a nightmare. It’s hard to describe (or know) what it’s about, but its version of the STAR WARS opening scroll is an actual scroll inked with a menacing threat from Leviticus. It ends, “I WILL MAKE THE LAND DESOLATE SO THAT YOUR ENEMIES WHO SETTLE IT SHALL BE APPALLED BY IT. AND YOU WILL SCATTER AMONG THE NATIONS AND I WILL UNSHEATH THE SWORD AGAINST YOU. YOUR LAND SHALL BECOME A DESOLATION AND YOUR CITIES A RUIN.”

The God of this movie may or may not be a weird priest played by REPO MAN director Alex Cox, one of a few live action characters seen briefly. He’s the one who sends a character I know from reading is called “The Assassin” – a man in a gas mask who is lowered in a diving bell past towers and rocks and layers of dinosaur bones and stone idols to a war-torn wasteland. He seems to be on a mission to set off a suitcase of dynamite deep in the earth, and most of the movie is a long journey downward, following an ever-crumbling map.

People who demand a strong narrative will melt into a puddle and be lapped up by weird crab monsters with human teeth. There’s a story here, but it’s all dream logic, told with mood, atmosphere and symbolism, not words. There’s virtually no human language that can be heard clearly – just some grunts like in those original Aeon Flux shorts. The score by Dan Wool of Pray For Rain (Cox’s guy since SID & NANCY) is crucial, but so is the sound design by Richard Beggs (TUCKER: THE MAN AND HIS DREAM, CHILDREN OF MEN), which helps bring life to these inanimate objects. It’s all ticking clocks, whirring servos, tinkling music boxes, puttering engines, rattling cages, crackling flames, clicking gears, flittering wings, collapsing earth, air raid sirens, explosions, gunfire, gnomes chirping like Jawas, babies crying in the distance, and most of all the sounds of the Assassin’s thick coat shifting around, and his boots crunching into dirt.

After some time on what seems to be the bottom, the Assassin falls through the ground to an understructure of pipes, wiring and tunnels, and finds a filthy lab where animals are being cruelly experimented on. He looks and just shuts the door.

On that level he finds a platform elevator that lowers him even further, past the giant mutant head drinking the slime pouring out of the row of people being electrocuted above, past inflating and deflating bladders, to an injection mold machine churning out hundreds of wobbly human-shaped hairballs. Some stagger to a hole that burns and devours them, others do manual labor manufacturing monoliths and maggots, or slicing or milking hideous mutant walrus creatures, until they’re flattened by steamrollers or falling objects, and then piles of their bodies are excavated and transported away by rail. 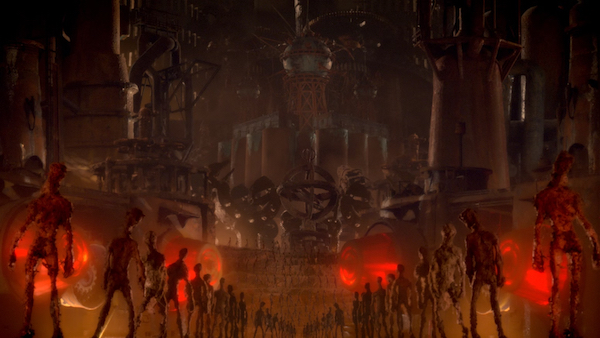 There’s something existentially horrifying about the way they just keep walking until they’re casually splatted by machines or flying monoliths or stomped into goo by vicious blob monsters. Those that survivor are whipped and herded to a giant screen showing bad teeth and a veiny eyeball while baby sounds are broadcast over loudspeakers.

And then the Assassin finds a stairway. Going down, of course. At the bottom he finds a giant pile of briefcases. It did not occur to me until reading about it that maybe these belonged to all the Assassins who failed before him. He sets the timer on his explosives, but a biomechanical beast drags him away and then it doesn’t go off.

On my first viewing I thought the story changed in the next segment, where a red curtain opens and an audience is delighted by the silhouettes of monsters tearing open a corpse behind a white screen. I didn’t realize this corpse was our departed Assassin. In a sort of dollhouse of identical cross-section hospital rooms, a doctor gorily tears him open, sloppily pulling out guts and slimy blood and jewelry and books (pretty sure I saw the Lee Iacocca book in there!?) until he finds a nasty larval creature with a giant mouth crying like a human baby, which a nurse carries to a large being in a plague doctor mask. (I’m not even sure how this character was created, but its enormous mobile-like headdress and fluttering, tentacle-like ribbons are hypnotic to look at.) 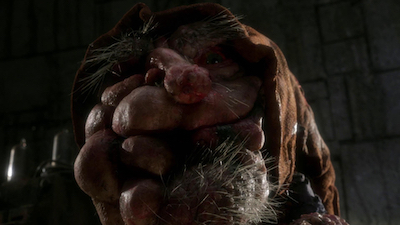 The plague doctor floats along and carries the baby on a journey to a profoundly repulsive-looking troll creature. There’s also a second Assassin sent by Cox’s character, who is credited as “the Last Man.” It concerns me that The Last Man wears a yarmulke, but I have not been able to find anything about its intent or what anybody thinks it could mean.

The second Assassin hotwires a jeep and has a long drive through combat zones until he finds a sort of inverse pyramid which he slowly SORCERERs his way down. Always downward.

I enjoy stop motion animation in general, and this is an innovative style with numerous monstrosities unlike anything you’ve seen before, and settings that just drip with atmosphere. Literally, sometimes, when the light reflects on the edges of some gnarly surface with slime oozing down it. Sometimes there’s lightning strikes, exploding mortars, or pterodactyl like creatures circling above. These places look evil, but kinda beautiful, often lit only by small lights such as the lantern in the Assassin’s hand. It’s beautiful and not something that could’ve been done in the Rudolph days, before LED lights and digital photography. 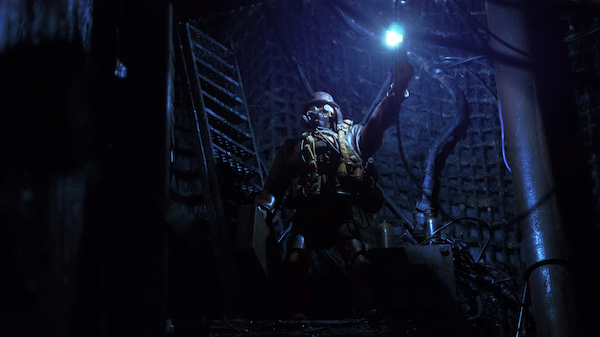 At the troll guy’s place there’s a brief respite from darkness when he dumps a bucket of maggots into a rainbow colored fungus garden to fit some colorful creatures. The music turns comically happy and lounge-y. 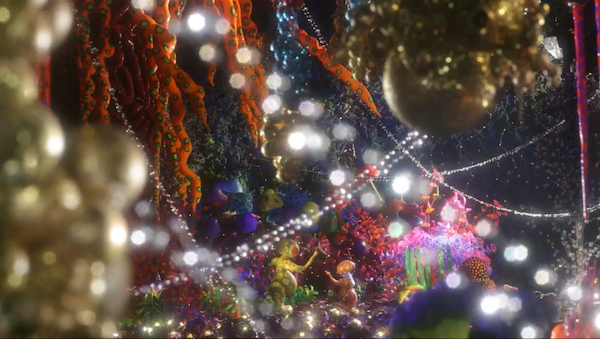 But then he opens a gate to let a spider-thing in to eat one of the creatures. And he laughs about it. What a dick.

There are many shots with the Last Man or the doctors that are live action characters, often made to look flickery to fit with the puppets. It mostly works, though I would prefer if they had all been animation. On the other hand, I don’t know if we wanted to wait another 10-20 years for that. 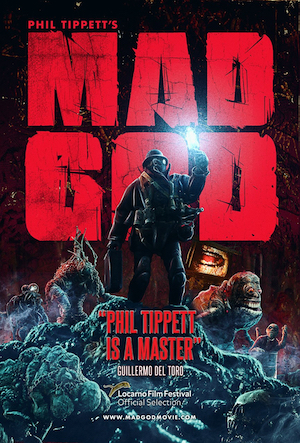 The director – and writer and production designer and producer and many other things – is Phil Tippett. Had I not known, it would not have been surprising to learn this was a long-in-the-works passion project done on the side by this genius who worked behind the scenes on many beloved mainstream genre movies. Tippet is the legendary special effects pioneer and animator behind the chess set in STAR WARS, the fish in PIRANHA, the tauntauns and AT-ATs in THE EMPIRE STRIKES BACK, the Rancor in RETURN OF THE JEDI, the dragon in DRAGONSLAYER, the minecarts in TEMPLE OF DOOM, the monsters in THE EWOK ADVENTURE, the Dark Overlord in HOWARD THE DUCK, ED-209 in ROBOCOP, the Ebersisk in WILLOW, and (might as well throw this one in there) the Rancor rip off in CONEHEADS. When Spielberg decided to use CG instead of Tippett’s go-motion in JURASSIC PARK, he stayed on as “Dinosaur Supervisor,” a big part of making their behavior so convincing.

At that point he thought he was obsolete, but Tippett Studios expanded into digital effects. He recently told The Fabulist, “I’m terrible with the computer. As far as I ever went was with Word, and that was that. But luckily, by that time, I kind of got kicked upstairs as a supervisor and would help the directors; I saw myself as a choreographer for the directors.”

In that capacity he worked on DRAGONHEART, STARSHIP TROOPERS, EVOLUTION, the TWILIGHT movies, and more. So he’s pretty good at what he does, in my opinion.

Would you believe that MAD GOD was completed last year, but he started it while he was working on ROBOCOP 2!? Reportedly he set it aside during JURASSIC PARK, but over the years the younger FX artists at his studio would come across footage in the archive, or the sets and puppets in storage, get interested and want to animate scenes for it. In 2010 he raised money to finish it through Kickstarter, knowing a studio would never get behind what he was doing. (Imagine a THIEF AND THE COBBLER scenario where the Weinsteins buy it and dub the assassin with Martin Short or Kevin Hart or somebody riffing.)

Left to his own devices Tippett is as much an artist as a craftsman and technician. In the Fabulist interview he talks about basing it on his own dreams, and says, “I became kind of a method director, and I couldn’t tell the difference between me and the movie, and I ended up resenting it.” He describes it taking a psychological toll on him like Coppola after APOCALYPSE NOW or Carl Jung after his Red Book. He told Mark Maron in a really good interview on WTF that when he was done he was so out of it his friends had him committed to a mental hospital, and that he’s lost his once uncontrollable desire to work with his hands.

Yep. That checks out. 30 year passion project that got its director committed. That’s what this reminds me of.

Other things it reminds me of:

*ERASERHEAD, the works of Jan Svankmajer and the Brothers Quay, and the other most otherworldly shorts I used to see in animation festivals. But it’s bigger in scope, and with fewer creepy dolls. (I believe there’s only one. Touching itself inappropriately, for some reason.)

*One of those movies-within-a-movie that you never see more than a glimpse of, but hear about how it’s the most daring thing ever made, or that it’s literally cursed and will kill the audience or destroy the world if viewed.

*Not the overall style, but the mix of repulsiveness, metaphor and mysticism made me think a bit of Alejandro Jodorowsky. In particular I thought of HOLY MOUNTAIN’s alchemy scene as I watched some of these processes taking place. The weird baby taken out of the corpse of the first Assassin is carried all the way to this troll guy, who puts it in a press and squooshes it into slime, which drips down a tube and is processed, molded into a silver brick, then mortared with a bone into glitter that when blown into the air… causes a new Big Bang, I believe? And life and evolution and cities and war and destruction all over again.

Make of that what you will. That’s what you do when you watch this. You make of it what you will. It’s now circulating in limited release (I’m sure it would be amazing on a big screen, and easier to let wash over you) and streaming on Shudder.

This is actually Tippett’s second feature directing credit. The first was STARSHIP TROOPERS 2: HERO OF THE FEDERATION. I thought it was pretty good DTV at the time. Some day I’ll rewatch it, but I’m pretty sure it’s no MAD GOD.

On WTF he said that he originally recruited Dead Kennedys bassist Klaus Flouride to do the score, but it didn’t really work for him. It never occurred to me that there would be an ILM-Dead Kennedys Bay Area connection. Maybe he should’ve tried Invisibl Skratch Piklz.

??? Alex Cox Phil Tippett stop motion animation
This entry was posted on Friday, July 15th, 2022 at 4:27 pm and is filed under Cartoons and Shit, Reviews, Science Fiction and Space Shit. You can follow any responses to this entry through the RSS 2.0 feed. You can skip to the end and leave a response. Pinging is currently not allowed.