In one sense Tucker is full of shit. He thinks he can make this car, but he lets people believe he already has. He pushes his sons and trusted collaborators into overdrive to figure out how to build a good-enough prototype in time for the big unveiling. Like a movie trying to make a summer release date. The dream runs into the reality of unforeseen problems and limited time and resources, but he’s happy to just build a thing that looks like the concept art.

Then it comes time to make it for real. Can they really build the engine they described, and get it to fit in the back? Do the innovative safety features they bragged about actually work? Can they bring it in at a reasonable price when politicians in the pocket of Detroit auto makers are jacking up the price of steel? Tucker fights the battle between the original idea and the compromises demanded by the engineers, the uncooperative CEO, the crooked politicians and their friends in the media who try to bust him as a fraud.

Like Coppola, whose wife and daughters have walk-ons in the movie, Tucker surrounds himself with his family. One of his sons (Christian Slater) follows him into the family business, so it’s hard not to think of Coppola’s late son Gio, who the film is dedicated to. Many important business discussions happen in the kitchen, with Tucker’s kids, wife and sometimes dalmatians crammed into the frame. Look how many characters are in a typical scene: 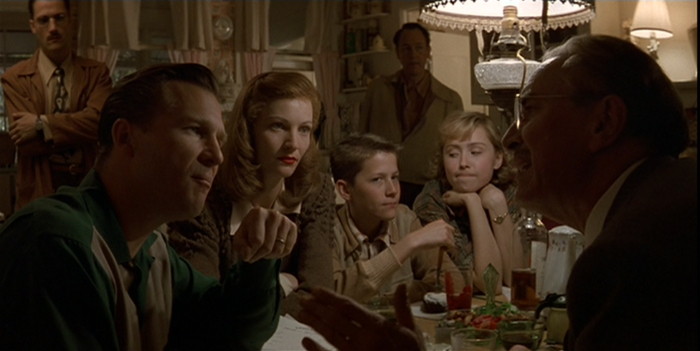 His family are treated as part of the company, and the company are treated as part of his family. It’s a great cast, with supporting players not only including Landau (who received an Oscar nomination for best supporting actor, a category he’d win in for another quirky biopic of a perceived failure, ED WOOD) but Mako and Frederic Forrest as two of his best employees and Lloyd Bridges as his worst enemy in Washington DC. I like that two of the supporting players went on to be in very different car movies: Joan Allen (as his wife Vera) was in DEATH RACE, and Elias Koteas (as designer Alex Tremulis) was in CRASH. 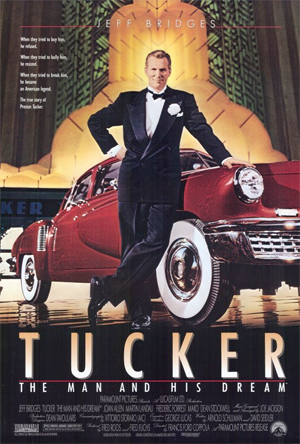 Car-nerd Coppola had loved Tuckers ever since he first saw one as a kid and thought it looked like a rocketship. His dad Carmine actually bought one of the 52 cars that were made, and later on when they were rich Coppola and Lucas each owned two of them. But the movie plays way more like a metaphor than an automobile fetish video. Tucker is the artistic ideal sought by both Coppola and Lucas: the envelope-pushing, rule-breaking dreamer who sees the future and tries to build it in his own way even though everybody tells him it’s impossible. He has his own homespun facility away from the big boys, he surrounds himself with unproven newcomers and talented outsiders, he invents new technologies that nobody else thought of, he gets help from like-minded pioneers (in this case Howard Hughes [Dean Stockwell, TO LIVE AND DIE IN L.A.]).

But Coppola’s experience mirrors Tucker’s more than Lucas’s does. While two of Lucas’s early gambles (AMERICAN GRAFFITI and STAR WARS) paid off well enough to keep the company going for decades, Coppola kept running into snags. In the nine years since APOCALYPSE NOW, his only movies that made a profit were THE OUTSIDERS and PEGGY SUE GOT MARRIED, while ONE FROM THE HEART, RUMBLE FISH, THE COTTON CLUB and GARDENS OF STONE all lost him money (and his studio), and he didn’t have a special effects company or GODFATHER action figures to to cover his losses. No doubt Coppola, at least at times, felt the suits and the backwards-thinkers were out to crush his greatness. Or, as Tucker says in the movie, “I grew up a generation too late I guess, because now the way the system works, the loner, the dreamer, the crackpot who comes up with this crazy idea that everybody laughs at, that later turns out to revolutionize the world…  he’s squashed from above before he can get his head out of the way, because the bureaucrats, they’d rather kill everyone than let them rock the boat.”

TUCKER is light and fun, and Tucker’s attitude is usually so positive that it shines through the dark clouds of failure. Even the high speed police chase that’s usually the moment in the biopic when the legendary figure has turned too reckless and self destructive (see STRAIGHT OUTTA COMPTON) turns out to be a humorous way to prove how good his alleged-to-be-fraudulent cars really perform.

It’s not a movie about telling the dark truth. It opens as a promotional film strip from the Tucker PR department. Commercial propaganda. Much of the look is based on a real Tucker promotional film, as well as optimistic magazine illustrations of the era. It always looks beautiful, and sometimes director of photography Vittorio Storaro can’t help but Vittorio Storaro the shit out of it. I mean, picture in your head how most people light a court scene. Generally not too fancy, right?

Now look at how Storaro lit this one: 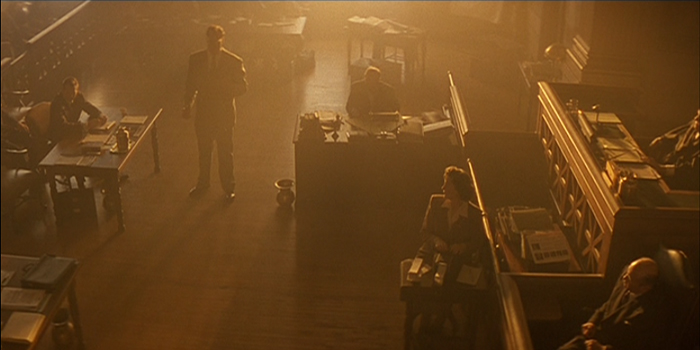 The movie doesn’t pretend to be objective, and the style is not literal. Tucker spins his fedora or himself and seems to role right into the next scene. Split screen phone conversations are filmed together on one set. 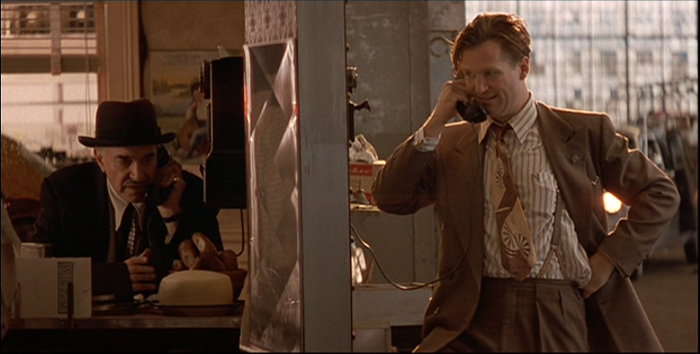 It’s not that surprising to read that when Coppola tried to make it in the ’70s it was going to be a musical. He also described it as an “experimental film” which he compared to MISHIMA. He’d met with WEST SIDE STORY’s Leonard Bernstein to do the music, SINGIN’ IN THE RAIN screenwriters Betty Comden & Adolph Green to write the lyrics and Marlon Brando to possibly star (though he’d also considered Jack Nicholson and Burt Reynolds), and he did ONE FROM THE HEART partly to get himself ready to do TUCKER as a musical. But the financial collapse of the studio from that movie forced him to abandon his plans. 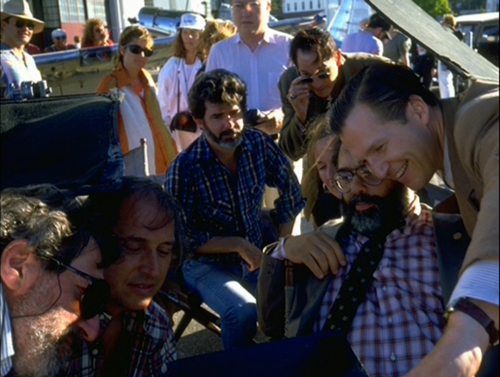 According to The New York Times, it was Lucas who encouraged Coppola to return to the story while they were doing CAPTAIN EO together. He called TUCKER “the best project Francis had ever been involved with,” but found that ”no studio in town would touch it; they all said it was too expensive. They all wanted $15 million THREE MEN AND A BABY movies or CROCODILE DUNDEE PART 73 sequels.” So Lucas put up the $24 million himself (later convincing Paramount to pay for most of it). Coppola had helped Lucas get his early films made, and now the padawan was returning the favor.

Lucas sees himself as a balance to Coppola. ”Francis can get so esoteric it can be hard for an audience to relate to him. He needs someone to hold him back. With GODFATHER it was Mario Puzo; with TUCKER, it was me.” He saw the movie as an inspirational Frank Capra type story, and even tried to get Capra to come on as a producer. That didn’t work out, but he did get Arnold Schulman, who’d written Capra’s A HOLE IN THE HEAD (1959), to do the screenplay (later rewritten by David Seidler [THE KING’S SPEECH, KUNG FU KILLER {2008 David Carradine TV movie}]).

Coppola put his faith in Lucas’s commercial instincts, allowing him to “candy-apple it up a bit, make it like a Disney film.” Later he sounded mildly regretful about it. “I think it’s a good movie – it’s eccentric, a little wacky, like the Tucker car – but it’s not the movie I would have made at the height of my power.”

But, you know, Tucker wanted his bumpers to move with the front wheels along with the headlights, and that didn’t work out. TUCKER: THE MAN AND HIS DREAM is a very enjoyable movie, a traditional take on a novel subject, and a nice reminder of the importance of trailblazers and envelope pushers like Tucker, Lucas, Coppola and any of the guys Kanye West compares himself to all the time. (My dream is for Kanye to become obsessed with TUCKER: THE MAN AND HIS DREAM and sample it and stuff and drive a Tucker Torpedo in a video. But you know what society does to dreamers.)

cars Christian Slater Dean Stockwell Elias Koteas Francis Ford Coppola Frederic Forrest George Lucas Jeff Bridges Joan Allen Lloyd Bridges Lucas Minus Star Wars Mako Martin Landau Vittorio Storaro
This entry was posted on Tuesday, January 19th, 2016 at 11:04 am and is filed under Drama, Reviews. You can follow any responses to this entry through the RSS 2.0 feed. You can skip to the end and leave a response. Pinging is currently not allowed.

10 Responses to “Tucker: The Man and His Dream”