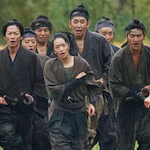 I chose SAMURAI MARATHON, officially a 2019 release, though it came to VOD and disc during quarantine time in 2020. It’s a Japanese language film, based on a Japanese novel (The Marathon Samurai: Five Tales of Japan’s First Marathon by Akihiro Dobashi), with a screenplay co-written by Hiroshi Saito (SAMURAI FICTION) and Kikumi Yamagishi (HARA-KIRI: DEATH OF A SAMURAI), but it’s directed and co-written by Mr. Bernard Rose of London, England. Obviously a samurai movie by the director of CANDYMAN is gonna catch my eye. And I’m sure glad it did because, my friends, I loved this movie.

Though the story is entirely about Japanese characters, the events come as a reaction to westerners. When American Commodore Perry (Danny Huston, who has been in six other Bernard Rose movies, including his 2015 modernized version of FRANKENSTEIN) arrives in Japan to present gifts of photographs, bourbon and guns to the Shogun’s chief minister (Etsushi Toyokawa, BOILING POINT). Seeing the “black ships” and hearing of Smith & Wesson, Lord Itakura (Hiroki Hasegawa, SHIN GODZILLA) of the Annaka clan fears an invasion is more likely than the promised peace treaty. So he calls everyone together for a big announcement. Because he believes “260 years of peace have made samurai weak and undisciplined,” he has decided that every man of serving age will compete in a 36-mile foot race across difficult terrain. The winner will get one wish. Whatever he wants.

(Note: I don’t think he can ask for infinite wishes. Same rules as magic wishes when it comes to that.) 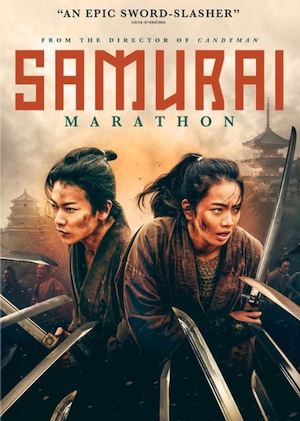 In the time before the race starts we get to know several different characters whose stories we’ll be following. One of them is the Lord’s own daughter, Princess Yuki (Nana Komatsu, SILENCE – yes, the Scorsese one), a talented artist. In the scene where we meet Yuki, her father shuts down her plans to go to Edo. After admiring her beautiful ink drawing of the American ships he lights it with a candle. Then he reveals that he has a dude, Heikuro Tsujimura (Mirai Moriyama), waiting outside to introduce to her as her new fiance. This is all some serious bullshit in my opinion, and obviously the forced marriage is the biggest violation, but the burning of her art – intended to quash her interest in western ideas – is a particularly crushing symbolic attack on her humanity and individuality.

So she decides “fuck this,” cuts her hair, disguises herself as a male and enters the race, not to win and get a wish, but to divert from the route and run away. Yeah, it’s a MULAN move, but one thing Mulan didn’t do was steal her clothes from a guy who tried to rape her and cause a misunderstanding that gets him decapitated. Point: Princess Yuki.

This Tsujimura guy, who I kept thinking looked like Lazar Rockwood…

…is such a bad choice for her husband! He’s one of the few characters in the movie you can’t really root for. I guess he thinks winning the race and getting the wish will cement this “marry the princess” plan, so he tells his pathetic stooge sidekick guys that it will be “best for all of us” if he wins, and they start hassling the guy known as the fastest runner, Hironoshin Uesugi (Shota Sometani, SADAKO 3D) about the importance of him not winning. Poor guy is getting pressured by a politician to throw the race too, but he wants to win so he can use the wish to become a samurai.

There’s also a very sweet story about a little boy, Isuke Fukumoto (Ruka Wakabayashi), who wants to run in the race to be like his late samurai father, so an old retired samurai named Mataemon Kurita (Naoto Takenaka, AZUMI, MANHUNT) teaches him “Namba running” and enters the race with him.

But I think the most dramatic story is that of Jinnai Karasawa (Takeru Satoh, RUROUNI KENSHIN). We learn from a flashback that his family are secret ninjas put in place to spy on the clan for the Shogun. (A nice reminder that these ninjas we’re always so fascinated with are just narcs.) When everybody’s being called for the announcement the assumption is that they must be going to war, so he fakes diarrhea to sneak off and send a coded message to the Shogun. By the time he realizes they’re having a marathon, not a rebellion, the letter has already been sent, so he has to enter the race and then sneak off to try to intercept the message and/or the army it will likely summon.

So the race happens, they all run – carrying their swords, which seems like a real pain! – and each of these different stories unfold as they travel across fields, through forests, up hills. There are secret agendas, attempted shortcuts, etc. I was kind of unclear how whoever’s in the lead knows what route to take, but that’s okay. I’ll ask more questions if I ever have to run it myself.

I really like how Rose satirizes colonialism but also glorifies the idea of wanting to learn from other cultures. The opening scene is really funny because the minister sits stoically surrounded by samurai in fancy traditional armor and you can definitely read a “What the fuck is this shit?” on is his face as the Commodore marches in with a band playing “Yankee Doodle Dandy.” Later the Shogun’s psychotic henchman Hayabusa (Ryu Kohata, GODZILLA: FINAL WARS), disguised as a bandit, sings “Yankee Doodle” to himself and shoots a bunch of guards with the pistols in an attack meant to put down the non-existent rebellion. When he barges into the Lord’s home, Rose doesn’t have to zoom in for us to focus on the little clump of mud that falls from his dirty boot to the immaculate floor. This is the “barbaric” American influence they feared.

On the other hand, Yuki hardly seems corrupted by her interest in other cultures. She just likes drawing exotic things or, like, knowing how to use “western style” running in the race. And being allowed to do what she wants even though she’s a woman.

Some time after the runners have rested at the halfway-point fortress and started heading back, many of our main characters have shared information with each other, learned about the danger heading toward their home and are rushing back to stop it. I have to tell you, I’m not saying this will happen to anybody else, but at the climax of the movie I just started crying. And it’s not sad. It’s just a variety of overlapping emotions, including an elation at the way each of these stories come so perfectly to their conclusions at the finish line of the race. All these different characters, most of whom we’re rooting for, with different hopes and fears and troubles all coming to a head in this moment as a sporting event is concluding. I think it was mostly the beauty of this storytelling mastery that got me, but also maybe it was all the weight of Jinnai gaining an actual loyalty to the clan as he tries to stop the catastrophe he caused in a badass ninja-related action moment. Narrative, emotional and action climaxes all intersecting. Holy shit. The best.

As in many of the great samurai movies, the violence is sparse, but thrilling when it pops off. And there are a few really graphic bleeding and decapitation effects that are not quite like anything I’ve seen before. One thing that is very different from any samurai film I’ve seen is that the score is by Philip Glass! Yes, it is recognizably the POWAQQATSI guy, and the combination of this type of movie and that sound creates a tone I haven’t quite seen before.

If I may have some ending SPOILERS in this paragraph only: the climax just gave me chills, but the scene after that is almost as good. The old man and the little boy, of course, get home after everyone else, and they find a row of dead bodies. It’s a really interesting scene because we know that the battle has already concluded and everybody is as okay as they’re gonna be, so instead of having any suspense like that we are entirely watching these guys believing there’s danger and running toward it despite their ages. And then we get to see their relief that the Lord is safe and he compliments them on having completed the race. Some real My friends you bow to no one shit.

SAMURAI MARATHON is available on blu-ray, DVD, renting or buying digitally from Amazon and those types of places, or you can stream it if you have Hoopla or Hi-Yah!. I took the time to look it up for you because I love this movie and want more people to see it. It might be my favorite of 2020.

P.S. There’s one part where a bear shits on a guy’s head though

Akihiro Dobashi Bernard Rose Etsushi Toyokawa Hiroki Hasegawa Hiroshi Saito Kikumi Yamagishi Mirai Moriyama Nana Komatsu Naoto Takenaka Ruka Wakabayashi Ryu Kohata samurai Shota Sometani Takeru Satoh
This entry was posted on Monday, January 25th, 2021 at 10:52 am and is filed under Action, Reviews, Sport. You can follow any responses to this entry through the RSS 2.0 feed. You can skip to the end and leave a response. Pinging is currently not allowed.